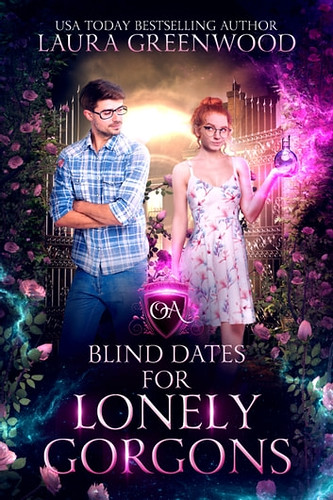 Blurb:
As a gorgon, Thalia has always avoided dating so she doesn’t risk turning someone into stone, but when her best friend convinces her to sign up for the Valentine’s Blind Date event, everything changes.

When Thalia meets Evander, there’s an instant connection, even if he doesn’t ask conventional first date questions. But will he still feel the same when he discovers the truth about what she is?

Blind Dates For Lonely Gorgons is a light-hearted gorgon academy m/f romance set at Obscure Academy. It is Thalia and Evander’s complete story.

I’ve been trying to read all the stories in the Obscure Academy series that are available so far and was in the mood for another Laura Greenwood book when I picked this one. Blind Dates for Lonely Gorgons was a fun paranormal romance story with a slight Valentine’s Day theme.

I really enjoyed Blind Dates for Lonely Gorgons, it follows Thalia who has avoided dating because she’s a gorgon, she can turn someone to stone with her gaze. Luckily she has special glasses that help, but she has still avoided dating. Until her best friend encourages her to try out a blind dating event and helps her get a special potion that will help her gaze not turn anyone to stone. Thalia gives it a try and connects with her first date Evander. They have a fun first date where he asks her unusual first date questions, it was such a fun first meeting scene. Then things turn into more, but Thalia struggles with how to reveal she’s a gorgon.

I really liked this story. It’s sweet and romantic. Evander and Thalia were great together and I liked the fun questions they came up with to get to know the other better. I liked how things got resolved and how Tahlia found a way to explain things to Evander. There’s a fun twist at the end and I also liked how the whole glasses thing was resolved. Thalia’s best friend was awesome and I liked how she was encouraging and supportive without being pushy and I look forward to her story.

It was fun to read about a gorgon, I haven’t seen many books about that species and I think this was the first book I read about gorgons. The whole struggle with the stone gaze and how it made Thalia avoid dating felt realistic and I liked how it was dealt with. I thought it was fun to see gorgons in a modern day setting and the way it all worked.

To summarize: This was another fun story set in the Obscure Academy world. I liked reading about Thalia and Evander, they made for a great couple and I liked all the fun questions they came up with to get to know each other better. I liked how things played out and the twist at the end. I liked reading about a gorgon and seeing how the author wrote about one in a modern day setting, the trouble with the stone gaze was interesting to read about. All in all another great read in this series.