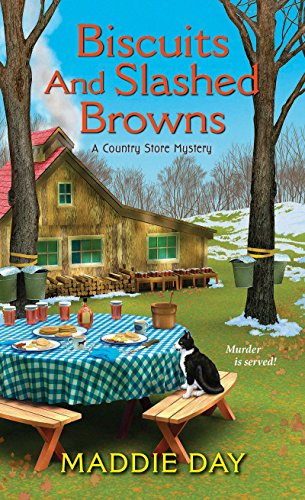 Blurb:
For country-store owner Robbie Jordan, the National Maple Syrup Festival is a sweet escape from late-winter in South Lick, Indiana–until murder saps the life out of the celebration . . .

As Robbie arranges a breakfast-themed cook-off at Pans ‘N Pancakes, visitors pour into Brown County for the annual maple extravaganza. Unfortunately, that includes Professor Connolly, a know-it-all academic from Boston who makes enemies everywhere he goes–and this time, bad manners prove deadly. Soon after clashing with several scientists at a maple tree panel, the professor is found dead outside a sugar shack, stabbed to death by a local restaurateur’s knife. When an innocent woman gets dragged into the investigation and a biologist mysteriously disappears, Robbie drops her winning maple biscuits to search for answers. But can she help police crack the case before another victim is caught in a sticky situation with a killer?

My Review:
I received a copy of this book from the publisher through Netgalley and voluntarily reviewed it.

This is such a great cozy mystery series and I was eager to start this book and follow another adventure of Robbie Jordan and her friends. This book had a lot of the same elements I look forward to each book, the pans and pancakes store and the days Robbie spends working there, the descriptions of some delicious sounding food, a good mystery and a great group of friends and family who surround the main character.

In Biscuits and Slashed Browns the mystery surrounds a professor who has been killed during the annual maple festival. There are multiple suspects, but almost everyone is hiding something. While I really enjoyed this book, for some reason the mystery didn’t grab me as much as some of the earlier books. It still was a good mystery tough. I liked how there are lots of secrets and for a while I wasn’t sure who had done it as there were so many things unclear. When the murderer was revealed, I wasn’t too surprised as it was one of the few suspects left at that point. Not a big surprise, but it was a good build up with lots of hints slowly being revealed over the course of the book.

One of my favorite parts of this series is seeing the side plot lines about Robbie’s personal life continue, there is some progress with the bed and breakfast rooms she’s working on, her father will come to visit soon (I hope that’s in the next book), some developments with her employees in the store, her love life with Abe is part of the book again and I am sure I am forgetting some other things. There’s a nice amount of continuity in this series and that makes it extra fun to read in order.

Robbie is a great character to read about and I liked how most of the time she makes smart decisions. There is this scene in this book were she’s going in a potential dangerous scene and actually calls for backup, which I thought was nice. She doesn’t run headlong into danger, although the danger does manage to find her.

I also liked catching up with the side characters and meeting a few new ones, like Turner. The maple festival was a nice backdrop, although there’s not too much focus on it, except for a few scenes. There was a baking competition and some mentions of other events. I also liked how Robbie works in her store every day it was open, I liked how her store was her first responsibility and solving the puzzle would come in her spare time.

To summarize: another great read in this series. I always like returning to this series and following Robbie as she solves another mystery. It was a good mystery with lots of suspects and everyone seemed to be hiding something. I wasn’t too surprised when we found out who the murderer was, but there was a good build up toward it. I also like the side plot lines about Robbie’s life, her friends and the store. And there is a nice amount of continuity in this series.

Do you like books with lots of secrets that get uncovered?

12 responses to “Review: Biscuits and Slashed Browns by Maddie Day”