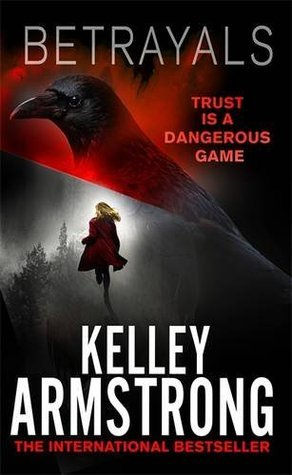 Blurb:
Olivia Jones knows a lot about betrayal – most of her life has been a lie. On the eve of her wedding, she discovered she was adopted – and that her biological parents were convicted serial killers.

Liv has found sanctuary in her new home of Cainsville, but she’s learned not to trust the town’s mysterious elders. So when her biker boyfriend Ricky Gallagher is linked to a series of murders, she’s reluctant to ask for their help. Meanwhile things have grown increasingly complicated with Gabriel Walsh, her boss and sometime friend. The fact that their fraught relationship is connected to an ancient myth in which they were passionate lovers doesn’t help matters, either…

As Liv fights to clear Ricky’s name, she discovers that her own life is at serious risk. Soon Ricky, Liv and Gabriel are tangled in a web of a betrayals. In order to survive, they will have to trust one another. But given their dark history, is that even possible? Or wise…?

My Review:
This review might contain some spoilers for previous books in this series.

I love this series and this book was no different. From the moment I started reading I got that feeling of contentment you have when reading a very good book. The pages easily slipped by and I didn’t want to stop reading. I love the way Kelley Armstrong writes her stories, her writing style really works for me. The story flows so well and it feels like there never is a dull moment. Every scene and every interaction has my attention. I get sucked into the story. This book left me feeling happy and content as it was such a good read and I enjoyed every page of it.

Reviews for books I love are always the hardest the write and even more so when it’s a later book in this series. Because even though this is a new book, it has the same things I’ve grown to love from the previous books. The interesting characters, the slight paranormal element and mystery mixed together in a compelling storyline, the relationships and romance between the characters and seeing how it all progresses slowly. And I almost fear that I will just be repeating myself from reviews for previous books in the series.

When I reached the last page I just wished it wasn’t so long to the next and last book in the series and at the same I don’t mind the wait as it will be something to look forward to. Yes I am very curious how this series will end. I felt that this book really read like book 4 of the 5. Things were set-up for the next book, characters changed and at the end I felt like the pieces were in place for the series finale.

Like in every book there is a bit of a mystery, the mystery and investigations always add something to these books. In this case Liv is investigating the deaths of some snake type of Fae. Then there is a broken hound they find and the two camps of Fae are tied into the mystery as well. I thought it was well done and I liked the twist at the end. I had expected a bigger Betrayal though, yes there is a betrayal, but I had expected worse with it being the title of this book and then in the book Rose hinting towards it.

One of my favorite parts of this series are the characters. Liv is such a great character to read about. She isn’t perfect, but she is a realistic and an interesting character. I like her point of view and perspective on things. I also liked seeing her relationship with Ricky and Gabriel develop. All three of them change quite a lot in this book. It really becomes obvious the focus is on these three now. They learn more about Matilda, Gwynn and Arawn and even see themselves in parts of them, but at the same time being their own personalities as well. Normally I am not a fan of reincarnation type of stories, but I thought it was handled well here. There are visions and omens and there are hints about the choice Liv has to make, but the choice stays a bit on the background in this one.

In the first 3 books it was obvious there would be a love triangle, but in my opinion it only turns into one in this book. And I don’t mind at all, I would even say it makes me a bit happy. Because I love Gabriel and Liv together and want nothing more than to see them end up together. Gah I can’t explain how much I enjoyed reading the scenes were they are together. There are some really good ones, there this scene in his apartment that just made me so happy, their interactions are so much fun to read. While their relationship would be difficult I do think these two belong together. Gabriel is a bit broken, having had a hard youth and he doesn’t think the same way as others, but that’s also the part what I like. He has such an interesting personality and unique view on things and he cares in his own way and there are some gestures he makes in this book that were just so sweet and awesome and still totally Gabriel. And the chapters from his point of view are a real treat.

And then there is Ricky, while I always liked him and even like him and Olivia together, there is something she has with Gabriel that lacks with Ricky. And I want that for Olivia. On the other hand Ricky is so considerate and nice at times I just feel bad for him. He knows he might only have her for a limited time and is okay with that. He tries to be mature and laid back about the whole thing. And then there is the ending, the way this book ends that makes me sad and so curious about the next book at the same time.

To summarize: this book was a joy to read. Reading this book just made me feel happy and content. Reading one of Armstrong her books is like coming home. I love this series and betrayals is a great fourth book. It continues themes set up in earlier books and also sets the stage for the last book. There is a mystery that is mostly solved in this book and it was an interesting one. The betrayal mentioned in the title wasn’t as bad as I had expected, although it was a nice twist. I liked seeing the characters change and develop in this book. And in this book it feels like the potential love triangle really turns into one. And I am glad about that partly as I want Liv to end up with Gabriel. The scenes where Gabriel and Liv interact are amazing to read, it makes me happy just reading about them interacting. I think Armstrong handles the love triangle really well. Both Gabriel and Ricky are good for Liv, but in different ways. Liv her relationship with both of them is very different. It’s interesting to read about. And Gabriel is such an interesting characters to read about, his view and perspective so unique. I like that we get his and Ricky his point of view a few times as well. All in all this was a great read and I can’t wait for the fifth and final book in this series to see how things will get wrapped up.

Tell me about an author who’s writing style really works for you?