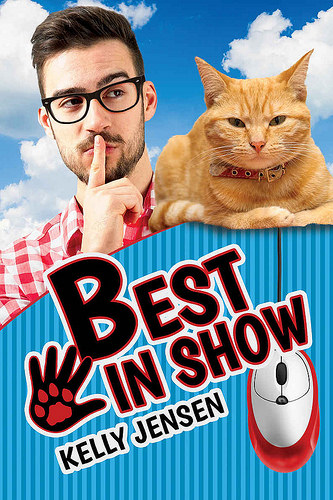 Best in Show
by Kelly Jensen

Blurb:
Solitary mystery writer Julian Wilkes doesn’t want a pet, but his sister persuades him to visit Lingwood Animal Rescue, where he is immediately taken with a large ginger tabby cat. Before he can settle into the joys of cat ownership, however, he discovers something very unusual about his new companion.

Macavity Birch is cursed. By day he is a large tabby cat. At night he can be himself—a human male with ginger hair and oddly yellow eyes. He didn’t mean to end up in the animal rescue, but he never meant any harm when playing the prank that resulted in his curse, either. Happily, Julian adopts him. But while exploring his host’s home, he discovers the diary of a long-dead relative.

Unfortunately, not all of Mac’s ancestors are dead and buried. His great-great-great-grandmother is very much alive, and she’s a powerful witch who doesn’t take kindly to the sharing of family secrets. When Mac reveals himself to Julian in order to save him from bigger trouble, he achieves just the opposite, plunging Julian deeper into a magical mystery with him.

I really liked the premise of this book and that’s mostly the reason I bought this one. And after reading and enjoying two of this authors other books already I bought this one and hoped I would enjoy this one too. Best in Show is a fun short read about a mystery writer who adopts a cat, who actually turns out to be a shapeshifting human.

This was a very fun and enjoyable story. I really liked the story and the whole premise with Mac being stuck in cat form and Julian adopting him and thinking he was a normal cat. And then the shock when he finds out he isn’t a cat. It also was fun to read about a shape shifter who turned into a normal house cat. I thought it was a fun twist on the standard shifters and it made for an unique story too. Seeing Mac’s point of view as a cat was well done too.

My main complaint about this book is that it was too short. It was such a fun read and I just wanted it to be longer. There were some parts at the ending that felt a tad rushed, but the first half or so was well paced. The romance also developed a bit quickly and I would’ve liked to get a better feel for both main characters.

Having said that I did like both main characters. Mac was a bit mischievous, but eventually also realized that not all of his pranks were funny and he did have a soft side as well. Julian had a bit of a hard break-up and has lost his way after that and Mac and a diary he finds change that. It was nice how we got a bit of a feel for their personalities, although I would’ve liked to read a bit more about them.

The romance develops a bit quickly, but I did like these two together. I just would’ve liked to see a bit more of them and them together. There is a bit of heat towards the end and a bit of a happy for now ending.

We learn a bit about how magic works, that there are witches and shifters and a bit of history of the town involving some of the witches. The diary plays an important role in that part of the story. I just wish this part was delved into a bit more as it felt like there was room to work this concept out a bit more and learn more about the world.

To summarize: this was a fun and short read. I liked the premise with mac being cursed and stuck in his cat skin and then getting adopted by Julian who thinks he is a real cat. There were some great scenes and I enjoyed reading it, but it was a bit on the short side. I liked how we got a feel for the main characters, but would’ve liked to get to know them a bit better. The romance felt a bit rushed and I didn’t fully felt their chemistry. I liked reading about these characters and there also is an interesting plot line surrounding the town and the witches. The end felt a bit rushed and like some parts could be explored and developed a bit more, but I had fun reading this. If you’re looking for a short and fun read with an unique take on the paranormal romance genre, I would recommend this book.\

Tell me about a shifter book you read where a character shifts in an unique or non predator animal?

6 responses to “Review: Best in Show by Kelly Jensen”