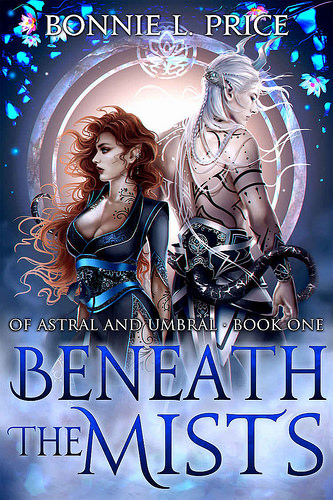 Beneath the Mists (Of Astral and Umbral #1)
by Bonnie L. Price

Blurb:
Their world is broken and so are they.

Arianna is an outcast. Her affinity for darkness terrifies those around her. Haunted by dreams of another time, she doubts if she even belongs among her people. Rather than dwell on fragments of a forgotten past, she dedicates herself to protecting her twin brother and their people from the monsters beyond the city walls.

The God of Balance, Nalithor, was born a Devillian prince. Twisted monstrosities and unhinged deities are a threat to the world’s mortals. His duty is to restore order, yet his superiors block every move he makes.

In order to salvage their world, Arianna and Nalithor must overcome their foes. However, they must put themselves back together first…or Avrirsa will fall.

Disclaimer: The Of Astral and Umbral series is not a clean read. Expect swearing, violence, and mature themes.

My Review:
Once I saw the amazing cover for this book I knew I had to read it. I didn’t give much more than a passing glance at the blurb before I bought my copy. While this books has a lot of potential and some amazing world building, the story was slow paced and never fully grabbed my attention. It left me with mixed feelings as the world building is so amazing and I feel sad the story didn’t pull me in as much as I had hoped.

Beneath the Mists is told from dual point of views of Arianna and Nalithor. Arianna lives in a floating city hidden in mists where the people fear her magical powers and her only role is to protect her brother and the city from the beasts that roam around the city. Nalithor lives in the Devilian city below, he is the god of balance and still mourns the loss of a girl named Arianna that he used to know. When reports come in about a floating city they discovered and a prince and princess that remind them or Arianna and her brother he goes to investigate.

I felt that the story was a bit slow paced. It’s not that there are a lot of necessary scenes, in fact I would have a hard time stating which scenes would be scrapped, but it felt like the main plot line crawled forward. And then when finally something big happens, it’s at the end of the book and the book is over. I just felt that the big plot line progresses very little and the focus is more on small things and getting everyone in place and ready for what happens at the end of the book. I also felt like this book read more like an introduction and build-up for future books, but this book itself seemed to resolve very little and we get almost no answers or reveals or any kind in this book.

While I really like dual point of view in general, I feel that this book might’ve worked better from one point of view. Having both point of views kinda ruins any tension, mystery or suspense this book could’ve had. I guess creating some mystery isn’t the point of the story, but I felt like I would’ve enjoyed the plot more if I would’ve been more in the dark of who these characters are. I also wasn’t a fan of the memory erasure plot line in general, it just seemed like a way to get the tension up, which might’ve worked if we only had one point of view, but failed to really create any mystery now and just frustrated me.

Both characters have different information and as the reader you know what they both know and can piece the pieces together. But the characters don’t know what the other know and never put those pieces together, so I spent a big chunk of the book hoping they would talk and figure things out, but that doens’t happen in this book. The thing I am curious about is seeing how they will react when they do realize who the other is. I just would’ve liked a bit more build-up as now from about chapter 3 or so I was pretty sure I figured out what the twist/ reveal would be and by the end of the book that reveal still hasn’t happened.

For the most part I did enjoy the story, it was decently written and I was curious to a degree what would happen next. But it just failed to fully pul me in, I am not even fully sure why. There are some disturbing parts in this book. Like the way Arianna is treated by the people on the island which is totally despicable. And the way she is tortured is even worse. There also is a flashback/ dream/ memory of a scene in limbo which was quite gruesome too. So there are some dark touches to the story, but they don’t overshadow the rest luckily.

I liked getting to know Arianna and Nalithor a bit, but I felt like both weren’t as fleshed out as I would’ve liked by the end of the book. At times I felt it hard to fully feel their emotions or feel what they thought or felt about things. Although there are some thoughts that we get to read so that helped. Arianna seemed almost resigned to her fate and the only thing that made her happy was killing beast. Some killing scenes are described in a bit too much violent detail for me and I wasn’t sure I liked that side of her. Nalithor is apparently a god, but we hardly ever see him do anything god related. So I wasn’t quite sure what his status meant or what he actually did as god of balance. He still seems to mourn the Arianna he lost, but then is quick to dismiss this Arianan as being someone else. Why wasn’t there a way to determine who she is, so they know for sure?

The main focus of the book is one the two main characters, but there are some fun side characters. I liked the Fae dragons and there are two friends of Nali that seemed nice too. The whole thing with there being guardians in this world was quite intriguing as well. But we don’t get to know the side characters as much as I would’ve liked. I didn’t really care for Darius and I never got a good handle on what Darius and Arianna thought of each other, with the weird difference in how they were treated and their rang in this society it was hard to get a grip on what they did think of the other and how close they were.

Another thing that about this book was that I went in with wrong expectations. I had seen on the author’s website that this was a fantasy romance series. And the cover and blurb seemed to support that. But I would describe this book as having only a hint of romance. It has the set-up and building blocks, but except for a weird flashback/ dream/ memory scene in which they share a weird kiss, there is no romantic notions whatsoever. They don’t even talk with each other, the most they communicate is the letter she wrote him. I just felt a bit disappointed as I had expected more romance. It likely will turn more romance-y later on in the series, but this book I would categorize as fantasy not fantasy romance.

Despite all my issues with this book, there was one part of this book that I loved and that’s the world building. The world building was easily my favorite part of this book. From the first page it’s clear that the author knows her world very well and everything seemed to have been thought out. There are different races and cultures and the landscape looks different. There are unique names for most races and while some have a hint of more common races like demons or elves, each one still felt unique. There are words for locations, honorifics they use and it all helped the world come alive. There seems so much lore and depth in this world, that just for the world building only I wanted to read this book to explore the world. There is a scene toward the end where part of the world gets described, that was so intriguing. It’s rare to find a book with so well done world building, I am just sad the story and characters didn’t pull me in as much as the world did.

To summarize: This book has a lot of potential and promise, but didn’t fully work for me. The world building was really well done and it’s obvious the author really thought out the whole world. But the story failed to fully pull me in, even tough I liked the story well enough. I liked reading about the characters, but didn’t fully warm up to them and felt like I didn’t know as much as I would’ve liked about them by the end of the book. And while I liked the dual point of view in this book, I felt that having only one of the point of views would’ve created more mystery and tension as now you knew more than either of the characters and could piece things together they didn’t know. There is very little romance in this book, only a hint of and a set-up for a future romance, but they barely even talk to each other in this book and only meet each other once basically. The world building was my favorite part of the story and I am impressed by how the world came alive and all the different words and races. I just wanted to know more about this unique world and I am sad the story and characters didn’t pull me in as much as the world did.

How important is world building for you in a book?

6 responses to “Review: Beneath the Mists by Bonnie L. Price”