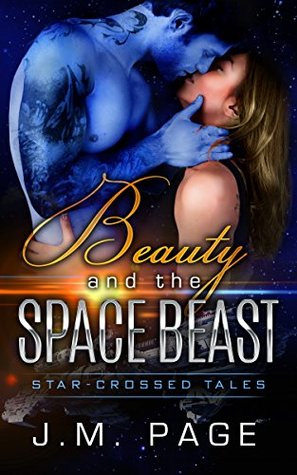 Blurb:
Beauty
Mara Duport has always dreamed of home, a place where she belongs. She knows that she has one, but ever since she was a kid, her dad’s been keeping the secret of her origin locked away, refusing to give her any information.

Dad’s been keeping more than one secret. He’s in debt — a lot of debt — and the ruthless pirates he borrowed the money from are coming to collect.

The pirate captain is renowned the galaxy over for his brutishness and cruelty — but when Mara sees his stoic face, her heart races, her mouth goes dry… and she offers herself as payment.

Space Beast
Torak of Basniel has a fierce, uncaring, ruthless reputation to live up to. So when a beautiful, innocent woman offers herself up to him on a platter, Torak doesn’t think twice. What does he care about stealing away this man’s precious daughter?

But Torak gets a more than he’s bargained for. Mara’s more than just innocent — she’s also intelligent, skilled, beautiful — and she can see right through him, past the thorny exterior, down to the heart he thought died long ago.

Torak knows he’s an irredeemable monster, but with Mara he feels different. He sees the opportunity to be more than what’s always been expected.

Mara knows that there’s something beautiful and redeemable inside Torak, and she won’t leave him until he finds it.

Not until she can tame the beast.

Beauty and the Space Beast is 50,000 words of exciting, page-turning, romance with strong themes of self-discovery and adventure. This book contains NO harsh language, explicit violence, or graphic romance scenes. It is an adult romance, but is suitable for older YAs as well. I hope you enjoy!

Beauty and the Space Beast was a fun read and I would definitely recommend it to people looking for a fun sci-fi fairytale retelling. I did a have a lot of small issues with things that happened, I won’t go into too much details, but it reduced my enjoyment of the book a bit. I think that some topics could’ve used a bit more depth, some things happened a bit fast and some topics could’ve used a bit more expanding. Like the topic about Mara her homeworld, it was an interesting plot line, but I felt by the end it got solved a bit too easily almost, although I did think the twist surrounding that was interesting.

I felt like the fairytale retelling aspect was a bit more subtle than in the first book, but that could also be because I am less familiar with the Beauty and the Beast story. Although there were a few times where it felt the characters acted a certain way because they had to fit the pattern of the story instead of it really feeling natural, but that might be just me. The sci-fi setting gave a bit of a different feel to the story than than the original story and it wasn’t as easy to figure out who in this book was which character from the original story.

This book follows Torak and Mara. Torak is a Basniel alien and the the beast part refers not to his appearance, but more to the reputation the sons of Basniel have. They are brutal and evil. Torak acts that was as well, because why act differently if everyone expects him to act in such a way anyway. But even with his reputation of being mean and evil I thought he didn’t really act all that evil in this book. That’s probably to make him more likeable, but I would’ve liked to see a bit more of his ruthless side before, so that his change would’ve felt like a bigger deal. I thought he acted pretty nice most of the book and even at the start of the book when he takes Mara as payment, he’s just collecting debt. He doubts himself and if he’s worthy of love and such, but at the same time he has this super loyal crew around him that already should’ve proved that part. But he doesn’t have enough hope to be different and actually try until he meets Mara.

Mara always wanted to travel and see more of the galaxy, but her old father needs her so she never strays far from home. She knows her father keeps some secrets from her, which bothers her. Then when Torak comes collect a debt her father own him, she volunteers to serve on his ship as payment, which gives her the chance to finally follow her dreams or exploring. I liked seeing how the characters change throughout the story and found out new things about themselves. Their romance developed quite fast, but I still liked how the author took some time to see them getting to know each other. There are some sweet scenes between them when they get to know each other. I didn’t much care for the conflict and miscommunication, but I guess it made sense they had to work through a few things.

I would’ve liked to see a bit more of the world building as it’s pretty light on the sci-fi aspect, world building and descriptions. The focus is more on the story it’s telling than on making the world come alive. Which is okay, but I would’ve liked to get to know a bit more about the galaxy. Or who was an alien and what type, what they looked like, what the different cultures were like or even what Mara looked like besides her hair color. Half of the time I even forgot some of these were aliens. A few of the sci-fi details felt a bit off to me, that’s not to say it’s not realistic as I don’t have too much knowledge about that either and who knows what space travel really will be like, but it didn’t fit the image I had from other sci-fi books and tv series. Just few parts that seemed slightly unrealistic or off to me.

To summarize: This is a fun story and I enjoyed reading it. It’s pretty story focused and gave a new twist on the Beauty and the Beats fairytale. It is a fairly short read and I did think some parts lacked a bit of depth because of that or topics that could’ve been expanded upon a bit more. The retelling parts felt a bit more subtle in this book, but that also could be due to me being less familiar with the Beauty and the Beast story. I did like the romance even though it developed a bit quickly, there were some sweet scenes between them and I did like that the author took a bit of time to show them getting to know each other. The book is pretty light on the sci-fi and I would’ve liked to see the world come alive a bit. A few sci-fi details felt a bit off or unrealistic to me. Overall this was an enjoyable story, despite the many small issues I had with it and I am looking forward to the next book!

What fairytale do you like to read retellings of? What’s your favorite fairytale?

22 responses to “Review: Beauty and the Space Beast by J.M. Page”