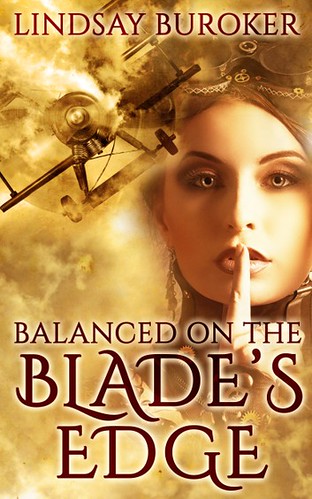 Blurb:
Colonel Ridge Zirkander isn’t the model of military professionalism—he has a tendency to say exactly what’s on his mind, and his record has enough demerits to wallpaper the hull of an airship—but as the best fighter pilot in the Iskandian army, he’s used to a little leniency from his superiors. Until he punches the wrong diplomat in the nose and finds himself issued new orders: take command of a remote prison mine in the inhospitable Ice Blades Mountains. Ridge has never been in charge of anything larger than a flier squadron—what’s he supposed to do with a frozen fortress full of murderers and rapists? Not to mention the strange woman who shows up right before he arrives…

Sardelle Terushan wakes from three hundred years in a mage stasis shelter, only to realize that she is the last of the Referatu, the sorcerers who once helped protect Iskandia from conquerors. Their subterranean mountain community was blown up in a treacherous sneak attack by soldiers who feared their power. Everyone Sardelle ever knew is dead, and the sentient soulblade she has been bonded to since her youth is buried in the core of the mountain. Further, what remains of her home has been infested by bloodthirsty miners commanded by the descendants of the very soldiers who destroyed her people.

Sardelle needs help to reach her soulblade—her only link to her past and her last friend in the world. Her only hope is to pretend she’s one of the prisoners while trying to gain the commander’s trust. But lying isn’t her specialty, especially when the world has changed so much in the intervening centuries, and if Colonel Zirkander figures out who she truly is, he’ll be duty-bound to sentence her to the only acceptable punishment for sorcerers: death.

After I read Lindsay Buroker’s Fallen Empire series I decided to try one of her other series. I got the box set that contained the firs 3 books in this series and decided to give this a try. I enjoyed this story. It has the same writing style, vibe and humor that I’ve grown to expect form Lindsay Buroker’s books. And I enjoyed trying out one of her fantasy books now. This was a fun read and I enjoyed reading it.

Balanced on the Blade’s Edge is told from dual point of views. There is Ridge who is a great flier, but doesn’t always respect authority as much and after punching the wrong person in the face he gets shipped off to manage a prison mine instead of flying in his steampunk dragon flier. That he isn’t happy about that is an understatement. The other main character is Sardelle, who wakes up in a mage shelter and realizes 300 years have passed since she went to sleep there. She has to pose as a prisoner until she can retrieve her soul blade. So while they both have their own problems, they also get tangled together when they meet and then there’s the threat of an enemy airship that’s threatening the prison.

This was a fast past and engaging story. I liked the two main characters and how we got a good feel for their personalities. I liked how they both landed in situation that was outside of their comfort zone. I liked seeing them adapt to the situation they found themselves in. I liked how Ridge had this unconventional way of doing things. It did seem a bit weird how he trusted a prisoner, but I liked seeing their relationship develop. Sardelle is totally out of her element in this new time and has to learn what has changed. I especially liked her conversations with her sword with whom she has a telepathic bond and her powers were pretty cool too.

The story is pretty straightforward and progresses fast, with some character dynamics and the threat of the enemy airship. One the one hand I liked the small scope of this book and how we only see what happens at the prison, but at the same time I was curious to see more of the world and what was happening there. This book reads easily as a standalone and after finishing it I am actually not sure where the series will go next, but I definitely plan to continue the series as I enjoyed this book. The epilogue nicely wraps things up.

I liked the romance between Ridge and Sardelle and how they end up helping each other. I did think it developed a bit quickly, but I did like them together. There are some great conversations and interactions between the two of them and I liked reading their scenes and seeing what they thought of the other.

The world building is pretty limited in this book. We mostly see a bit about Sardelle’s powers and get some information about the current state of the world as well as the past state, but it’s pretty limited and it was hard to really form a good picture. Then again that wasn’t really necessary for this book as everything you need to follow the story is there. I look forward to seeing more of the world in future books hopefully.

To summarize: This was an entertaining fantasy romance read with a bit of action and steampunk elements. I had fun reading this story and I liked trying out another series and genre by this author. I like the author’s writing style and brand of humor. Ridge and Sardelle were great characters to read about and I liked how we got a feel for their personalities quickly in the story. Their romance develops a bit fast, but I liked them together. The ending wraps things up well and this book can easily be read as standalone, while I am not in a hurry to continue the series I am curious to see where the series goes next.

2 responses to “Review: Balanced on the Blade’s Edge by Lindsay Buroker”