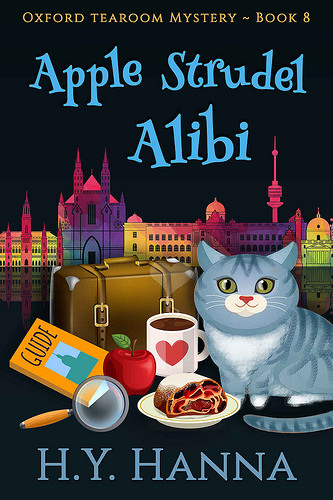 Blurb:
When Gemma’s romantic holiday with her boyfriend is cancelled, the tearoom sleuth finds herself heading to Vienna instead, with her cat Muesli and the nosy Old Biddies for company. And it’s not long before they stumble across a murder right in the heart of Austria’s historic capital.

A handsome art critic dies suspiciously at their hotel and the Old Biddies are determined to sniff out the killer. Is it the bitter hotel owner nursing a grudge? The critic’s jealous mistress wanting revenge? Or even the visiting American who seems inexplicably nervous around the police?

Soon Gemma is dragged into an impromptu investigation which has her tackling Vienna’s famous pastries, snooping in police files and even braving a nude sauna in search of clues!

But can she sort the suspects from the Schnitzel, and solve the mystery before the killer strikes again?
(* Traditional apple strudel recipe included at the end of the story!)

This is one of my favorite cozy mysteries series and I was excited to start this books. Sadly I feel like I picked it up in the wrong mood as I didn’t enjoy it as much as I usually do. This book switches things up and takes place in Austria instead of the usual setting in oxford. And ofcourse Gemma gets involved in a murder mystery there as well, in between the sightseeing.

I was curious how the change in setting would work. And while on the one hand I thought it was fun to visit a different place, on the other hand I missed the usual feel and setting of this series. Now it read half like a travel book with Gemma visiting some famous sites in Vienna and experiencing the city and the mystery got a bit of a backseat. It also lacks a lot of the usual side characters and instead there is a bunch of new side character. The Old Biddies are there as well as they travel with Gemma.

The mystery somehow failed to fully grab my attention. It takes to about 30% of the book until the murder takes place and it’s one of those murders were the police are convinced it isn’t a murder and the main character believes otherwise even with lack of strong evidence to the contrary. And at the same time the police seemed to dismiss it a bit too easily as well. And while it wasn’t my favorite mystery it was wrapped up well and I liked how looking back there are a bunch of hints pointing to the murderer.

What was interesting about the mystery was that with the hotel setting it took place, that meant there is only a limited amount of suspects, which was a nice touch. You know it’s one of the hotel visitors or staff. The mystery progresses slowly and there isn’t as much investigating as in the other books. It also felt a bit too convenient how Muesli accidentally uncovers two big clues and I am not sure how the mystery would be solved without those. I also wasn’t too happy with how Gemma uses Devlin’s guilt against him to have him investigate/ look up something for her.

With the book taking place in Vienna we saw some different side characters. They all get introduced in the start, but most were easy to remember who was who, although I got confused about two side characters at first. But I just missed the usual cast of characters and setting a bit that I’ve come to expect from this series. There’s a quirky American tourist who loves horses, a Chinese family, a talkative women with her mother and some Austrian characters related to the art business. We find out more about them over the course of the book which was nice.

I am not too sure how I feel about the plot line surrounding the Chinese family. The mother seemed to focused on a good career for her kid, while repressing her love for art and animals,which didn’t seem right. But at the same time I didn’t feel fully comfortable with how Gemma inserted herself in that situation. And thought it was a tad realistic how they trusted someone they only met two days with their kid and the change at the end felt a bit abrupt. Although the little girl was adorable.

It was fun that the Old Biddies went with Gemma on her vacation, but I felt they are more fun to read about in the usual setting. But there were some great scene with them and it was interesting seeing them in a different setting. Muesli also went with them to Vienna so the cat does make some appearances as well.

To summarize: Sadly I didn’t enjoy this book as much as the previous books. The mystery is well put together, but I felt the balance with the other elements in the story was a bit off. There was a bunch of sightseeing and touristy stuff which I didn’t care as much for and it lacked the usual feel of this series. The mystery was a bit slow to start and it felt it got less focus than in the previous books. The mystery was well done and I liked how there are some hints to the murderer throughout the book. But the mystery didn’t grab my attention as much as usual. The change in setting brought a new cast of characters that we get to meet and some familiar ones that paly a role too as the Old Biddies and Muesli go to Vienna as well. All in all not my favorite of the series, but still a decent read and I am looking forward to the next book.

Do you like changes in setting in a series?