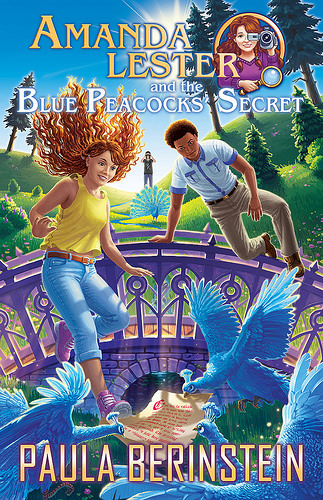 This series is so much fun! And this is another great book in this series. I like how smoothly the story continues form the previous books. It’s absolutely necessary to read this series in order as else it probably will be confusing and the fun part is seeing how nicely each book progresses and continues the storylines from the previous books. Every thing that happens has results and storyline that got set up in the previous books are continued or even finished here, while other storylines progress, but still get nowhere close to being finished and new storylines get introduced as well. There’s also a plot line that sees little progress the whole book and then get’s neatly wrapped up at the end after all.

There’s definitely a lot going on and I liked all the multiple plot lines and how nicely the author has woven them altogether and never it was confusing. This book si very well written and I always have a lot fo fun following Amanda and her friends their adventures. This book deals with everything from the detective’s bible, peacocks, Nick, the bad guys, the wretches to and archaeological dig. I did have some trouble with the last one as it seemed a bit too far fetched what they dig up, I just couldn’t wrap e head around it. But I did enjoy how that plot line got resolved and it suddenly made a lot more sense at the end. The science does seems to almost jump into fantasy territory, so I would classify it as a mix of both. There are also some nice twists and surprises. I was a bit sad at some of the things that happened, but also pleasantly surprised at how some things got resolved.

This series has a great cast of characters, it depends a bit on the book who get’s the most attention. Some are more side characters and other just fill up a scene here and there. There are also some character who are very little in this book for story reasons. There are some interesting changes concerning the characters. Some relationships and friend bonds develop or change a bit. A few twists and bad things that happen to some. We also meet some new characters in this book, which was interesting. And in each book it feels like I get to know the characters better, especially Amanda and her friends. I really liked the Nick plot line in this book and am looking forward how that continues in the next book. Oh and I liked the peacocks, they were adorable!

There’s a bit more romance in this book, not a whole lot, but a bit more than in the previous ones. It really develops in a love triangle at this point. I am team Nick, but Holmes is also a great guy, but I think Amanda and Nick are better together, but argg why doesn’t Amanda explain to him how she feels? It’s quite frustrating but I also enjoy how the romance develops. I just wish Amanda would figure out who she wants to be with.

To summarize: another great book in this series. This series is a lot of fun and the continuity is great. There are some storylines that were set up earlier already and continue here, some get resolved and other probably will continue further in the next book. There is lots of things going and it makes for an exciting read. It’s very well written. There was one storyline I wasn’t a fan of, but eventually was happy with how it got resolved. There are some nice twists and surprises in this book as well. This series has a great group of characters and it’s fun getting to know them better and seeing them change and develop. There’s also a bit more romance than in the previous books and it’s turning into a bit of a love triangle. While it is realistically written, it’s also a bit frustrating as I want her to end up with Nick. All in all another great book in this series and I am looking forward to the next one.

What’s the last later book in a series that you read?

12 responses to “Review: Amanda Lester and the Blue Peacocks’ Secret by Paula Berinstein”