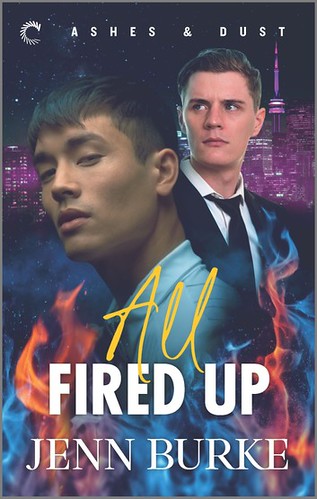 Don’t miss this riveting and romantic spin-off series from Jenn Burke, author of Not Dead Yet.

Paranormals are dying. All over the city, with no explanation and only one thing in common: their magic is missing.

Vampire and private investigator Evan Fournier isn’t supposed to be taking on paranormal cases, but when the murderer hits close to home, he agrees to look into it. The last thing he expects is to become a target himself—and then to become irrevocably bonded to the man who just tried to kill him.

With his memory gone and his soul bonded to a stranger, former firefighter Colin Zhang wants to be anywhere else. He doesn’t have a damn clue why he just tried to kill Evan, and he didn’t even know about magic until just now. The sooner he can get back to his real life, the better.

But every time either of them tries to leave, pure agony stops them short. Forced to work with Evan or suffer the consequences, Colin must excavate the secrets buried in his missing memories while battling two rising threats: the conspiracy behind the murder, and his mutual attraction to the bond mate he never wanted.

All Fired Up is the first book in the Ashes and Dust series. This is a spin-off series of the Not Dead Yet series. All Fired Up follows the point of view of Evan, who was an important side character in the Not Yet Dead series. I was excited to dive into this new series and it has the perfect mix of familiar with fresh.

It’s great returning to the familiar world and characters, but it also feels fresh with Evan now being the main characters, new side characters and a new paranormal mystery.

It took me a bit of time to get into the story, not quite sure why. Evan is a bit older than the last time we saw him and has changed a bit, but is still the same person. I like how he is quite different from Wes, the main characters from the previous series. There are also characters we see more of now than in the first series or see a different side of now. I would recommend to pick up the Not Yet Dead series first just so you know a bit of the background and know the characters, but besides that this one can be read as a standalone.

All Fired Up is a great start to this new series. While Wes and Hudson are away visiting a relative, Evan gets pulled into a new paranormal mystery. Someone is draining paranormals of their magic and he is determined to find out who is behind it. It starts with a bit of undercover investigating and there’s quite the twist, before it settles into trying to find out more about the culprit and how to catch them. The mystery has a wrap up in a sense, but also feels like the start of more, which makes me look forward to the next book.

I liked Evan in the previous series and I am glad he gets his own story. He’s kind and helpful and I like how much he cares about his newfound made family. He has been through a lot and this book touches upon some of his mental health struggles. It was handled well and while it doesn’t take the foreground, it’s also clear this is something he will always struggle with.

The romance is still a very tentative start, but so far I like it. Colin is a great person and I liked Colin and Evan together. I look forward to seeing how their relationship progresses over the course of the series. Colin has his own struggles and has been through some big things as well. They both have their own struggles to deal with and I liked how they slowly start to lean a bit on the other and get comfort form the other. The slow build up felt fitting given what they’re both dealing with.

To summarize: This was a great start to this new series. It’s a spin-off from the Not Dead Yet series, but follows a character who was previously a side character, while the main couple from the previous series is more on the sidelines. I liked spending more time in this world and with these characters and this book felt both fresh and familiar. There is a paranormal mystery that Evan has to solve and some bad things are going down. I like Evan as main character and the slowly blossoming romance between him and Colin is great to see. While this book has a satisfying ending it leaves a lot of questions open and sets the stage for book 2, making me curious to see what happens next.

One response to “Review: All Fired Up by Jenn Burke”