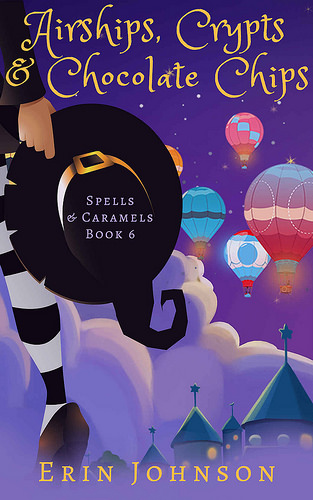 Blurb:
A bewitched prison. A brother with a deadly request. Can a magical baker launch a jailbreak and still keep her prince in the process?

Imogen’s magical bakery is thriving and she loves the company of the Water Kingdom’s dashing prince. But she’s not so enamored with the time she’s forced to spend with his awful Royal Family. She also can’t help but worry that the increased media scrutiny could reveal her secret contact with the Royal Family’s sworn enemy: her own brother.

When her sibling shows up and demands Imogen spring his cronies out of jail, she flat out refuses. But when he threatens to hurt the ones she loves the most, she balances her allegiance to the prince with her plan for a covert prison break. Can Imogen keep up family appearances and avoid betraying the kingdom or will her pie-in-the-sky scheme become a recipe for disaster?

I am really enjoying this paranormal cozy mystery series. In this book Imogen and her friends visit the air kingdom. It’s fun to visit another place and there’s another mystery and another adventure waiting. And ofcourse more baking, some romance and the awesome friendships I’ve grown to expect from this series.

Imogen and the rest of the bakers are taking over for the air bakers while they’re visiting the air kingdom so the air bakers can get some time off. Imogen also has royal parties to attend now that her relationship with Hank is out in the open. And then Horace arrives and demands she and her baker friends help him break two people out of the highest security prison in the kingdoms. He threatens everyone they love if they don’t help him and they can’t tell anyone either.

So they all have the juggle multiple responsibilities and keep the planned prison break a secret. While I really liked the visit to the air kingdom and even the tension the prison break plan brought along, I wasn’t a big fan how they got forced into it. As it didn’t feel like they had a choice in the matter. But in the end I did really like how things got resolved. And then at the end when even more truths come to light and things fall on it’s place was awesome. There are also some great twists along the way.

I like how each book has a mystery that gets resolved in that book, but there is also a bigger plot line in the background that progresses. This book has some strong connections with book 4 and 5, where some of the important parts of the bigger plot line in the background got set up. And even with everything going on and the high stakes of the plot lines, these books are just so much fun to read. I love how the author manages to keep the tone fun.

The actual mystery in this book was a tad different, it’s a bit of a cold case when Hank and Imogen discover something and decide to investigate. But throughout the book there isn’t as much investigating as I would’ve expected, but that made sense with everything else going out and after the biggest pieces they needed certain information from someone else, which they get later in the book. Toward the end the truth comes to light and it all falls on it’s place and it’s awesome. I did piece a small part together, but not the rest and it was great to see how it all worked together and connected to the bigger plot line throughout the series too.

I enjoyed seeing how Imogen and her friends handle this newest challenge and how they stick together. The bakers form such a tight group of friends and I enjoy seeing how they have each other’s back. It also was fun to see Maple and Wiley together now in this book. And how Hank and Imogen act now that their relationship is out in the open. And I enjoyed Iggy’s unique brand of humor and snark as well. Iggy played a less big role at first, but toward the end he become more important. I still can’t fully get a grip on Horace and his motivations, some times he seems almost likable and other moments he acts more like the villain again.

I also like how with each book the world gets expanded a bit. This time with seeing more of the air kingdom and also more about magic that we learn. And I like how the series has a good sense of continuity with character from previous books coming back and making another appearance. And plot liens continuing throughout the series. This book had some strong ties with book 5 and multiple characters we met there make a reappearance here.

To summarize: If you like paranormal cozy mysteries I would definitely recommend this series. It’s probably my favorite series in this genre and the series keep going strong. Each book has it’s own mystery, but there’s also a bigger overarching plot line playing out throughout the series. I like the continuity in this series and seeing how things progress throughout the series. Imogen and her baker friends land in some trouble in this book when they’re forced to help Horace with a prison break. They also visit the air kingdom, which made for a fun pace of scenery. Some big secrets and truth come to light at the end, which was great. And with how the book ends I am curious what will happen to the next book.

What’s the last book you read that had airships in them?