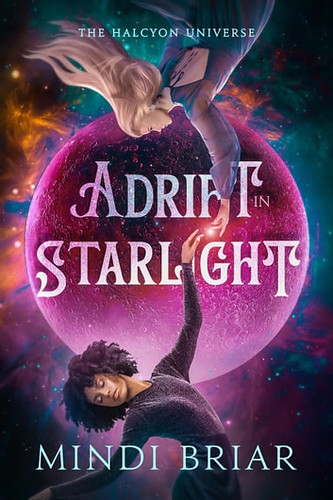 Adrift in Starlight (The Halycon Universe #1)
by Mindi Briar

Blurb:
When set adrift in the universe, some things are worth holding onto.

Titan Valentino has been offered a job they can’t refuse.
Tai, a gender-neutral courtesan, receives a scandalous proposition: seduce an actor’s virgin fiancée. The money is enough to pay off Tai’s crushing medical debt, a tantalizing prospect.

Too bad Aisha Malik isn’t the easy target they expect.
A standoffish historian who hates to be touched, she’s laser-focused on her career, and completely unaware that her marriage has been arranged behind her back. This could be the one instance where Tai’s charm and charisma fail them.

Then an accidental heist throws them together as partners in crime.
Fleeing from the Authorities, they’re dragged into one adventure after another: alien planets, pirate duels, and narrow escapes from the law. As Tai and Aisha open up to each other, deeper feelings kindle between them. But that reward money still hangs over Tai’s head. Telling Aisha the truth could ruin everything…

Their freedom, their career, and their blossoming love all hang in the balance. To save one might mean sacrificing the rest.

I received a free copy from the publisher through Netgalley.

Adrift in Starlight caught my eye when I spotted it on Netgalley. I love scifi romance books and the premise of this one sounded good. I struggled a bit with my device displaying the book in italics, but the story was so good I got used to the italics and kept reading. I thought this book felt fresh and realistic and I enjoyed reading it.

Tai is a courtesan hired to seduce Aisha, the fiancé of their client, but when they meet they quickly grow to like one another and they end up working together on an accidental heist. While that is the set up and how they meet I feel like the story quickly moves beyond that, although Tai keeps it a secret for a while about how they were hired.

I don’t want to give away too much of the plot as I thought it had some interesting twists early on already. The plot of Adrift in Starlight is a bit meandering, but I liked that, it felt very organic with how one set of events led to another. The plot kept my attention and was excited to see what would happen next. I liked how everything got resolved at the end and leaves enough open for a sequel too. I am excited to that there will be more books in this universe.

I liked the main characters in this book and there are some great side characters too, as well as some intentionally not likeable ones. I haven’t read a lot of books about asexual or gender neutral characters, so that was interesting. I liked both Tai and Aisha. There is even more to them than you first realize and I liked how we learn more about them as the story progresses. They both haven’t had the easiest pasts and have their own struggles and I liked how this time away from everything gave them the chance to figure out what they wanted in life. Hue, Jimin and Perry were great side character and there are a few more interesting characters they meet along the way.

I liked the romance. From the way Tai immediately express interests in what Aisha is studying to the way they talked to one another. I liked seeing them spend time together and there are some great scenes where their relationships deepens. I liked how there wasn’t too much drama, but there are some things that upset their starting relationship and I thought they were handled well. Both characters reactions felt realistic, they both have their doubts and other emotions getting in the way sometimes. I liked how there was clear communication between them and even the one secret Tai keeps was handled well and I thought it made sense why Tai didn’t reveal that immediately.

I thought the author did a good job giving me a feel for the world, there are a lot of things we don’t get a lot of details about, but I still felt like I got a feel for what was normal and possible. I especially liked the interesting aliens, there is an interesting alien civilization that Aisha is studying and we learn more about them. Then there are the dragons and how you can only communicate with them when you have a calm mind, which was pretty interesting and the dragons play an important role in this book.

To summarize: I really enjoyed reading this book. The plot and writing style pulled me into the story and I wanted to keep reading and see what happened next. The plot meanders a bit, but I liked that in this book and thought it felt very organic. It kept my attention and I wanted to see what was next for the characters. Both Tai and Aisha are great characters and I thought they felt real, I liked how I kept learning more about them as the story progressed. I thought they made for a great couple and I liked seeing how their romance develops. There isn’t much drama and in my opinion even the secret Tai keeps was handled realistically. The world building feels fresh and there is enough details for me to get a feel for the world. I liked the details like the dragons and an interesting race of aliens we meet. The ending wraps things up well and also leaves room for a sequel. I look forward to more books by this author!