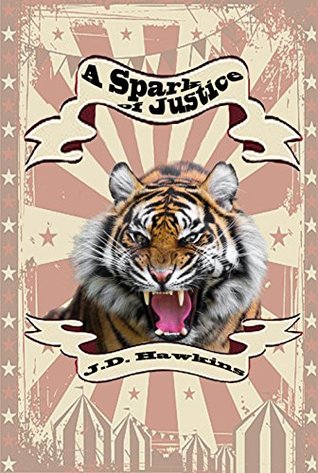 A Spark of Justice
by J.D. Hawkins

Blurb:
A fatal accident at the circus sparks an insurance investigation that leads John Nieves, a former New York cop, to a list of murder suspects. It seems that The Great Rollo, beloved of millions, had enemies… both at the circus and among his own family.

All that is surreal and magical about the circus brings out Nieves’ deepest fears, blinding him to the very real danger that is closer at hand. A bizarre series of revelations and coincidences keep Nieves’ suspicions of the circus people high, even after the actual evidence suggests that the incident really was only an unfortunate accident.

The furtive actions of Rollo’s wife and brother, the beneficiaries of his insurance, lead Nieves into even dirtier family secrets. Apparent attempts on his life from all quarters threaten Nieves, but he refuses to drop the case until the whole truth of who killed The Great Rollo is revealed.

So one of my reading goals for this year was to read more (cozy) mysteries and so far I haven’t been doing well with that goal. So when one day a review request for A Spark of Justice landed in my inbox I decided to give it a try. The circus setting sounded fun and that ended up being one of the aspects I liked most about this book.

A Spark of Justice follows John Nieves who works for an insurance company and he has to figure out a way for the company to not have to pay out the insurance money. So he has to prove it isn’t an accident that the Great Rollo died. There is some mystery surrounding the death of the Great Rollo and what exactly happened, but even at the end I felt like I was still missing a few pieces.

I did enjoy this book and thought the mystery aspect was interesting. The story did kept my attention and I never felt bored while reading as I was invested in learning more about the mystery. The author sets up multiple possible suspects at first and only later we find out who did what and why. Part of the plot lines felt a bit unrelated to the bigger mystery, especially when we found out what really happened. I thought what actually happened was a bit anti climactic and I felt like a few scenes had a bit more potential, some story lines didn’t get wrapped up neatly, I wondered what happened to a few of the characters we met, but once they weren’t in direct contact with John it seemed it didn’t matter what they did.

I did expect some twists and the ending scene I predicted fairly early on, however it was still an enjoyable book. I liked seeing John trying to figure things out and I was curious to what really happened and how everything tied together. we only get pieces at first and then slow things fall on it’s place. I did think a few scenes towards the end got dragged out a bit and then between two chapters a big change happened and I wanted to know how or why that decision was made, but we never learn that. There was also some danger that got played up at times and then played down later, it just felt a bit off.

John was an okay character, but in my opinion the story and setting made this book shine not the characters. The characters did get enough descriptions to feel like they were someone, but there just wasn’t enough to make me really invested or care about them. I think there was room to make John a bit more likeable, but the story driven plot and the third person perspective made it hard for me to really relate to him. I did like how we saw a change in him as a character in his stance towards the circus due to spending time there. We did get a bit of a feel for the suspects, like the crazy cat lady, the wife of Rollo his brother and Rollo his wife and brother make an appearance as well. Then there is the circus cast which just blended into clown and animal caretakers for me, there was an effort to give them identifying characteristics or appearance, but I still had a hard time remembering who was who.

The circus setting was well done and reading that the author was part of a travelling circus himself for a while makes me think that most of it was based in reality. The circus made for an interesting setting and we got a glimpse of their way of life. I thought it was a fun setting for a mystery book.

To summarize: this was a fun cozy mystery set at a circus. I was interested in finding out what really happened and caused the death of the great Rollo. There were a few plot lines that didn’t got tied up neatly and the actual event of what happened was a bit lame in my opinion. I predicted some twists, but I still enjoyed seeing it all play out. There’s also a chapter transition towards the end that was a bit jarring as I wanted to know what happened in between. There is also some danger to John, but that got played up and down depending on the scene. There is quite a big vast of side characters and I had a bit trouble remember who was who. John was a nice enough main character, but with the third person point of view and not enough focus on him as a character I never really felt like I knew him. The focus is more on the story. The circus made for an original setting and I liked learning more about the circus and how the people lived. All in all it was a fun mystery set in an original setting that did keep my attention, but I didn’t really care about the characters, some plot lines didn’t get wrapped up neatly and the truth behind Rollo his death was a bit anti climactic.

What do you look for in a mystery book?

16 responses to “Review: A Spark of Justice by J.D. Hawkins”