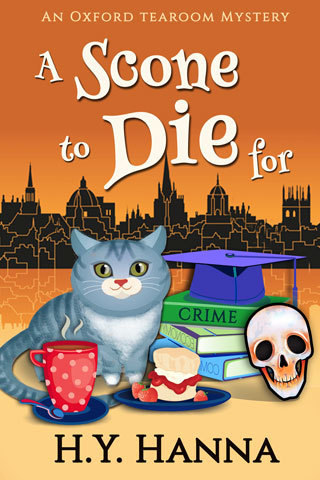 A Scone to Die For (Oxford Tearoom Mysteries #1)
by H.Y. Hanna

Blurb:
When an American tourist is murdered with a scone in Gemma Rose’s quaint Oxfordshire tearoom, she suddenly finds herself apron-deep in a mystery involving long-buried secrets from Oxford’s past.

Armed with her insider knowledge of the University and with the help of four nosy old ladies from the village (not to mention a cheeky little tabby cat named Muesli), Gemma sets out to solve the mystery—all while dealing with her matchmaking mother and the return of her old college love, Devlin O’Connor, now a dashing CID detective.

But with the body count rising and her business going bust, can Gemma find the killer before things turn to custard?

A Scone to Die for caught my attention while I was browsing on netgalley. The cute cover and the interesting blurb made me think this would be a book I enjoyed. I had a lot of fun reading A Scone to Die for and I really enjoyed this book. A Scone to Die For is about main character Gemma who opens her own tearoom and not long after the opening an American tourist get’s killed with one of her scones in his mouth and Gemma get’s entangled in the trying to solve the mystery.

I liked Gemma as a main character and I could relate to her, I am a small business owner as well and Gemma her struggles with her business and conversations with her mom felt very realistic. I thought Gemma was a nice and likeable person, she was smart enough to stay out of trouble and handled things well. Although it did bother me a bit when later in the book she let her feelings of jealousy get in the way of things and she even wrongly accuses her ex of something.

The side characters all play a role too. We get a bit of a feel for most characters, but not all of them play as a big a role. I like did like how many of the characters had some kind of quirk, like the group of old ladies who gossiped a lot and wanted in the investigation as well, Gemma her best friend who liked to draw, Fletcher who works in the kitchen but can’t interact as well with people. They all had something unique to make it easy to remember them by even though we don’t learn as much about each of them, those characteristics did make them recognizable.

There is a bit of romance, two potential love interest that get hinted at and there are scenes involving Gemma and her interactions with the men. But as with most cozy mysteries it doesn’t really take center stage. It was mostly a set-up of potential love interest in this book and hints to what might get more in the next book. I didn’t really feel the romance yet, but that might change. I was curious what kind of past Gemma and her ex have and why they separated now that they meet again, but we don’t hear as much about their past as I hoped.

I liked how this book was set in the UK, I mostly have read cozy mysteries set in the US and the small cozy village close to Oxford made for a great setting. I also liked how the author shared a bit about life at college and such in Oxford. I could imagine how everything looked like well. The tearoom made for a fun setting and job. I always like it when there is a connection with food like that in a book. Oh and Muesli the cat was adorable, although I wish she played a bigger part, but I do think we’ll see more of her in the next book.

To summarize: I really enjoyed this book! Its a fun and enjoyable cozy mystery with an intriguing mystery that kept me guessing till the end. The mystery was handled well and it felt realistic how Gemma got involved and how the policy handled things. I liked main character Gemma and could relate to her as I have my own business too. Gemma was a likeable character, although her jealousy and accusations when it came to her ex did bother me a bit. There is a hint of romance and two potential love interest, but not much more yet in this book. I liked the small town UK setting and the tearoom and the quirky characters. All in all this was a great cozy mystery and I am looking forward to the rest of the books in this series.

What’s the last book you read that took place in the UK?