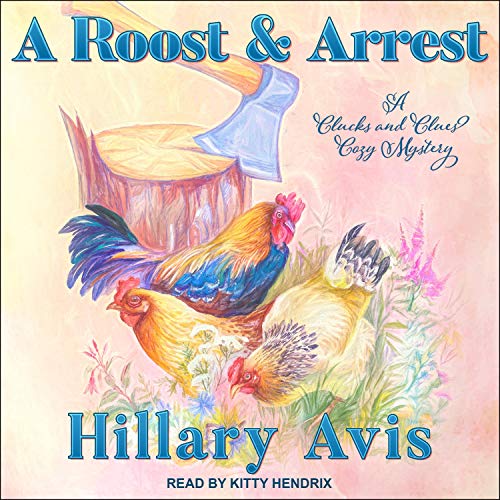 Leona’s spirits are flying as high as the flags over Honeytree’s Fourth of July Festival. Her fledgling egg business is booming, her new relationship is flourishing, and it’s finally warm enough to put the top down on her convertible. Everything is sunny-side up.

But her good mood disappears faster than a speeding pullet when the local beauty queen is shot during the fireworks finale—and the murder is pinned on one of her close friends.

Now Leona must work around the cluck to find the real killer before her friend is cooped up permanently in the state pen.

A Roost and Arrest, the third book in the Clucks and Clues Cozy Mysteries, is a cock-a-doodle who-dunnit that will keep you giggling and guessing until the end.

No gore or other explicit content, just good, clean murder.

I received a free audio copy from Tanto Audio and voluntarily reviewed it.

This is such a fun cozy mystery series. I like the chicken farm theme and Leona makes for a great main character. And these are great in audio too, I like the narrator and how she does everyone’s voices. This was another great listen.

In this book the 4th of July celebrating ends with a bang when the local beauty queen is found dead in the car of one of Leona’s friends. Leona knows her friend couldn’t have done this and gets involved to figure out who did. The beauty contest theme didn’t really appeal to me and I felt like this mystery was a bit less good than the ones in previous books, but despite that it was still a great read and I was still hooked and wanted to keep reading.

There weren’t as many suspects in this case, but plenty of questions. And for a long time I wasn’t sure who had done it as none of the suspects seemed right, but I couldn’t figure out why. Once I had some time after a big clue at the end to think about the mystery I managed to figure out the suspect just before Leona did and it was a nice twist. I like how this author writes the mysteries and how there is plenty of progression and finding clues along the way. There also are some other plot lines going on besides the mystery, but it was nicely intertwined and fun how Leona found some clues even while focusing on other aspects of her life.

I liked reading about how Leona’s egg farm is doing, just like in the previous books there is a sub plot line about her farm. She runs into a weird issue with her chickens here, another mystery, that she has to solve. And it’s just fun reading about her chickens and it’s clear how much Leona loves her chickens and farm. Leona also has to take care of her friend’s kids a few times in this book. I have to say I am not always a fan of kids in books and there was a bit too much attention on them at times, but there were some fun scenes too with the unique outlook kids can have.

It also was fun to see some by now familiar side characters again like Ruth and even Jillian who works in the café. And Leona’s relationship with Eli slowly continues. It’s fun to see them being neighbors and how they interact.

The narrator again did a great job with this one. I like her voice for this series and her Leona voice is so spot on.

To summarize: I really like this series, it’s an awesome cozy mystery series. I like the mysteries and figuring out what’s going on as well as the look in Leona’s life and reading about her chickens ofcourse. This mystery didn’t have as many suspects and while it wasn’t as gripping as the first two mysteries it still kept me reading and wondering what really had happened. While I didn’t really care about the beauty contest theme, I still found found myself engrossed in the story and wanting to know what happened and I figured out the culprit only shorty before the main character did. I liked the side plot lines about Leona’s life, a small mystery surrounding her chickens and her slowly progressing relationship with Eli. I like the narrator for this series and enjoyed listening to this one!

2 responses to “Review: A Roost and Arrest by Hillary Avis”