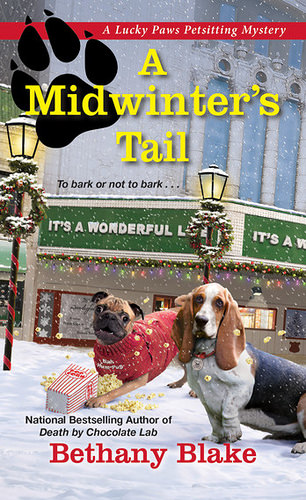 Professional pet sitter Daphne Templeton loves the holidays in Sylvan Creek, Pennsylvania. And nothing gets her into the spirit more than the town’s annual Bark the Halls Ball. The whole community will be there to wag their tails, especially this year’s special guest–Celeste “CeeCee” French, founder of a national chain of pet care franchises, who’s returning home to announce plans for a bright new flagship store.

But not everyone’s celebrating CeeCee’s homecoming. Daphne’s friend Moxie Bloom, owner of Spa and Paw, a unique salon for people and their pets, has plenty to growl about. So when CeeCee is found face down under Sylvan Creek’s town Christmas tree, stabbed with a distinctive pair of professional-grade pet shears, suspicion lands squarely on Moxie. Despite Daphne’s promises to Detective Jonathan Black, she quickly reprises her role as amateur sleuth. Ably assisted by her basset hound sidekick, Socrates, she must hurry to prove her friend’s innocence before a killer barks again . . .

I love this cozy mystery series and this book again reminded me why this is one of my favorite cozy mystery series. A Midwinter’s Tail was again a great read, with lots of story, a touch of romance, a great mystery and an awesome cats of both human and animal characters. I really had a great time reading this book and had fun trying to solve the mystery alongside Daphne and spend some time in Sylvan Creek again around Christmas time.

The mystery in this one was a great one. It kept me guessing for a long time. Around the halfway mark I took a moment to guess who I thought was the murderer and for a long time I thought I might be right. But eventually it turned out I was wrong, but another character I suspected was the murderer. The book is full with clues and hints, but it takes a while for everything to fall on it’s place and make sense. The actual murderer did make sense, although I wouldn’t have minded a few more hints in that direction as my guess for that person was mostly based on a short sentence that stuck with me somehow.

I really enjoy following Daphne, Socrates and her friends as she solves another mystery. This book introduces two new animal side characters that are an important part of the story, Tiny Tim and Snowdrop. And a whole bunch of new side characters, most of which are potential suspects. I like Daphne’s character and the way she gets involved in these mysteries and helps to solve them. I like how her snooping is well done and not too forced or awkward. She’s fun to read about.

There is also a great cast of side characters among which Moxie, Piper, Daphne’s mom and Jonathan Black. I also love how the animals play a role in the story and how each animal has their own personality as much as the human characters. There’s also an interesting development with a character who returns to Sylvan Creek and who was Moxie’s boyfriend in high school.

The romance also continues a bit in this book and I was quite excited to see how it developed. Daphne is still meeting with Gabriel, but I never had the feeling it was very serious. Nevertheless that part of the plot was handled well. I really liked her scenes with Jonathan Black and I am quite excited to see how the next book will continue that plot line with what happened in this book.

To summarize: I was delighted to return to Sylvan Creek during Christmas time and follow Daphne as she solves another mystery. I really enjoy this awesome cozy mystery series and it’s one of my favorite cozy mystery series. I love how the animal characters have as much personality as the human ones and even with a big cast of characters I hardly ever have trouble remembering who is who. This book is full of recurring characters and a whole bunch of new ones too. The mystery was a great one, with lots of clues and hints, but it took some time for it all to fall on it’s place. I guessed the murderer wrong, but I did suspect the actual murderer too. And it only all falls om it’s place toward the end, which was great, although I wouldn’t have minded a few more hints in that direction. I also liked seeing how the romance developed in this book. All in all another great read and I can’t wait for the next book.

What is one of your favorite pet characters from a book?

6 responses to “Review: A Midwinter’s Tail by Bethany Blake”