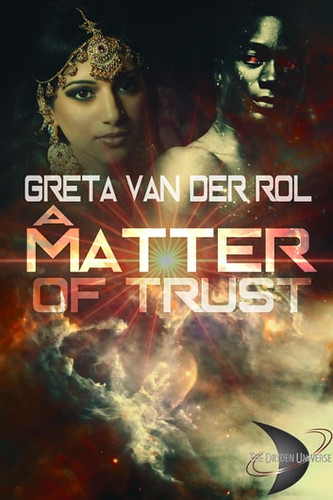 Blurb:
Princess Amira is ready to start a new life after the death of her husband, but that doesn’t include marrying the man her father picks out for her. Pursued by his agents, she races across the galaxy in a desperate search for a safe haven. Amid simmering tensions at the edge of the Empire, Amira renews her acquaintance with Imperial Admiral Ul-Mellor. Although his detractors call him the Demon Admiral, Amira finds him intelligent, articulate, and very attractive.

But Ul-Mellor is not human and Amira is a princess – far above Ul-Mellor’s status on his home world. He and Amira will have to overcome a gulf of cultural and class differences if they’re to turn their mutual attraction into a relationship. And what will Ul-Mellor do when faced with a choice – Amira or his hard-won commission?

After I read The Thunder Egg in Pets in Space 6 I knew I wanted to read more books by this author. So I bought a box set with three stories set in her Dryden Universe, the same setting as The Thunder Egg. When I was in the mood for a fast paced scifi book I knew what to read and started on the first story.

A Matter of trust is mostly told from the point of view of Amira, she’s a princess, but for her the title doesn’t mean a lot. I liked how she’s kind to the alien species on the planet and how she’s interested in other species cultures. When her father tries to arrange her marriage with the ruler of another planet she makes a run for it instead. Unfortunately the ruler wants his new wife and doesn’t give up so easily. What follows is a fast paced exciting story as Amira tries to stay out of his hands. She encounters friendly aliens, smugglers, the family of her dead husband and a love interest.

This was exactly the type of read I was in the mood for, the plot moved quickly, but didn’t feel rushed. There’s a lot happening and not a dull moment. Although I did feel at times some of the more important scenes lacked impact, there isn’t really a moment to stand still and feel the impact. I also wished there had been a bit more build for the romance and I would’ve liked an epilogue to see how everything got resolved (although there are enough hints you can fill in that part yourself).

The romance starts a bit later in the book and a lot of the initial build up happens before the book starts, but I thought that worked here. When Amira and Ul-Mellor meet again they finally have the chance to see if their initial spark can lead to more. I liked both characters and seeing how they interacted. I would’ve liked to see a bit of them together and see them spend time together, but even with how quick it developed their connection was clear and I could see why they liked the other.

To summarize: I am glad I picked up this book. A Matter of trust follows Amira as she tries to escape marriage to the man her father picked for her. It was fast paced with not a dull moment. I did feel a few scenes lacked a bit of the impact as the plot moves on so fast. I liked Amira, how she was kind to all species and how she wanted to forge her own path. The romance develops quickly as their initial connection was forged in the past. I liked them together. I would’ve liked to see more of them or an epilogue. I really enjoyed this book and will definitely be reading more by this author!

2 responses to “Review: A Matter of Trust by Greta Van Der Rol”