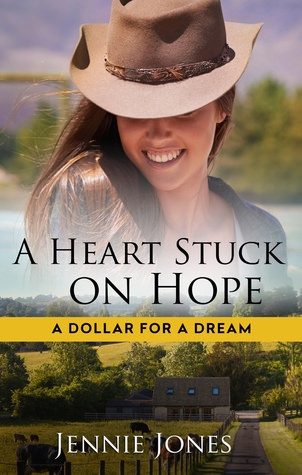 Blurb:
Move to the country for $1 a week.

Dulili is suffering a people drought. Over the years more people have moved away than have arrived to stay in this old New South Wales farming town, and now only a handful of young families and elderly residents are left. The locals put a plan into action to entice newcomers: offering the town’s empty houses to newcomers from anywhere in Australia. Who could resist renting a beautiful homestead for a dollar a week?

There’s nothing left for Adele Devereux in Sydney: no job, no relationship, no hope, and no diagnosis for her shy, uncommunicative daughter Ali. So she packs her bags, takes her meagre savings, and moves her small family to the country. She never expects to meet Tom Wade, a man facing his own hopeless situation, but whose kindness reaches her daughter in an unexpected friendship. As the small town of Dulili attempts to regenerate itself, Adele finds herself drawn further in to the community – and into her attraction to Tom.
Tom is not back in Dulili to build a relationship. He’s there to heal wounds, help his grandmother, and make new plans. Plans that don’t come with his grandmother’s new tenant, part of the Dulili dollar scheme. But as Adele and Ali effortlessly work their way into his thoughts and his heart, he realises that there are two crucial elements that he left out of his long-term plans – the chance to find love and renewed hope for the future.

I loved the concept for this series, rent a house for one dollar to revive a small town and the chance to restart your life. Too bad this book fell a bit flat for me. And even after thinking about it for a while I just can’t put my finger on the why. Why didn’t I fully enjoy this book? To be honest I have no idea, I can only say that it just didn’t fully grab my attention, didn’t engage me as much and I didn’t care as much about the story and characters as I hoped.

Having said that there is a lot to like about this book. It’s about healing, starting over again, friends, losing and gaining, fighting for what you want, hope, dealing with life’s adversities and so much more. It’s has some great messages and themes. There’s little Ali, who doesn’t speak to anyone besides her mom and no one knows why. There’s Adele and Tom and even Tom’s grandmother who all have been through so much and finally have a chance at a better life. And the title fits the book so perfectly, it’s about Adele and how she keeps hoping. The word hope is mentioned quite a few times and I loved that hint back to the title.

But for everything that I should’ve loved and make me enjoy this book I felt myself reading it and just thinking it was okay. There was something preventing me from fully getting into the story. I wanted more about the town, I had trouble visualizing it. I don’t know a lot about Australia or seen a lot of pictures so I couldn’t form a good image and there are no descriptions. I loved the small town that was rebuilding itself, but I just didn’t fully feel it. I hope that will improve with the later books.

I already mentioned the characters a bit before, they all have been gone through a lot and this book is partly about their healing process. Something on Tom his job went badly and now he’s losing a lot and not sure how to deal with it. I understood her was in a difficult position, but I didn’t really feel it. And why was he so stuck going away, going back? Adele sees this as her chance to start over and hopefully find out why Ali stopped talking. Again she seemed nice enough, but I didn’t really care about her or feel her worries. There was only the hope and a bit of a sad acceptance of everything that happened around her. I did like how she helped the town and came with some new ideas.

Then there is Ali, who was probably my favourite character in the book. She only talks to her mom, but to no one else. Nobody knows why. She doesn’t seem sad and her mom can’t think of anything that happened. Then Tom comes into their lives and slowly he begins to form a bond with Ali, I really liked that part and seeing the tiny breakthroughs, Seeing her open up to Tom and eventually we do find out what happened and why she stopped talking. On the one hand I thought it was a bit anti climatic, but on the other hand it also made perfectly sense and showed a bit of how a child’s mind can work and deal with things. So yes that is the part I really liked about this book.

There is a bit of romance between Tom and Adele. We do get a feel for them as characters and are told what they went through I never really felt it and that’s my problem with the romance too. It just was, but i didn’t really feel it and I didn’t feel their emotions and frankly didn’t really care if they got together or not. There is no chemistry or emotions or talk. There was a bad case of not communicating and maybe that’s also why I didn’t really feel the romance. They only talk about Ali or about small stuff, but not really about the things that matter like how they feel or their relationship or what’s next. There are some sweet and nice scenes and I did like how the book ended.

To summarize: This is a nice start of this series. I loved the concept, but the book fell a bit flat. It wasn’t fully able to capture my attention and while it was pretty short it still took me a while to read. I couldn’t visualize the town well and I would’ve liked a few more descriptions. The characters are nice enough, but again I just wasn’t able to fully care about them. I did like Ali and her plot line and the slowly figuring out why she had stopped talking. Her interactions with Tom were great. There also was a bit of romance, but I didn’t really feel it or their emotions. It just was. I was a bit annoyed they didn’t communicated. All in all it was a nice start, but it just fell a bit flat for me.

How important is it for you to like the characters or feel their emotions in a book?

12 responses to “Review: A Heart Stuck On Hope by Jennie Jones”