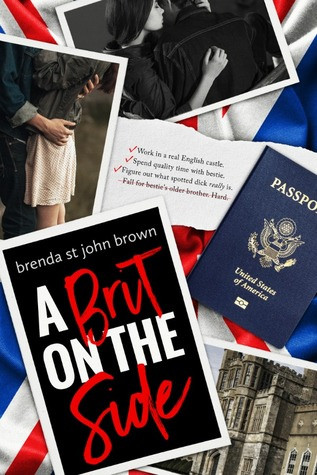 A Brit on the Side (Calder Castle #1)
by Brenda St. John Brown

This was such a fun and romantic read. Bea has just broken up with her ex-fiancé and she just wants to get away from it for a bit, so she gets to stay the summer in the UK at the castle her best fiend Scarlett her parents own. What she didn’t count on was that Scarlett her brother Jasper would be there too. They shared a hot hook-up years ago that Bea never told her best friend about. I really enjoyed this book, it was a great read.

This is mainly a romance book, but there’s so much more to it as well. From the setting in the UK castle hotel to the topic of friends, body image issues, standing up for yourself and more. I love the setting in the UK and at the castle, it just added something fun to the story and I have a weak spot for books set at a hotel. Not sure why, but it works for me. I liked seeing Bea deal with this new environment and there are some fun mentions about differences between the US and the UK. I also liked how she worked at the hotel and found her place there.

There was a part at the end of the book were I would’ve liked a certain topic to be expanded a bit more, it didn’t feel rushed, but it feels like we sorta skip over a part and it just felt a bit off. Also I am really curious who the other books in this series will be about, my guess is Claire and Scarlett will each get their book?

Bea is a fun main character. I really liked how she dealt with things. She didn’t always make the best decisions and jumped to conclusions or made mistakes sometimes, but she felt real. And she really shows her personality. With her persistence to learning to work in the kitchen, to her relationship with jasper to how she handles the situation in London. I really liked how she handled the London situation (not giving more details because spoilers), she really stood up for herself and I think she handled things well. When I first realized she was counting calories I was afraid I wouldn’t like where this was going as I don’t like reading about people who are dieting. But in the end I really liked how the author handled the topic. I also liked seeing the little changes in Bea over the course of the book, it felt very realistic. And she never changed instantly, it was all slow going and felt real.

There’s also a rich cast of side characters. I think Lou might have been my favorite, she’s great in the kitchen and also teaches Bea a lot of things, not all of them cooking related. And Claire is great too, she was a good friend to both Bea and Scarlett. I never fully warmed up to Scarlett however. Not sure why, but I just never fully liked her. But maybe that’s because we only see Bea her point of view and never get into Scarlett her head. I also liked how Bea her ex was handled and how Bea didn’t hate him, but just knew they weren’t right for each other. I thought it was dealt with very maturely and I liked that.

The romance was really well done. It’s awkward and real and while you might think they would pick up from where they left of that weekend, they don’t. They have some issues to work through and it’s actually quite the slow building romance. I just would’ve liked more, but that can also be because I really liked these two together. I liked how Jasper really cared about Bea and made her feel confident and beautiful. I also liked how Bea and Jasper both have their flaws and at the start have some trouble knowing how to deal with the situation, but I liked how they worked things out. There are also some pretty hot scenes, which were well written. There’s very little drama and what drama there was was dealt with realistically.

To summarize: This was a great romance book! From the setting in a hotel to the romance to the side characters and the plot lines it deals with. I felt there was a good balance between the different topics in this book. I also really liked how the author dealt with the topic of Bea her dieting/ body image as it’s normally something I don’t like reading about. Bea is a great main character and I liked how real she was and how we really see her personality with how she deals with things. I liked seeing her adapt to the new environment and working in the castle. The romance is surprisingly slow building as these two have to work through some things first. I liked seeing them fall for each other, there are some very sweet and some hot scenes. I liked their romance. This book also felt realistically with how changes go slowly and how people reacted and dealt with things, I liked that. Overall this was a great read and I am already looking forward to the other books in this series.

Tell me about the last book set in the UK or in a hotel that you read about?

16 responses to “Review: A Brit on the Side by Brenda St. John Brown”