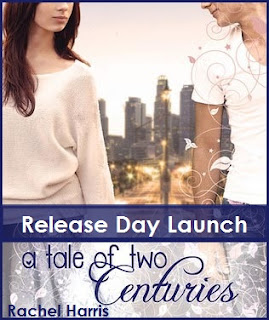 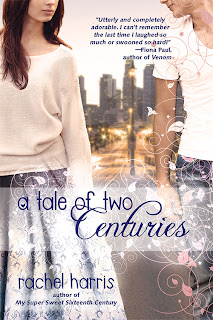 Blurb:
Alessandra D’Angeli is in need of an adventure. Tired of her sixteenth-century life in Italy and homesick for her time-traveling cousin, Cat, who visited her for a magical week and dazzled her with tales of the future, Alessandra is lost. Until the stars hear her plea.

One mystical spell later, Alessandra appears on Cat’s Beverly Hills doorstep five hundred years in the future. Surrounded by confusing gadgets, scary transportation, and scandalous clothing, Less is hesitant to live the life of a twenty-first century teen…until she meets the infuriating—and infuriatingly handsome—surfer Austin Michaels. Austin challenges everything she believes in…and introduces her to a world filled with possibility.

Rachel has an amazing opportunity for readers right now as well. If they forward their receipt from their purchase of A TALE OF TWO CITIES during release week to rachelharris1@gmail.com, they will be sent an exclusive Austin trading card, a ticket to Less’s play and a signed bookplate. Take note that the purchase must happen during release week.

Excerpt:
Without stopping or even slowing his stride, he grabs a map from a vendor and flips it open. “So Lethal Xperience is at the back of the park. We’ll hit that first and then make our way up to the front.”
He seems unaware that the length of his legs far exceeds my own. As I frantically attempt to match his stride, I must pant or wheeze because he finally looks down at me, no doubt pink-faced and wide-eyed both from the sensory overload surrounding us and my huffing at a near jog to stay beside him. He grins. “Try to keep up, Short Stuff.”
I grit my teeth with determination and somehow keep myself from muttering, Yes, Master. But the thought still makes me smile. Cat must be rubbing off.
We pass a circular ride filled with fake horses going up and down. Giggling and drooling children clap their adorable hands from their belted saddles while a spirited tune blares overhead. Just past that is a miniature roller coaster made to look like a giant, happy centipede. The child in the front seat waves to his mother as the cart dips, and his squeal of joy tails behind him. It’s too bad that not all roller coasters can be five feet tall.
Then I get a wicked idea.
Austin believes I am a child, naive and boring, and, it would seem, without any humor. This second challenge is supposed to be about fun, and nothing—not even the lead role in a prestigious play with a crowd of a thousand—will give me more joy than turning the tables on him, even if only for a moment.
Looking back at the children’s ride, I grab Austin’s elbow and say innocently, “Is this not the roller coaster you are looking for?”
He stops rather abruptly and peers at me through squinted eyes. “You know, it’s like you look normal…” He trails off and shakes his head. He points a long tan finger at the centipede ride and in a tone dripping with condescension explains, “Less, Arthropod Picnic is a kiddie ride. It’s made for pint-size ankle-biters ages three and under.”
I try my best to look disappointed. I do everything I can to contain my mounting delight. But after no more than a few brief moments, I let forth a victorious giggle.
Realization dawns on his face. “You think you’re funny, huh?”
When I nod, he chuckles. He leans back on his heels and lets his gaze travel over my body. Humor dissipates as my skin prickles to life. On Austin’s slow ascent back up, he pauses to look me in the eye and an emotion crosses his face. It’s so fleeting—gone and there in an instant—that I cannot catch it.
“So, you think you’re ready to play at the big girl table now.” The left side of his mouth kicks up in a grin. “We’ll just have to see about that.”
The apparent taunt and Austin’s added wink spur me on.
This is my chance to prove to him that I’m not the timid girl I once was. To prove to myself that I’m no longer the child of my youth but a woman ready for the future.
I sashay toward a person dressed as a shiny nugget of gold posing for pictures with children, feeling Austin watching me, his gaze on my every step like a physical touch. My legs feel wobbly under my skirt, but an energizing spark ignites in my blood. I glance over my shoulder, confirming I have his complete attention, and then with an outward shrug (and an inner dance), I reply with every ounce of confidence I can muster, “Yes. We will.”
Austin’s smile widens. The sounds and patrons of the park fade away, and it is as if we are the only two around. I don’t know what is happening…I scarcely even recognize myself in this moment. Being with Austin does that. It turns me into someone else.
And I like who I become.
I watch his slow saunter, my body poised with tension. I don’t know what is going to happen next, but I wouldn’t trade the delicious expectation for anything. Austin doesn’t stop until he is right in front of me, close enough that I have to look up to meet his demanding blue gaze, and so close that warmth fans across my face as he says in a low voice, “Careful, girl. You’re playing with fire.”
“I’ve been careful my whole life,” I tell him, surprising myself with the resentment ringing in my tone. But it’s the truth. “And you know, I think it’s about time for me to be a little…” I bite the corner of my bottom lip, searching for exactly the right word to describe the emotions and thoughts that have surfaced the last few days. When I find it, I smile and wiggle my eyebrows suggestively “Wild.”
Austin sucks in a breath. He searches my eyes and I boldly stare back, praying that he cannot see my knees shaking. Then, obviously concluding that I meant every word, he flashes his devilish grin. “I can work with that.”

About the author:
Rachel Harris grew up in New Orleans, where she watched soap operas with her grandmother and stayed up late sneak reading her mama’s favorite romance novels. Now a Cajun cowgirl living in Houston, she still stays up way too late reading her favorite romances, only now, she can do so openly. She firmly believes life’s problems can be solved with a hot, powdered-sugar-coated beignet or a thick slice of king cake, and that screaming at strangers for cheap, plastic beads is acceptable behavior in certain situations.

When not typing furiously or flipping pages in an enthralling romance, she homeschools her two beautiful girls and watches reality television with her amazing husband. Taste The Heat is her adult romance debut. She’s the author of MY SUPER SWEET SIXTEENTH CENTURY and A TALE OF TWO CENTURIES. She loves hearing from readers! Find her at www.RachelHarrisWrites.com.

And there is a giveaway! For a chance to win, enter the rafflecopter below:
a Rafflecopter giveaway

One response to “Release day post: A Tale of Two Centuries (My Super Sweet Sixteenth Century #2) by Rachel Harris”