This month’s Read Play Blog is a day early as every Sunday I have the sunday posts and didn’t want to have both posts on the same day.
I was happy when I found out this month’s question as it ties in perfectly with sci-fi month!

Question: What is your favourite sci-fi game?

This month’s question was an easy one. Because while I thought I didn’t like reading sci-fi books at first I did play some sci-fi games when I was young already. And my favourite sci-fi game is the Ratchet and Clank series. 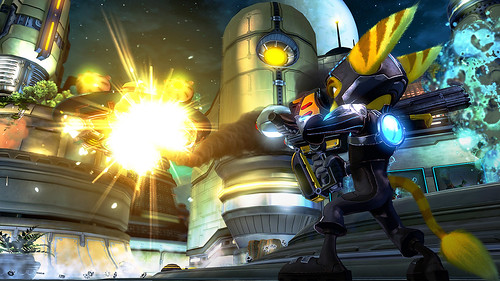 So were is Ratchet and Clank about? To quote wikipedia:

The games take place in a science fiction setting and follow the adventures of Ratchet (an animalistic human-like character known as a Lombax, who is a mechanic) and Clank (a diminutive, sentient robot) as they travel through the universe, saving it from evil forces on a regular basis. The series is noted for its inclusion of many exotic, unique and over-the-top weapons and gadgets, a concept that Insomniac Games has also expanded into their other games.

I think that explanation is pretty spot on. I always liked Ratchet a tiny bit more the Clank, but what I liked most about the game is the gameplay and the weapons and gadgets. The Ratchet and Clank games feature an amazing variety of fun weapons. I remember a weapon from one of the earlier games that turned the enemies into sheeps. Beside that there are also weapons that give big explosions or fun visual effects. Or a lightning whip with a large reach, bombs, guns etc, there’s a varity of weird weapons. In later games the weapons even upgrade and change colour or get even cooler effects when they are upgraded, which is fun to see and it makes it worthwhile to fight with all the available weaposn just to see how they upgrade.
Ratchet and Clank is the perfect game when you want to run around and blast hordes of enemies into oblivion. The story might be a bit weak, but the gameplay more then makes up for it. And the visual aspect is pretty good too. The different planets all look different and are fun to see and explore. Especially later games in the series have good visual effects.

I have played the first 3 Ratchet and Clank games for the playstation 2 and am now making my way through the playstation 3 games. I already have finished Tools of Destruction and Quest for Booty and am now playing A Crack In Time. Actually I haven’t played the game in a long while, but I plan on continuing eventually. 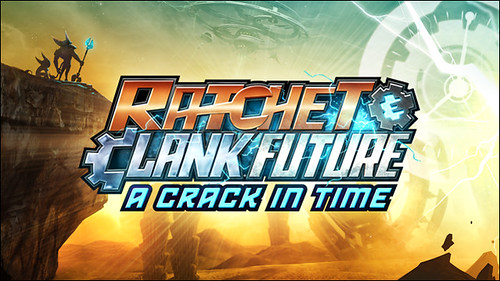 I would like to recommend Ratchet and Clank: A Crack in Time. Beside the time travel element, this is my favourite Ratchet and Clank game so far. The graphics are improved, the world even more fun to explore and they have a new arsenal of weapons mixed in with some old favourites. I also really like the way you can travel through space in this game. You don’t just click on the planets name and poof there goes your spaceship, you can actually fly around space and do other missions in space or just go to the next planet. I am currently still playing this game. 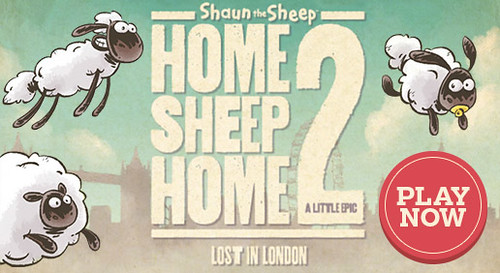 I am currently playing Home Sheep Home 2 on the computer through steam. It’s a fun, but also frustrating puzzle game, that features the sheeps from the Shaun the Sheep tv series. The characters are Shirley who is fat and slow, but who sinks in water and can’t drown; Timmy, the baby sheep, who’s small and can fit through small spaces; and Shaun who’s the fastest and jumps the farthest of them all. You have to collect items and make sure that all sheep make it to the end of the level. And it has such cutesy artwork.

What is your favourite sci-fi game? And have you ever played any of the Ratchet and Clank games?