I Promise You (Barrett Boys #6) by Jordan Ford My Rating: 4 stars Genre: Contemporary Romance Age Category: Young Adult Type of romance: MF Blurb: Jackson promised to take his best friend to prom, no matter what. But four years down the track and things between them have shifted. Can childhood besties become something more, or will it ruin everything? Jackson: Lesson #1: When you’re twelve and you make a deal with your best friend that you’ll go to prom together, don’t do anything to screw that up, even if she does try to seal the deal with a kiss. […]

Unexpected Demands (Hidden Wolves #2) by Kaje Harper My Rating: 4 stars Genre: Urban Fantasy/ Paranormal Romance Age Category: Adult Type of romance: MM Blurb: He’d rather fight enemy wolves and rogue humans than face his own heart. When Aaron took down a violent, power-crazed wolf and inherited half a pack, he knew being Alpha wasn’t going to be easy. A week later, he’s finding out what an understatement that was. Other werewolves are calling for the extermination of his pack’s gay wolf, or for Aaron’s own death, and the risk of exposure to humans is growing. Aaron can’t afford […]

Salted Caramel Sorcery (Bewitched by Chocolate #7) by H.Y. Hanna My Rating: 4 stars Genre: Paranormal Cozy Mystery Age Category: Adult Type of romance: MF Blurb: The autumn equinox is here, and Caitlyn Le Fey is excited by the upcoming masquerade ball to celebrate the festival of Mabon. Not only is it a chance to dress up in glamorous costumes, but—with the Widow Mags catering—the villagers might finally put their prejudices aside and appreciate the delicious treats from her grandmother’s chocolate shop. What’s more, with the dreamy music and romantic dancing, Caitlyn might even get her first kiss with the […] 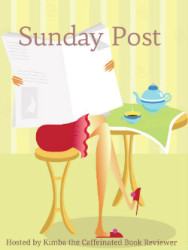 The Sunday Post is a weekly meme hosted by Kimba @ Caffeinated Book Reviewer. It’s a chance to share News. A post to recap the past week, showcase books and things we have received and share news about what is coming up for the week on our blog. What happened this week? This week was so tiring. My boyfriend started his new job last Monday and we had to change our entire schedule and move our sleep schedule as well. This was tough, I hate changes and always struggle to deal with it, so that was quite the struggle. And […]

Lola’s Kitchen is a feature on Lola’s Reviews where I talk about all things related to food, cooking and baking. These usually are recipe posts or more discussion type posts about food. I love cooking and spend some time in the kitchen almost every day, so I wanted to give it a place on my blog as well. The banner for this feature is designed by Michelle from Limabean Designs. After trying a vegan pancakes recipe recently I wondered if I could use that and my kaiserschmarrn recipe to make a vegan kaiserschmarrn recipe. After some experimenting I figured out […]

Counted Corpse (Stitches In Crime #4) by A.C.F. Bookens My Rating: 4 stars Genre: Cozy Mystery Age Category: Adult Type of romance: MF Blurb: The truth shall set her free, but not if someone wants her dead first. Business has been good for historian Paisley Sutton, but when she goes into her own church parish house to salvage some of the early 20th century fixtures before the building is demolished, she uncovers far more than vintage cabinets. Once the women from church hear about the secrets Paisley is uncovering, they are bound and determined to reveal the truth and unmask […]

The Sunday Post is a weekly meme hosted by Kimba @ Caffeinated Book Reviewer. It’s a chance to share News. A post to recap the past week, showcase books and things we have received and share news about what is coming up for the week on our blog. What happened this week? This was such a full week, a lot happened. So last week I told you all that my boyfriend had a new job, well he actually ended up getting another job and decided to go for this one instead as he thinks he will like this job more. […]