J. Taylor Publishing are giving away FIVE ARCs of Darkest Day by Emi Gayle! And bloggers like me got to share the giveaway on our blog. The Darkest Day is the last book in the 19th Year series by Emi Gayle. 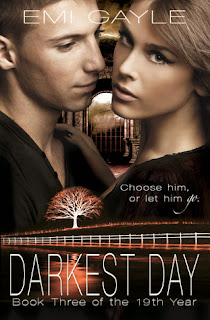 
Blurb:
Mac Thorne’s time as a Changeling is coming to an end.

There’s just one last step. She must say goodbye to her human. Forever.
After being challenged in every way possible, Mac leaves what she thought would be the easiest task for the last possible moment. As midnight on July fourth draws near, though, she hasn’t found a way to give up Winn Thomas.

Emi Gayle just wants to be young again. She lives vicariously through her youthful characters, while simultaneously acting as chief-Mom to her teenaged son and searching for a way to keep her two daughters from ever reaching the dreaded teen years.
Ironically, those years were some of Emi’s favorite times. She met the man of her dreams at 14, was engaged to him at 19, married him at 20 and she’s still in love with him to this day. She’ll never forget what it was like to fall in love at such a young age — emotions she wants everyone to feel.

DARKEST DAY is the third installment in the 19th Year Trilogy, featuring Changeling Mac Thorne and her hot-geeky boyfriend Winn Thomas. And J. Taylor Publishing is giving away FIVE ARC copies.
To YOU!
You don’t even have to be a book blogger!
Nope, so long as you are willing to leave an honest review between the dates December 23rd 2013 – January 6th 2014, you are eligible to enter.
Interested?
Then just fill out the form and keep your fingers crossed.