I am part of the cover reveal for Stars in her Eyes (Sparkstone #1) by Clare Marshall. So without further delay, here is the cover: 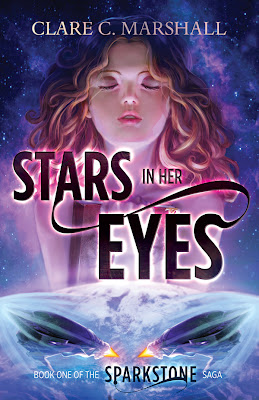 I reall like the cover. I like the combination of colours and it looks mysterious and quite different from most other covers I have seen. I also think it’s really nice done how the earth is on the front and the girl behind it all. I also like the font of the title and how the A of stars is connected with the S of eyes.

Dream your own death.

Welcome to Sparkstone University, where some students are more gifted than others.

When Ingrid learns she’s been accepted at the hyper-secretive Sparkstone University, she is sceptical. It’s an honour to attend, apparently, and yet barely anyone has ever heard of the place.

And everyone seems a little too happy that she’s there: especially when she meets Sunni and her group of friends. They seem to already know Ingrid. As if she was expected. Expected to save Earth from an imminent alien invasion. Like she has superpowers or something.

As if magic and mutations exist. As if aliens are really planning to attack.
That just sounds ridiculous. There’s no such thing.

I think the blurb sounds really awesome too. Okay maybe the idea of a school for gifted students isn’t that original. but a school of gifted humens where people already know the main characters and she has to save earth from an alien invasion, now that does sounds original. I also like how the blurb starts with some examples of what some of the kids powers are. And how the University is surrounded by secrecy and the main character actually is sceptical. This book sounds really interesting! 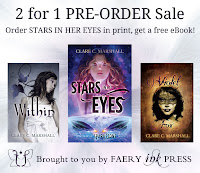 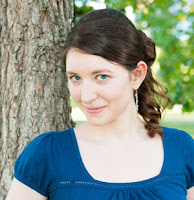 Clare C. Marshall grew up in rural Nova Scotia with very little television and dial up internet, and yet, she turned out okay. She has a combined honours degree in journalism and psychology from the University of King’s College, and is a graduate from Humber College’s Creative Book Publishing Program. She is a full time freelance editor, book designer, web manager, and publishing consultant. She enjoys publishing books through her imprint, Faery Ink Press. When she’s not writing, she enjoys playing the fiddle and making silly noises at cats.

And the author is giving away 2 e-arc’s of her book. Awesome, right? So enter the rafflecopter for a chance to win:
a Rafflecopter giveaway

2 responses to “Cover Reveal: Stars in her Eyes (Sparkstone #1) by Clare Marshall”