Today is the cover reveal for Seven Day Fiancé (Love and Games #2) by Rachel Harris. let me show you the cover first: 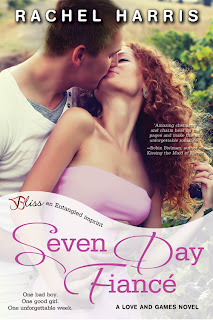 As far as romance covers go, I think it’s a nice cover. I like the pink colour on it. And the curly red hair of the female model.

Excerpt:
Angelle stopped beside a folding table boasting boxes of fresh, crispy cracklins and selected a thick piece. Cane watched, mesmerized, as she puckered those gorgeous lips and blew on the sliver. With a flirtatious glint in her eyes, she held it up to his mouth, and he opened.
Holy crap.
He’d had cracklins before. Fried pork fat was a standard gas station treat, usually shrink-wrapped and stale as shit. But this, fresh from the pot and piping hot, was unbelievable. Cane widened his eyes, and it was possible he even moaned. It was thatgood. And as he swallowed, Angel rewarded him with a rich, throaty laugh.
“Ca c’est bon?” she asked, grinning when he grabbed another handful.
He touched her nose and popped a piece in his mouth. “Good would be an understatement.”
Grinning, she took a fried morsel for herself and sent the balding, overweight gentleman tending the table a wink. “Now that’s what we like to hear.” Then she closed her eyes as she savored the treat.
The sounds of Angel moaning, and watching her face soften in the throes of a foodgasm, had to be the sexiest damn thing Cane had ever seen. His pants tightened, embarrassingly so considering he knew the audience was still watching, but what pushed him over the edge was when her eyes opened. The pleasure in them was his undoing.
Feeling the weight of the crowd’s disapproving stares and not giving a damn, figuring now was as good a time as any to give the people the show they clearly wanted, he grasped her hip and tugged her forward, pausing only to inhale her gasp of surprise before brushing her mouth with his.
It was like setting off a damn forest fire.
Angelle, his shocking little hellcat, pounced. Forgetting all about their audience, or maybe not giving a damn either, she wound her arms around his neck, lifted onto her toes, and kissed him back with everything she had. Cane had intended to steal a quick taste, take the edge off his craving for her, and prove their point with the town’s people. But hell if he was gonna be the one to back down now. Tightening his grasp on her slim hips, he brushed his thumbs across the smooth, exposed skin near her waistband. He deepened the kiss, thrilling over her telltale shiver. Whimpering, she yanked on the hair at his nape and sucked his bottom lip into her mouth. Hot damn.
Okay, now he had to start backing down. With all her male relatives watching, not to mention the knives and axes still lying around from the butchering earlier, if Cane valued his life, he needed to wrangle control of the situation. He’d heard patience was a virtue. That was a line of bull—he’d always sucked at waiting for anything he wanted. But for Angel, he was willing to try.
Loosening his grip on her belt loops, Cane slowed the intensity of the kiss. He smoothed the hem of her shirt down, grazed her lips one last time, and, placing his forehead against hers, inhaled through his nose. Sunflowers mixed with cayenne may be his new favorite scent. Angelle released a heavy breath, a flush blooming on her cheeks. She darted a glance at the crowd, then looking into his eyes, grinned lazily. “My goodness. If anyone doubted we were a couple before, I guess that showed them.” 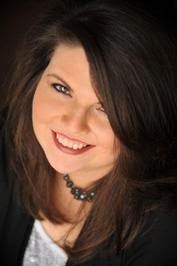 I grew up in New Orleans, where I watched soap operas with my grandmother and stayed up late sneak reading my mama’s favorite romance novels. Now a Cajun cowgirl living in Houston, I still stay up way too late reading my favorite romances, only now, I can do so openly. I firmly believe life’s problems can be solved with a hot, powdered-sugar-coated beignet or a thick slice of king cake, and that screaming at strangers for cheap, plastic beads is acceptable behavior in certain situations.

When not typing furiously or flipping pages in an enthralling romance, I homeschool my two beautiful girls and watch reality television with my amazing husband.

I write YA, NA, and Adult Fun & Flirty Escapes. Taste The Heat is my adult romance debut, and I’m also the author of MY SUPER SWEET SIXTEENTH CENTURY and A TALE OF TWO CENTURIES, as well as a ton of other books to come. I love hearing from readers and dishing books!