Blurb:
All this while, Matilda’s shadow had been growing larger and larger. Suddenly, it lunged out of the ground and swallowed her, like a python does its unsuspecting prey.

Nine year old Matilda ends up with a century old book through a series of strange coincidences. And disappears. Her brother and cousins are forced to suspend their hostilities and pursue her to Sceadu, a land inside the human shadow. Once there, the reluctant visitors find themselves chased by the vicious Hefigans, creatures of Sceadu. However, everything changes with the revelation of an ancient prophecy that foretells the doom of the world they left behind.

With the stakes suddenly raised, the children must now navigate the dangerous terrain, overcome grave challenges, and unlock the secrets of the shadow. But can they do it in time to thwart the plans of the treacherous Hefigans? Or will they succumb to the guile of a ruthless enemy who is equally determined to destroy mankind?

Sceadu is a fast-paced adventure which blurs the boundary between the physical and the psychological, the real and the mythical.

You can find Sceadu on Goodreads.

My Cover Review:
This is a cover that captures my attention because of how different it is from most covers out there. The gold mask in the backgroudn gives the cover a creepy feel and I like how the peopel are protrayed as sillouettes that are running away. It just gives me shadowy and slightly creepy feel, which fits the blurb and title!

The fantasy genre can be easily deducted from the cover, although from only seeing the cover I would think of thriller, mystery or maybe even some horror as well.

Th combination of the gold and black, really works well for this cover and I think it helps accentuate the creepy feel of the cover. I do think that mask face is kinda ugly and while it’s a well done cover it isn’t a cover I could stare at for a long time, that golden smiling mask face gives me the creeps!

Excerpt:
Matilda sat at her old wooden desk, staring into the thick yellowed pages of a book under a dull moth ridden beam cast by the night lamp. But every time she blinked, it seemed as if the words had played a round of musical chairs. And the moths, fluttering through the words at times and hovering over them at others, did not make things any easier.

Matilda was about to turn the page when there was a tug at her feet. It was a very gentle one, almost imperceptible. Surprised, she glanced down, but there was nothing. Perhaps it’s just my imagination, she thought. She was about to shake her thick dark brown curls out of her face when she felt it again.

Matilda pushed her head down and looked into the dark void with furrowed brow. Her skinny legs stared back. But before she could decide on whether she had actually felt anything, there was another tug, an unmistakable one this time. And another one. The truth suddenly dawned upon Matilda. It was her shadow, trying to drag her into itself.

Matilda jerked back the chair, kicking hard at her shadow. But it snapped back, pulling at her even more viciously. She stomped upon it repeatedly. But the dark grey shape began jabbing at her feet and ankles. Matilda pushed herself up and made a frantic attempt to run. But her legs refused to move, and she almost toppled forward.

All this while, Matilda’s shadow had been growing larger and larger. Suddenly, it lunged out of the ground and swallowed her, like a python does its unsuspecting prey. 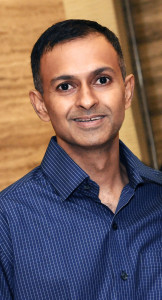 About the Author:
I grew up in the quiet and beautiful neighbourhood of Shivaji Park in Mumbai, India.

My schooling happened at the famed Bombay Scottish School where I was a rather conscientious student while my college years were spent at D. G. Ruparel College. I completed my bachelor of science in electrical engineering from Purdue University with a brilliant semester at the University of New South Wales. I followed it with a master of science in management from Lancaster University, a post graduate program in management from Indian School of Business, and a post MBA master in international management from Thunderbird School of Global Management. And yes, there is a simple explanation to all this. I love campus life.

I started my professional career as an engineer at Rockwell Collins in Cedar Rapids, Iowa. Once the monotony got to me, I returned back to join our family business in Mumbai, where I have been ever since. More recently, I have settled in the role of a consultant in my own marketing and branding firm, Media Panther.

My foray into the world of writing happened in 2003 after I had a dream that compelled me to stumble out of bed and put pen to paper. But that book is yet to be written. In the meantime, I happily string words together in my quest for Nirvana.

In my spare time, I enjoy collecting old coins, reading fiction, indulging my creativity (I have recently written and produced a short film, Freedom of Expression), travelling to exotic destinations, watching movies, and listening to music. I am also keenly interested in the subjects of psychology, mythology and ancient history.

I live with my wife and son in Mumbai.