Today is the cover reveal for Hereditary by JA Belfield. Hereditary is a short story that can be read independently of the series and will be available for FREE. 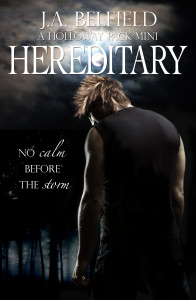 My cover Review:
I really like this cover. To me it screams werewolf with that dark feeling and forest in the background. And I like how the model seems to be batttling something. I also like the tagline, it just fits this story!