Today I am part of the cover reveal for Ghost Hold. I have gotten the first book Ghost hand for review and since then i have been eagerly awaiting the next book. I have to wait a bit longer for the book itself, but at least now it has a cover. It features the main characters from the book, Olivia Black, Marcus Jordan, and Passion Wainwright, was designed by Scarlett Rugers Designs of Australia. Take a look: 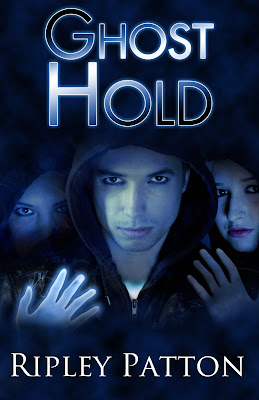 I love how it matches the first cover with the blue colours and the same font. I also like that all the main character are on the cover and the ghost hand!Although the girl on the right does seem s abit too scared and it seems like both girls are hiding behind the guy in the front. But beside that I think it’s a great cover. And here is how it looks next to Ghost Hand:

Awesome right? Okay so now a bit more about the book and such.

Curious to know what the book is about? Here’s the blurb:

Olivia Black is back.

Only this time she’s not the one in need of rescue.

Samantha James, rich, popular, and an award-winning composer at age seventeen, is the next target on the CAMFers’ list. And in order to convince Samantha to come with them, Olivia and Passion must pose as cousins, blend into the most affluent high school in Indianapolis, and infiltrate a mysterious cult known as The Hold.

Olivia doesn’t expect it to be easy, even with the PSS guys backing them up. But what she discovers over the course of the mission will call into question everything she ever believed about herself, her ghost hand, and especially about Marcus, the guy she is undoubtedly falling in love with.

Ghost Hold is in the final stages of publication, which will ultimately be funded through the GHOST HOLD KICKSTARTER PROJECT, just as Ghost Hand was funded last year. The current Ghost Hold Kickstarter project was 41% funded in the first week, and when it reaches the halfway mark of $1250, Ripley is going to release the first chapter of the new book to all backers, with more chapters to come later as funding builds.

You can let Ripley know what you think of the cover at the Kickstarter Project or here in the comments. The project ends July 1st and it’s the only way to pre-order the book before its September release.