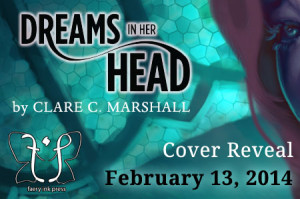 Today is the cover reveal for Dreams in Her Head (Sparkstone Saga #2), I also participated in the cover reveal for the Stars in Her Eyes (Sparkstone Saga #1) when it was revealed, so I just had to sign-up and participate in this cover reveal too. This also reminds me I really have to read the first book soon, it sounds like such a great series. Okay enough talk, let me show you the cover first and then some more information about this book and the author and there is giveaway! 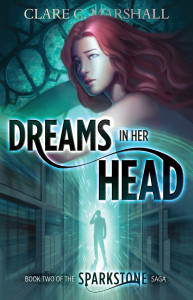 I think this is a nice cover and it perfectly fits the cover of the first book. It also has that space feel on the cover and it makes me wonder why the model looks so troubled and what’s up with the glowing guy.

Blurb:
Open the door.
Step quickly, step through.
Breathe in the darkness,
Until you are its master.
Ingrid Stanley is in more trouble than she knows. Ingrid’s dead friend keeps showing up in her dreams along with mysterious visions that feel all-too real. What’s worse is now the Collective knows that Ingrid is supposed to have superpowers. They’re waiting to pounce the moment Ingrid and her new superpower-wielding friends make a mistake.
When her family is threatened by Professor Jadore, Ingrid decides it’s time to take matters into her own hands. A little student protest can’t go wrong, she thinks. Not when her almost-boyfriend Ethan is fully supporting it. Not when her friends put an innocent student’s life in danger to make it successful.
Not when a powerful alien is waiting for Ingrid to inadvertently summon him into this world.
Everything’s going to be fine. Absolutely no one will get hurt this time.
…right?
Wrong, and wrong again.

Here are the covers for Dreams in Her Head and Star in Her Eyes next to each other: 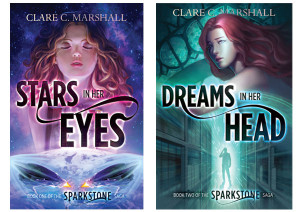 You can add Stars in Her Eyes, the first book in the Sparkstone  series to your to-read list on Goodreads 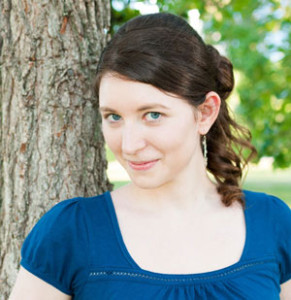 Clare Marshall grew up in rural Nova Scotia with very little television and dial up internet, and yet, she turned out okay. She has a combined honours degree in journalism and psychology from the University of King’s College, and is a graduate from Humber College’s Creative Book Publishing Program. She is a full time freelance editor, book designer, and web manager. When she’s not writing, she enjoys playing the fiddle and making silly noises at cats.