I am so glad to be part of the Shucked Book Blitz! As soon as I read the blurb I knew I wanted to be part of the book blitz and not only that, but I also bought a copy of the book. Unfortunately I haven’t gotten time to read Shucked yet. Today I give you some information about the book, the author, an excerpt, a Q&A and a giveaway! 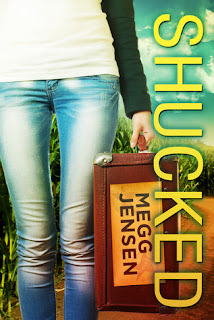 Fifteen-year-old Tabitha has had the kind of life that would impress even the greatest adventurers. She’s escaped a croc attack in the Amazon, walked the length of the Great Wall of China, and earned a black belt in taekwondo in Korea. She owes her worldly experience to her mother’s career in archaeology, but when her mother takes on a dangerous new assignment, Tabitha is devastated to learn she can’t tag along.

Instead, she’s forced to live on a midwestern farm with her grandparents where she’ll have to attend a full year of public school. It’s Tabitha’s greatest nightmare, because despite all her adventures, she has no practical experience with the one thing that frightens her the most – other teenagers.

Her math teacher is her mom’s old high school boyfriend, she can’t tell the friendly girls from the mean ones, and she develops a major crush on a boy she knows she can’t trust. And just when she thinks she’ll never get the hang of this normal teenager thing, an attack brings the danger of her previous life right up to her midwestern porch. Who could have ever guessed getting totally shucked would bring her face-to-face with her most exciting adventure yet?

You can add Shucked to your to-read list on Goodreads

Excerpt:
“Smith?” she barked at me. Yes, Smith is my last name. Unique, I know.
“Yes, Mrs. Jordan?” I asked in the sweetest voice I had.
“You,” she pointed at Becky, “hit the showers.”
Becky wiggled her fingers at me in a little wave. On the way to the locker room, she stubbed her toe. Becky hopped precariously on one foot while massaging the other. I was dying to see her walk a runway in heels after that.
I eyed the gym teacher. I’d been out of the country for a long time, but I was quite sure mullets went out of style about twenty years ago. Someone forgot to give her the memo on that. If Highlights Gone Wrong was a reality show, surely she’d be on it.
“You haven’t signed up for a sports team yet.” Mrs. Jordan dropped next to me on the bleachers, hiking up her pants as she sat. Legs spread wide, she rested her elbow on her knees, put her chin in her hands, and stared at me.
“Sports team?” I repeated.
“There’s nothing in your file about playing an instrument, right?”
I’d learned elementary didjeridu during a quick stint in Australia. I couldn’t imagine they had a section for that here. I shook my head.
“You are required to participate in an extra-curricular activity. Marching band is out. What skills do you have?”
I thought quickly. I didn’t want to end up on an awful team. Too short for volleyball. Too slow for track. No penis for football. What did that leave me?
“I am a black belt in taekwondo,” I said, sure that I could get a spot on their martial arts team. I could probably disable them all with a glance. I sat up straighter, my shoulders back.
Mrs. Jordan’s eyes widened. “Taekwondo? You beat people up?”
“Well, kind of,” I said, puffing up my chest with pride. Not many people would suspect tiny me to be dangerous. I liked that. “It’s more self-defense than attack strategies, but if pressed, yes, I can hurt someone. I have this amazing jump-kick combination that never fails to knock people off their feet. I also learned how to flip over someone’s kick to avoid being hit. It’s really amazing.”
I stopped when I realized Mrs. Jordan was staring at me. Yes, I was babbling. Yes, maybe I sounded a tad like Becky. But hey, how often did I get to discuss my martial arts experience with a fellow fitness enthusiast? Mrs. Jordan didn’t have an ounce of fat on her. Obviously she would understand the amazing things the human body can accomplish when pushed.
“Perfect,” she said. “Then it’s decided.” A smile spread across Mrs. Jordan’s face. It echoed on mine. Not only was I being invited to join their martial arts team, but I bet she was about to make me captain.
“I’m honored,” I said.
“Wonderful!” Mrs. Jordan clapped me on the back. “You’ll be a great addition to our cheerleading squad.”
How many circles of hell did Dante discover?

And there is a Q&A with the author. I haven’t come up with these questions, I got this as part of the book blitz. But I think the questions and answers are great, so here they are:

Q: Why did you decide to write a contemporary YA after spending the last three years writing high fantasy with the Song of Eloh Saga?
A: Shucked has been floating around my brain for close to seven years, but I always wanted to be known as a fantasy author, so I kept pushing Tabitha to the side. In January, she decided to grab a hold of me and not let go.
Q: Why did you set the novel on a farm?
A: I grew up on a farm and have always wanted to write about life there. Shucked gave me a chance to do that. It was a lot of fun writing about some of the thing that were normal to me as a kid that aren’t normal to everyone else. I adore my farming community and loved incorporating that small town spirit into the book.
Q: Where did you come up with the idea for the cover? I love it!
A: It wasn’t easy. I have a fantastic cover designer, Steven Novak (www.novakillustration.com). Usually he designs a cover, I say yes, and we’re done. This time I felt like the concept was a lot harder to nail down. He worked through four or five different version with me. I couldn’t be happier with the cover that you’re seeing now.
Q: Tell me about the title, Shucked.
A: Haha, that was another toughie. From the beginning, the file on my computer for this book was Adventure. It wasn’t until I became serious about publishing it that I realized I needed a unique title. I went through close to a hundred different ideas, but none of them felt right. Eventually I settled on Digging In. I figured it was the best I would come up with. About two weeks before publication, I finally had that stroke of brilliance with Shucked. Not only does it scream farm (shucking corn), it also is representative of what happens to Tabitha during the book (having her emotional layers peeled away), and there’s always the street meaning, which you can look up on Urban Dictionary if you want. Lol
Q: Will you write more contemporary novels?
A: I hope so! Right now I’m working on my next high fantasy, but Tabitha’s still in the back of my mind, begging for a continuation of her story. While Shucked easily works as a stand-alone novel, I think we all know that no one’s story really ever ends. There’s always tomorrow. 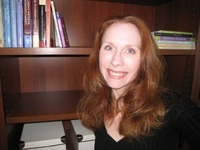 I’ve been a freelance parenting journalist since 2003 and began writing YA novels in 2009. I co-run DarkSide Publishing, am a member of SCBWI, and I blog about writing while juggling freelancing, volunteering, and family life. I live in the Chicago suburbs with my husband, two kids, and our miniature schnauzer, Ace.

Remember that giveaway I mentioned? Well it’s here! One lucky winner wins both an e-copy of Shucked and 3 bookmarks. So go enter the giveaway for a chance to win!