Today is my stop during the blog tour for Wings of Arian by Devri Walls. I share an excert of the book with you. 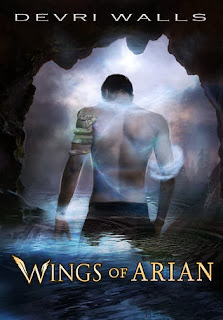 Blurb:
Kiora thought she had never heard a lie until she was sixteen. But she was wrong. Her entire existence was based on nothing but. She thought that evil did not exist. Lie. That magic was not real. Lie. And that the land of Meros was all there was. One more lie.

With Aleric telling her that evil is knocking on the door and that she is the only one who can stop them she has a choice to make. Refuse, or start the wildest most painful ride of her life.

She reluctantly dips her toe into her new existence of magic and threads, dragons and shapeshifters, and the person who wants to take control of it all: the evil Dralazar.

However, this journey was never meant to be hers alone. She will be accompanied by a Protector. To her disbelief, and utter irritation they name the hotheaded, stubborn, non-magical, (albeit gorgeous) Prince Emane. They will have to trust each other with their lives, but right now Kiora would settle for a non hostile conversation.

And now it comes down to this, If you had never heard a lie, would you know when you heard one? Is knowing good from evil innate? Kiora finds herself having to decide who lives and who dies on those very questions.

You can buy Wings of Arian here:
– Amazon
– B&N

Excerpt:
Emane’s arms were burning as he slung the pickax into the wall, trying to extract the vein of bright green from the stone walls. He swung over and over again at the section he had been working on for two days now. Stopping to wipe the sweat out of his eyes, he looked over at Drustan, who had been supervising.
“Tell me again,” he huffed, “why I am the only one who can get this stuff out.”
“If the magic is to bond with you it must be forged by you. To not forge it yourself would be risking not being able to use it at all.”
“Right,” Emane panted as he swung the ax again at the vein. “And after I get this out, what then? You haven’t been very clear on that part.” Despite the fact that he had asked Drustan multiple times.
“Then you may use it.”
“I understood that part. It was the part about inserting it that you refuse to explain. That is what has me concerned.”
Drustan sighed, “You humans really are the most impatient creatures I have ever met.”
“Really?” Emane slammed the ax into the wall again, channeling his frustration through it. “I thought I was being quite patient. I have been hammering at this wall for two days with no real explanation about what we are doing after I am finished here.” A large chunk of rock mottled with the green material fell to the floor. Emane picked it up and handed it to Drustan.
“Good, a couple more pieces this size and we will be ready to extract it.”
“You are ignoring me.” Again, he thought as he slung the pickax.
“I have told you, Emane, we want to put the material inside of your body, so that it cannot be removed or lost.”
“Yes, I have heard that. What I have not heard is how you plan to do that.”
“It will be explained Emane, just be patient.”
Emane swung the ax into the wall trying to bash away the gnawing feeling that he should be very worried about this plan. Something about this was not right. He didn’t need magic to know what his instincts were telling him.

About the author:
Devri Walls lives in Kuna Idaho with her husband and two kids. She has worked as a music teacher and currently, a preschool teacher. She majored in theater and her love of a story still drives her today. Thankfully, she has finally found an outlet for all the voices in her head.