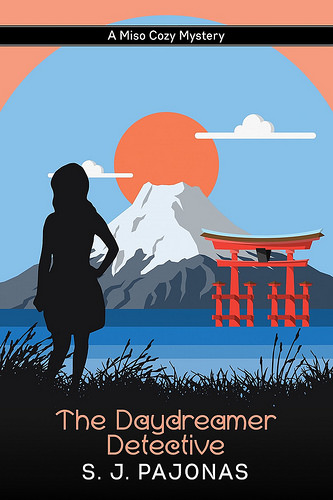 You can find The Daydreamer Detective on Goodreads

You can buy The Daydreamer Detective here:
– Amazon 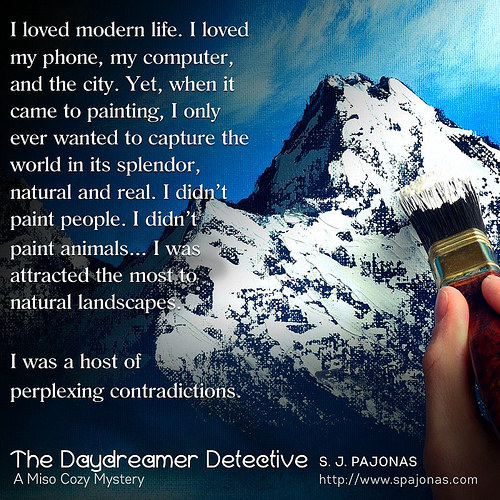 Lola: Hi SJ Pajonas! I am so excited to have you on my blog today! All of your books have something to do with Japan, so I am curious why Japan?

SJ Pajonas: So, before I quit work to stay home with my kids, I worked in New York City and took Japanese language classes twice per week. I really loved being immersed in the Japanese language, studying it, and conversing with others in Japanese. I had studied Japanese for six years prior to having my first child, made a lot of friends who spoke Japanese, and even went to Japan during that time. The Japanese language and Japanese culture were very close to me! Then I had two children and stayed home from work. This meant that I was no longer taking Japanese language classes and I missed it. So when I got the idea to start writing again, and I had the idea for the Nogiku series, it was my way of being immersed in Japan again. I don’t study the language is much as I used to, but I study the culture more now. Writing these books gives me the chance to be present in Japan, and though I genre hop from romance to mysteries to science fiction, there’s always a little bit of Japan at the core.

Lola: That’s interesting writing the Nogiku series was a way to immerse yourself in Japan again. I think your study of the culture really shines through in your books and it’s obvious you know a lot about the subject.
If you could visit japan again, which places are on your top of your list to visit?

SJ Pajonas: I’m planning to visit Japan in August! And I can’t wait. I will fly into Tokyo and probably spend most of my week there. I would like to take the shinkansen to Kyoto for a day, and there are other small daily excursions I want to go on. I also really want to see Tsukiji fish market because it will be closed later this year and moved to a different part of Tokyo. My plan is to just go and soak it all in. I want to take photos, eat food, and come back to my hotel room every day exhausted. I started a Pinterest board recently called “Going to Japan in 2016” and it’s already filling up with tons of food I want to eat. LOL. Typical.

Lola: That’s so exciting you’ll be visiting Japan in August! I hope it will be an awesome trip!
Where in japan is this book set? Can you tell us a bit about the place and why you decided to set this book there?

SJ Pajonas: The Daydreamer Detective is set in a fictional town named Chikata. I completely made the place up but put it in the western part of Saitama prefecture in Japan. It was important that the town be within reach of Tokyo, but far enough away for it to be a small town. In the book, I give a few clues as to where I think it would be. A character named Ana mentions that she lives in Kawagoe which is “only a ten minute commute away” and then Yasahiro’s hometown is Chichibu, which is 90 minutes away by car. This should give people who look at a map a good idea of where Chikata may be.

The plot of The Daydreamer Detective came to me after seeing a short segment on NHK Newsline about a grocery store revitalizing a rural town by putting a greenhouse there. It was maybe a three minute segment, but it sparked a huge idea for me! So the premise of The Daydreamer Detective is based on a real-life situation, but everything else is fictional. I wanted to write about the revitalization of a rural town, a woman who is working to understand her own self-worth, and, in time with more books in this series, the elderly situation in Japan. That’s a little hint as to what’s to come.

Lola: Makes sense! I was wondering whether it was an actual town or a fictional town as you did mention the commute and how far it was from Tokyo, so it felt real. It’s amazing how such a short segment sparked the idea for this whole series.
The book mentions Japanese food and cuisine a few times, can you tell us a few of your favourite Japanese dishes?

SJ Pajonas: I have a few favorite Japanese dishes! My first is always tempura. I love deep fried vegetables and fish so this will always be at the top of my list. Plus, eating them with rice and the dipping sauce is so good. Grilled eel is another favorite of mine. I never thought I would like eel but now I really enjoy it. I also love udon or soba in a soup. Japanese noodles are so tasty! When I go to Japan next, I really want okonomiyaki, when is like an egg batter with vegetable and seafood pancake. I’ve never had it and it looks really good. I also am dying to try some Japanese sweets like dango and crazy flavored soft serve ice cream.

Lola: My sister used to make okonomiyaki, it’s really good! Although she did make it without seafood and added vegetarian meat for me. I hope you get to try it when you visit Japan. Grilled eel doesn’t sound good, but maybe it’s one of those things you just have to try. I do like tempura and Japanese noodles as well.
The Daydreamer Detective is your first cozy mystery book, why did you decide to write a cozy mystery series?

SJ Pajonas: I’ll admit that I decided on cozy mysteries on a whim. I knew I wanted to write a mystery and I wanted to write something with less violence, sex, and profanity, so that it would appeal to a wider audience than my scifi, which is a little darker. When I found cozy mysteries, it was totally by accident and I thought my idea would work well within the confines of the genre. I purposely did not read too many cozies before writing my own because I didn’t want to conform to a formula, but I think I still managed to deliver on the things cozy mystery readers are looking for.

Lola: I’ve read quite some cozy mysteries by now and I think you managed to make the book unique ad different from most cozy mysteries, while still including things cozy mysteries readers look for.
What did you enjoy most about writing a cozy mystery book?

SJ Pajonas: I enjoyed the fact that I could concentrate on both the mystery and the back stories of all my characters while writing a cozy. I loved setting an easy pace and developing a world that will house many different situations and characters for the length of the series. In a cozy, the setting and characters are just as important, if not more so, than the actual mysteries, and that’s what I loved most about them.

Lola: Yes that’s what I love about cozy mysteries too, it’s about the mystery, but also about the characters and the setting.
Which scenes where the most difficult ones to write?

SJ Pajonas: This is a hard question because I can only think that the big climax was probably the hardest and went through several revisions before I was happy with it. The Daydreamer Detective was the first book I plotted out meticulously ahead of time. I wrote on it every single day without stopping except to brainstorm a few more scenes before continuing. I did my best not to dwell on scenes or chapters so I wouldn’t get stuck. I also dictated a lot of this book which caused me to work hard and always keep going.

Lola: The big climax was a very intense scene, much more so than in most cozies I read, but I thought it was very well written.
I really like the cover for this book! How did you come up with the concept for the cover and who designed it?

SJ Pajonas: I designed these covers! Thank you! I wanted an illustrated cover for this book since they seem to be the norm for cozy mysteries. So I searched for flat Japan illustrations on stock photos sites until I found something I really liked. I also looked for illustrated Japanese women but didn’t find anything appropriate which is why I went with the silhouettes. I have the first 3 covers for the series planned and an idea for a novella connected novella as well.

Lola: I really like the style and I think it works well for the genre too. And I can’t wait to read the rest of this series and see the other covers.
If you had to describe this book in 140 characters, what would you say?

SJ Pajonas: Broke and jobless Mei Yamagawa returns to her rural Japanese hometown and helps solve the murder of her best friend’s father.

Lola: Cathy! I think it sums up the book main story line pretty well.
How would you describe the main character and the most important side character(s) in 3 words?

Lola: Thanks so much for stopping by and thanks for answering my questions! 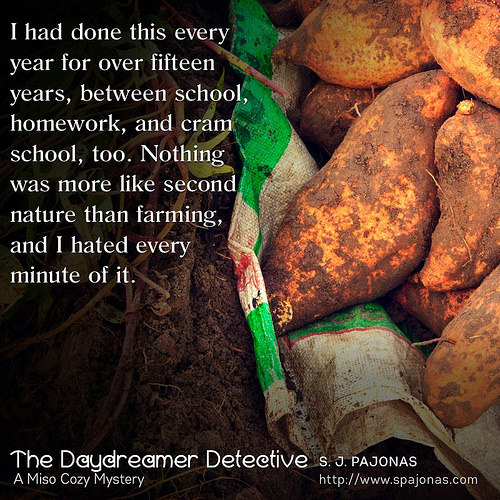 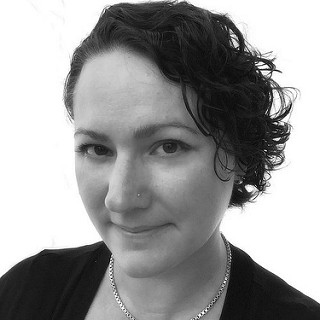 About the Author:
Stephanie (S. J.) is a writer, knitter, amateur astrologer, Capricorn, and Japanophile. She loves foxes, owls, sushi, yoga pants, Evernote, and black tea. When she’s not writing, she’s thinking about writing or spending time outside, unless it’s winter. She hates winter. Someday she’ll own a house in both hemispheres so she can avoid the season entirely. She’s a mom to two great kids and lives with her husband and family outside NYC. They have no pets. Yet. When it comes to her work, expect the unexpected. She doesn’t write anything typical. Find her online at http://www.spajonas.com.

Have you read any books set in Japan? And what’s your favourite Japanese dish?