Today is my stop during the blog tour for Summer in Shambles by Ebony McKenna. I’ll share an excerpt with you and there’s a tour wide giveaway! 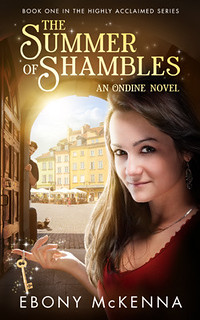 Dive into this wonderfully witty young adult series from author Ebony McKenna, set in the far off European country of Brugel.

15-year-old Ondine is struggling to fit in at Psychic Summercamp and doubts she possesses any of her family’s magical abilities. She resolves to leave, determined to follow her own path and be a normal teenager. Whatever normal is in a place like Brugel.

On the way home Ondine is shocked when her pet ferret Shambles starts talking – in a cheeky Scottish accent no less! He is in fact a young man trapped in a witch’s curse. When he briefly transforms into his human self, Ondine is smitten. If only she can break the spell for good, Shambles can be handsomely human on a full-time basis.

During the summer, these two misfits uncover a plot to assassinate a member of the royal family and discover a secret treasure that has remained hidden for decades. This attracts the attention of the arrogant Lord Vincent, and Ondine can’t help being drawn in by his bad-boy charm.

With so many demands on Ondine’s attentions – and affections – normal has never seemed so far away.

The Summer of Shambles is the first in the four-part ONDINE series. Fans of The Princess Bride or the Confessions of Georgia Nicolson series will love this delightfully quirky fairytale.

For all other territories and formats please go to this page
http://www.ebonymckenna.com/novels/ondine_the_summer_of_shambles/otsos_synopsis.html

Excerpt:
With a yelp of shock, the ferret dropped backwards off the edge of the table, dragging the tablecloth down with him.
“Shambles!” Ondine screamed, racing towards him.
He lay there, a lump underneath the fabric, moaning in pain.
“Oh, my darling, I’m so sorry!” Ondine cried. She didn’t need to look around to know Melody was standing behind her, probably just as freaked out as she was. Ondine pulled the tablecloth back to reveal Shambles’s head and give him some fresh air.
Shambles groaned even louder. “Oh, the pain!”
“He can talk! Great heavens! Shambles can talk!” Melody said, amazed.
“You heard that?” Ondine’s heart picked up speed at the revelation, yet there was little time to explain it all. If she thought Melody being able to understand Shambles was a shock, she had an even bigger one coming.
As he lay groaning and writhing on the ground, twisting and turning under the tablecloth, Shambles grew to twice his size and his face fur matted together, forming skin. The long whiskers retracted and his head began to bulge.
“I’m dying!” he cried out to Ondine. “Bring me whisky, I’m dying!”
The dream. That horrible dream!
“Mercury’s wings!” Ondine cried as great wet tears splashed down her face and on to Shambles’s writhing, deformed body. “You can’t die, Shambles! I won’t let you!”
“I’ll get Mrs Howser,” Melody said, and ran back inside.
“Oh God, oh God,” Shambles groaned, “I’m goin’ tae boak.”[1]
“No, Shambles, you’ll be OK. Melody’s getting help,” Ondine said, although what help anyone could be at this present moment escaped her. On the other hand, a witch had got him into this mess; maybe a witch could get him out of it?
Confusion scrambled her brain. She couldn’t think what to do – she’d never seen anything like this before and didn’t even know how to start helping him. All she could do was stand back as Shambles kept growing and expanding under the tablecloth. Moaning and groaning about the state of his gelatinous body. All the while his face pulsed and wobbled. A horrible thought made Ondine feel ashamed for even thinking it.
What if his face set like that?
“There’s the light,” he said. “It’s calling me, I have tae go tae the light.”
Fear making her tremble, Ondine looked in the same direction. Her horrible dream was about to become reality.
As she turned her head, she felt her stomach lurch as a white light shone on her face. A moment later, blessed relief coursed through her. “That’s not the light, Shambles. That’s just the full moon, you bampot.”
When she turned to check on Shambles, her breath hitched. He’d stopped thrashing about, stopped moaning and groaning. Now he was shivering.
And completely human.
The next surprise came straight after the first, as Shambles looked up at Ondine. Far from looking like a bucket of twisted shoes, his face could have belonged to a movie star. He was even more handsome than Lord Vincent. With a shock of black hair and a dangerous gleam in his green eyes.
He was glorious!
Heat coursed through her body and her tongue turned to sandpaper as she tried to swallow. Something flip-flopped in her belly. Thank heavens for the tablecloth, because from the looks of things, he didn’t have a patch of clothing on. Ondine’s pulse hammered freshly in her ears.
I’m going to have a heart attack before I make sixteen.
“I’m nawt dead,” he said at last.
Despite her concern for some modicum of decorum, a smile broadened her face and happiness bubbled in her veins. Heavens above, her dream had been wrong. Way wrong.
Those devilish green eyes stayed fixed on hers, while a lopsided grin added a mischievous gleam. Suddenly she averted her gaze and dropped her lashes so she could study the ground.
“I’m nawt dead,” Shambles said again, louder this time as he turned his hands back and forth in the moonlight. Then he wrapped the tablecloth around his middle, stood up and shook his head in amazement. He took a step closer and cupped Ondine’s cheek in his palm. Heat seared her face. “The dream didn’t come true.”
“The . . . the . . .” The dream? He knew about it?
“You’re not dead by a long shot,” Old Aunt Col said from the doorway, making Ondine and Shambles-Hamish turn quickly to see they had company.
“But if you lay a finger on my grand-niece, you’ll wish you were.”
Indeed, they had an audience, including Ondine’s mother who, from the shocked look on her face, had seen quite a bit too. 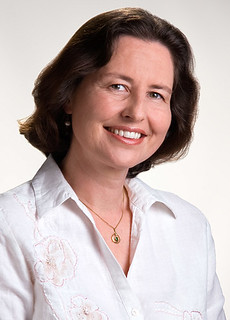 Ebony McKenna lives in Melbourne, Australia with her husband and son.
She has worked as a journalist, market researcher, website editor, and company director.
As a teenager, she lived in a family-run restaurant. This provided the inspiration for Ondine’s family, as Ebony has also waitressed, prepared food and yep, she washed dishes. So many dishes.
Now she writes novels for a living, so her hands are dry. Except for when her characters are making her laugh too much and she has to wipe tears away so she can see the keyboard.

There is a Tour-wide giveaway (INTL), here’s what you can win:
– Cute swag pack including a ferret pin, a tree ornament, some cute note cards and envelopes
– Ebooks of the Ondine series

4 responses to “Blog Tour: Summer in Shambles by Ebony McKenna”