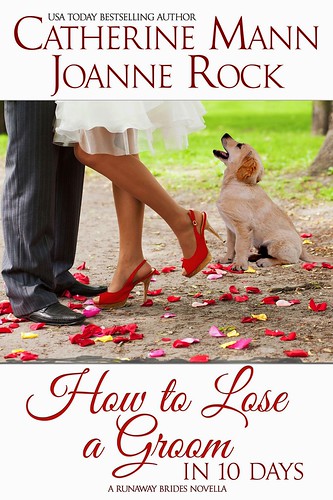 How to Lose a Groom in 10 Days (Runaway Brides #0.5)
by Catherine Mann and Joanne Rock

Blurb:
He thought their love was a grand slam, until his bride called foul…

After an impulsive courthouse wedding with one of baseball’s rising stars, landscaper Melanie Webb wonders if she’s fallen victim to lust at first sight. She hardly knows Grady Hollis, the Atlanta outfielder who swooped into her Florida hometown and charmed the socks—and more!—right off her. She couldn’t resist when he proposed under the stars right on the outfield she’d worked so hard to maintain. But when the aftermath means moving to Atlanta and following him around the country for his eight-month a year travel schedule, she gets cold feet.

But Grady has never been a man to give up on a dream and Melanie is everything he ever hoped for in a woman. He knows if only he can convince her to come along for the ride, he’ll convince her that their forever can be something special… and sizzling too. The road trip brings them both deeper understanding, surprise revelations and a love every bit as fiery as the passion.

The Runaway Bride Series
Book 1: How to Lose a Groom in 10 Days
Book 2: The Wedding Audition

This was such a fun and enjoyable story. It tells the story of Grady and Melanie who after ten weeks of knowing each other get married, but Melanie gets cold feet. Then starts a sort of challenge were Grady tried to convince Melanie that what they have is real, while Melanie tried to convince him that he doesn’t know her and they are better apart. At first I wasn’t really sure of where this story went and if I would enjoy it, but it wonderfully written and it was enjoyable to see them trying to figure out their relationship and what to do next. Also while this novella is relatively short, the pace was done right. We do get a snapshot of their lives, but we still learn a lot about these characters and get a good idea of how those past 10 weeks have been and even learned things about their past and what they want from their future.

Grady was an amazing character, he was fighting for their relationship and is showing Melanie what they have, while also respecting her need for some distance. he was the perfect gentlemen and there are these little touches that really shows he cares, like with the peonies. Then there is Michelle, I have to admit I wanted to shake some sense in her at times, she has this wonderful man and she wants to divorce, while it was obvious they were right together. On the other hand I think the situation just caught up on her, which is understandable. She always has been happy and light around Grady and isn’t sure if he can deal with her other side. Then she has some family issues and she never mentioned any of that and now she’s panicking about it.

This book is full of sweet and fun scenes and even some hot ones. There is no doubt they have chemistry, but there’s also much more. And even though the story was short we learn so much about these two characters. I especially loved the scene at the pet store and the little puppy was a fun addition and necessary for them to realize some things. There’s also a scene towards the end that was really well done where Melanie stands up for what she wants and finally figures out her stand on things.

To conclude: this was a fun and sweet story. I really felt the romance and thought these two were great for each other, they just have to realize it themselves as well. I loved how Grady fought for their marriage, while Melanie had her doubts. Add in an adorable puppy and some sweet and hot scenes and this was a fun read. Looking forward to the rest of this series!

You can add get your free copy of How to Lose a Groom in 10 Days here:
– Amazon
– Kobo
– iTunes
– Google Play
– Smashwords 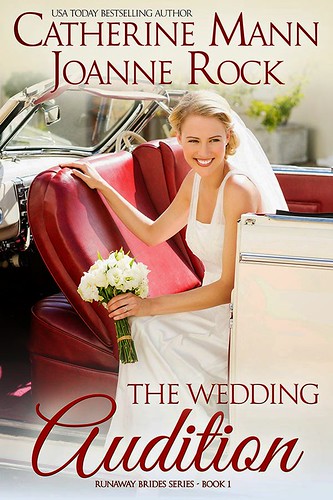 Blurb:
The tabloids call her the Hit and Run Bride after reality show star Annamae Jessup walked out on Atlanta’s favorite baseball player on cable television. Eager to escape her notoriety, Annamae takes a road trip to find the grandmother she’s never met and winds up discovering a whole lot more than a band of back woods relatives. There’s no escape from reality TV, even in Beulah, Alabama, population 3000.

The last thing Wynn Rafferty needs in his new life is a spoiled television princess who can’t even know his real name. He’s in temporary witness protection as an apple farmer after his undercover work put his life in danger. He needs to lay low until the heat dies down from his last case— even if he sucks at growing apples as badly as he sucks at relationships. But Annamae turns his new town into a media circus, unwittingly threatening the lives of him, her and most of Beulah. Wynn is an expert at keeping the world at arm’s length, but when it comes to Annamae, the only way he can keep her safe is to keep her very, very close.

My Review:
I receive a copy in exchange for an honest review

This was such a fun and enjoyable book. The tone was light, while still dealing with some serious and heavier issues as well, but overall this book was just a lot of fun. Annamae accidentally breaks-up with her fiancé on real life television and radio and then decides she has had enough and takes off to spend some time in a small town. She ends up meeting her grandmother, who had never met before. And while looking for a house she meets Wynn, who is in witness protection as an apple farmer and a women on the run of reality tv is the last thing he needs in his life. The pace was done well and I really enjoyed this book. They land in these fun situations and every time you think they can have some peace and quiet another things happens to disrupt that all.

I liked both character immediately, Annamae is such a nice girl, but she also figures out she needs some time for herself to find out who she is. And I liked that she did what needed to be done and figure out who she was. And I think the break with reality tv did her good. Then there’s is Wynn who is in witness protection as his undercover work landed him in some trouble and he needs to stay hidden till the trial. That plan sort of goes down the drain as Annamae arrives, but he still tries his best. He was a great guy and protected those he cared about. There is a small suspense aspect there, but it’s a minor aspect. The side characters were also fun, even though we don’t get to know them that well. The focus was more on the two main characters. I did like Annamae her grandmother, she was a great character and a fun addition to the story. I also liked how she helped Annamae figure some things out.

The romance was well done and I was routing for these two characters, although they did feel in love a bit quickly. It did feel realistic and I liked seeing them grow closed. The ending was great and I already can’t wait for the next book in this series. Another thing I loved about this book is the small town setting and the apple orchard with the multiple cats running around. It was just a picturesque setting and I really enjoyed it.

To conclude: This was a fun and enjoyable book with a light feel to it. Annamae accidentally breaks up with her fiancé on reality tv and decides to take a road trip and find her grandma. She ends up finding a nice apple orchard to stay and falls in love with Wynn. Their romance was sweet and adorable with a few hot scenes as well. And I loved the small town setting with the apple orchard. I am looking forward to the rest of the books in this series! 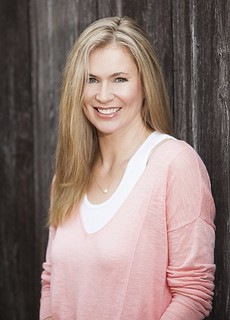 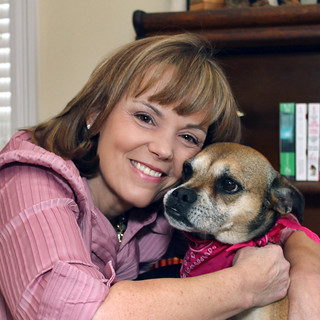 About the author: Catherine Mann
USA Today bestseller and RITA Award winning author Catherine Mann writes contemporary romance for Berkley, Harlequin, Sourcebooks and Tule. With over sixty books released in more than twenty countries, she has also celebrated six RITA finals, an RT Reviewer’s Award finalist, three Maggie Award of Excellence finals and a Bookseller’s Best win. Catherine and her flyboy husband live on the Florida coast where they brought up their 4 children – and still have 5 four-legged, furry “children” (aka pets).

Catherine is an active volunteer with an animal rescue, serving on their Board of Directors and fostering over 200 puppies, ill dogs, and dogs with service/working potential.

There is a giveaway durign the blog tour for Runaway Brides! Here’s what you can win:
– US prize: For the Runaway Bride’s Great Escape–A heart-print tote, Scarf for going incognito, and cute dark sunglasses.
– INTL prize: A print copy of Catherine Mann’s RESCUE ME and Joanne Rock’s NIGHTS UNDER THE TENNESSEE STARS.