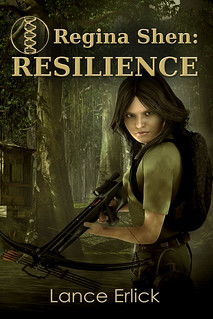 Blurb:
Outcast Regina Shen is forced by the World Federation to live on the seaward side of barrier walls built to hold back rising seas from abrupt climate change. A hurricane threatens to destroy what’s left of her world, tearing Regina from her family.
Global fertility has collapsed. Chief Inspector Joanne Demarco of the notorious Department of Antiquities believes Regina holds the key to avoid extinction. Regina fights to stay alive and avoid capture while hunting for her family.

Excerpt:
Inspector Joanne Demarco watched the growing storm system onscreen from the helm of her Department of Antiquities patrol boat in the middle of the Richmond Swamps. Waves broke along the port side. The hurricane will make landfall tomorrow night, she thought. A big storm would send tens of thousands of Marginals scrambling for the Barrier Walls created to hold out them as well as the seas. They’ll offer themselves into servitude for a chance to live.
She remembered those days as a child. She swore never to let anything return her to the life of a swamp rat. Yet here she was, doing the Federation’s dirty work. A promotion might improve that.
An alarm pierced the calm, the sort that would send you jumping for lifeboats. Demarco cursed under her breath, forced a smile, and locked the cabin door. She took a deep breath and activated her Mesh-reader.
North American Governor Gina Wilmette’s ancient face filled the screen with a wide canvas of wrinkles and tufts of skin. Like all Grand Old Dames, the governor was more than 300 years old. Meds, treatments, and replacement parts had helped, though she still looked like the fossils Demarco seized while clamping down on local salvage efforts.
“How’s my favorite Antiquities agent?” the governor said in a politically cheery voice.
I’m probably the only Antiquities agent you know. “There’s a storm brewing,” Demarco said, sending an image of the massive swirl on her weather screen to the governor. It was the biggest she could recall, as if three storms had merged into one.
“There always is,” the governor said, the mask of surgeries and makeup dulling any facial expression. “The reason I called is … are you aware fertility clinics are failing everywhere?”
“I was not, Your Majesty.” Though Demarco had heard rumors.
“We’ll need more than flimsy Barrier Walls to protect us from this. The Antarctic governor pretends she has matters under control, but they’re failing. Failing! The Federation made a huge mistake putting all our eggs in her basket, but she convinced the premier that Antarctica was the safest place on the planet.”
While the governor let off steam, Demarco contrasted the calm of the swamp around her to what this new storm would do. At least the southern continent didn’t have Marginals to deal with. Their glass-domed cities were impenetrable, though maybe that was a lie perpetrated by Antarctica’s Department of Antiquities. As North America’s chief inspector, Demarco had manipulated enough reports on behalf of Governor Wilmette to know how.
She returned her thoughts to the governor’s comments. Though birth rates had dropped worldwide, Demarco never suspected a conspiracy, certainly not one involving the rivalry between Wilmette and the Antarctic governor. “Do we know the cause?”
“My medical experts tell me more defects enter the process with each generation. EggFusion Fertilization now fails to provide live births. If we can’t solve this, we’re a generation away from extinction.”
The inspector mulled over the news. She had no children by choice, mostly the job, but the possibility of never having kids raised the stakes. This was the first time the governor discussed this issue so candidly. Demarco wondered why Wilmette was telling her now. Then it came.
“I need you to track down rumors of Marginal DNA offering better potential. They certainly replicate like mosquitoes.”
The chief inspector rarely interested herself in affairs beyond North America, but this was big. It was time to toady up to her boss and set expectations. “I’ll take this on personally, Your Majesty, but so far we’ve found no evidence.”
“Look harder.” The skin on the governor’s face pulled in various directions, as if all the surgery in the world couldn’t fix her. “You know what it means if we find a solution, even if it does come from our Marginal swamp rats.”
“I understand the urgency, Your Majesty. I’m on it.” A win could put the governor of North America in line as successor to the current Federation Premier, another GOD whose health was … less than robust. Yet what did that mean for Demarco? Well, failure meant return to the shrinking swamps as an outcast, or worse.
Demarco cleared her throat. “I sent you an image of the storm.”
“I see it.”
“Our meteorological group reports the super-cell will hit the east coast tomorrow night. Rains will be heavy with damaging winds. We expect flooding on our side of the Wall.”
“Your recommendation?” the governor asked.
“Open the dams. Push river and lake water beyond the Barrier.”
“Will that stabilize our water levels?”
“It’ll help. It’ll also thin out the Marginal population.” Demarco lowered her voice. “Meaning fewer candidates for—”
“I know what it means. Have all your resources to put tracking devices on Marginals and draw blood samples. When the storm comes, have patrols and bounty hunters round up all the girls. We’ll sort them later, use what we can, and throw back the rest.”
Like throwing back undersized sea bass, Demarco thought. “We’ll tag as many as we can. Then I’ll oversee the roundup. What about the dams?”
“Open them. I don’t need mayors complaining we let them down. Then find me girls with productive DNA.”

You can find Regina Shen: Resilience on Goodreads 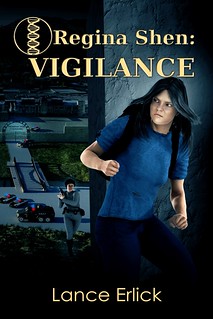 Blurb:
Regina Shen is pursued by the notorious Department of Antiquities for her unique DNA. She jumps the Barrier Wall into the Federation to find her kidnapped sister. Stuck on a heavily-guarded closed university campus, she must use her wits to escape and rescue her sister without letting either of two rival Antiquities inspectors capture her.

You can find Regina Shen: Vigilance on Goodreads

Blurb of the first two books/ series:
World: This takes place 400 years in the future after abrupt climate change has melted ice caps and flooded the coasts. Civilization collapsed and was replaced by a World Federation that suppresses knowledge from the past. Three-hundred-plus-year-old Grand Old Dames rule using a caste system.
Regina Shen is an outcast condemned by the World Federation to live on the seaward side of Barrier Walls built to hold back rising seas. She is Chinese-Hispanic, tough, lives by her wits, and thrives on salvage from sunken cities, including illegal print books from before the Great Collapse. She also has unique DNA the Federation believes can reverse a worldwide fertility collapse. Regina doesn’t trust the Federation.
Chief Inspector Joanne Demarco of the notorious Department of Antiquities polices Barrier Walls and destroys evidence from the past, including print books. Ambitious, she sees Regina as the key to securing her future.
Inspector Vikki Volpe is a ruthless hard-core Antiquities agent who believes Demarco has gone soft and wants the chief inspector’s job.
Book 1 (Regina Shen: Resilience): A hurricane threatens to destroy what’s left of Regina’s world. Separated from her sister, her mom, and her home, with Demarco in pursuit, Regina fights to stay alive and avoid capture while hunting for family.
Book 2 (Regina Shen: Vigilance): Pursued by the Department of Antiquities, Regina jumps the Barrier Wall into the Federation to find her kidnapped sister, and winds up on a closed-university campus with heavy surveillance. Regina must use her wits to escape and rescue her sister without letting either of two rival inspectors capture her. 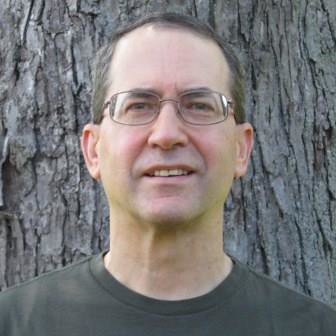 About the Author:
Lance Erlick likes to explore the mysteries of intriguing worlds with interesting, often strong female guides facing and overcoming adversity as they try to change their world. He hopes readers will enjoy his writing as they discover different worlds, going places they may never have been.
He writes science fiction thrillers, appealing to young adults and adult readers. He is the author of The Rebel Within, The Rebel Trap, and Rebels Divided, three books in the Rebel series. In those stories, he explores the consequences of following conscience for those coming of age. He authored the Regina Shen series—Regina Shen: Resilience and Regina Shen: Vigilance. This series takes place after abrupt climate change leads to the Great Collapse and a new society under the World Federation. A related short story is: Regina Shen: Into the Storm. Lance is also the author of unrelated short stories: Maiden Voyage and Watching You.

There is a tour wide giveaway for the blog tour of Regina Shen. These are the prizes you can win:
– a 25$ amazon gift card
– signed copy of Regina Shen: Vigilance by Lance Erlick (US Only)
– 3 signed postcards of the Regina Shen series (US Only)