I am so glad I could be part of the Gadget Girl blog tour! In this post I will have my review, information about the author and a tour wide giveaway which you can enter. You can check out the rest of the tour schedule. 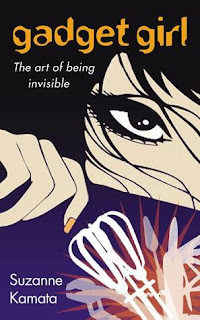 Gadget Girl: the art of being invisible
by Suzanne Kamata

Blurb from Goodreads: Aiko Cassidy is fourteen and lives with her sculptor mother in a small Midwestern town. For most of her young life Aiko, who has cerebral palsy, has been her mother’s muse. But now, she no longer wants to pose for the sculptures that have made her mother famous and have put food on the table. Aiko works hard on her own dream of becoming a great manga artist with a secret identity.

When Aiko’s mother invites her to Paris for a major exhibition of her work, Aiko at first resists. She’d much rather go to Japan, Manga Capital of the World, where she might be able to finally meet her father, the indigo farmer. When she gets to France, however, a hot waiter with a passion for manga and an interest in Aiko makes her wonder if being invisible is such a great thing after all. And a side trip to Lourdes, ridiculous as it seems to her, might just change her life.

My Review:
This book was different than I expected. I liked some parts and I didn’t like some other parts. I thought the beginning was a bit boring, but it did got better afterwards. I think the title and the cover are only part of the story and actually there is quite some different things going.

I thought the story started of a bit slow and a bit cliche. Beside the fact that Aiko has a disability and wants to become a manga artists there wasn’t much special. The first parts of the story mainly are about normal school life and then she goes to Paris, which also is a huge part of the book. It’s a bit of a recolection of what they do in Paris, it was nice, but not great. I was just lacking the feeling a bit and the story went everyone sometimes. In the end they return to the US and the story is wrapped up nicely and I actually felt like the story did go somewhere then.

I am not sure what to think of Aiko on the one hand I think it’s original to read a book about a child with a disability and how she deals with it. I think Aiko dealt with it very well at most times and the few times she didn’t I could also understand that. Sometimes I did think there was a bit too much attention to her disability. What I didn’t like about Aiko was her obsession with her dad and Japan, which seemed a bit strange. I understand she wants to meet her dad and see Japan, but sometimes it just was a bit too much. Also she does some things I didn’t like, but I did like how the grew at the end. She did become stronger and a better person troughout the story and she did change and learned. The side characters we learn most about are her best friend Withney and her mom. I did think we got to know enough about them to get a good idea of who they are. Although there are some things about her mom which didn’t make sense at first.

There also is some romance in this book, it was sweet, but I wsn’t really feeling it. Even so it doens’t go that far and I think it was paced well. There wasn’t much we learned about the love interest, but the romance was done pretty nice.

To conclude: Gadget girl was an okay story, but not great. The beginning was a bit slow and cliche, but the story did become better as it progressed. There were some things I liked about the main character and also some I didn’t. There was much going on and the end nicely wrapped it all up.

About the author:
Five-time Pushcart Prize nominee Suzanne Kamata is the author of the novels Gadget Girl: The Art of Being Invisible (GemmaMedia, 2013) and Losing Kei (Leapfrog Press, 2008), and editor of three anthologies – The Broken Bridge: Fiction from Expatriates in Literary Japan, Love You to Pieces: Creative Writers on Raising a Child with Special Needs, and Call Me Okaasan: Adventures in Multicultural Mothering (Wyatt-Mackenzie Publishing, 2009). Her short fiction and essays have appeared widely. She is the Fiction Co-editor of literarymama.com.
You can find her here:
Website
Goodreads
Twitter
And there is a tour wide giveaway!

2 responses to “Blog Tour: Gadget Girl: The art of being invisible by Suzanne Kamata”