This is my stop during the blog tour for Fairytale Apocalypse by Jacqueline Patricks. This blog tour is organized by Lola’s Blog Tours. The blog tour runs from 28 September till 11 October, you can view the complete tour schedule on Lola’s Blog Tours website here. There’s a guest post written by the author about being an indie author and visiting RWA. And there’s a tour wide giveaway! 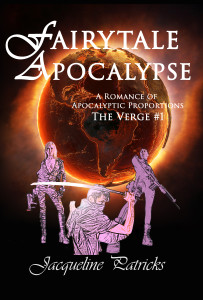 Blurb:
A romance of apocalyptic proportions

Lord Kagan Donmall rules the Verge, the border that protects the magical Fae Inlands from the mundane mortal world. Recently, the Verge has been failing and he suspects the source of magic is fading. His prayers to Danu have gone unanswered, until now.

The young mortal, Lauren Montgomery, hears the message of Danu and eagerly agrees to be the Lady of the Verge, for she desires more than a mundane life.

But Lauren’s twin sister, Tessa-ever her sister’s protector, challenges the decision. The Verge falls, and the Fae and mortal worlds suffer a double apocalypse.

Now Kagan, Lauren, and Tessa must survive in this new, hostile world and discover a way to repair that which has been destroyed while navigating the bonds of duty, love, and vengeance.

You can find Fairytale Apocalypse on Goodreads.

Being an indie author and visiting RWA
Times they are a-changing. Nearly two years ago, when I started self-publishing, the few writers that knew about it turned their noses up. A year ago, when told other writers I was self-published, many gave me ‘the look of so-sorry-you-had-resort-to-that-because you couldn’t get traditionally published’. Derision was the label. After all, being traditionally published was the only real way a writer could be validated. It was more than an achievement. It was an identity. Self-publishing challenges that.
Then a funny thing happened at the Romance Writers of America 2014 conference in San Antonio last month. Many of these writers stopped scoffing and started listening to self-published authors … intently. They started asking questions … intently. They started holding out their hand for my business card … intently—especially when I answered their questions about self-publishing with ease throughout the conference. Obviously I knew what I was doing, and it was just as obvious that many of the details I discussed weren’t even blips for them. They weren’t scoffing anymore, and they wanted to know more from self-published authors—we prefer Indie or Independent, by the way.
Why did they want to know? Because Indies are selling books, Indies are finding their audiences, and Indies are making money … today. Indies aren’t waiting for an agent to call them back, or a big-time editor to yank them from the slush pile. Indies aren’t writing 70 page book proposals to sell a book they haven’t begun to write. Indies aren’t submitting manuscripts over and over praying for a contract and a small advance.
No, Indies are writing books and selling them, every day. Indies are learning how to navigate the tangle of marketing, blogging, social media, and writing while taking a bigger share of the book market … every day. And Indies are getting better.
I’ve been telling people I’m Indie since I took the leapt in December 2012, but now I don’t give disclaimers or excuses. I shouldn’t have had to anyhow, so at RWA 2014 it was uplifting to have traditionally published authors and those still pursing traditionally publishing to ask me questions with wide-eyed awe.
Yep, times are a-changing. Indies are the up and coming rock stars of the writing world. Competition is getting fiercer as more authors became Indie and the quality of self-publishing increases. As they say, the cream will rise and any author who can’t keep up won’t sell. It’s getting real and I can’t wait to see what the future brings.

About the Author:
As a teen, writing became my passion, and like most aspiring writers, my work was terrible, immature, cliched drivel. I enlisted in the Army, attended college for my creative writing degree, became a paramedic for twenty years (one of the few at the time with a degree), then switched careers into IT. Crazy, huh? Throughout my life, I’ve traveled far and pushed myself hard, striving to try almost anything at least once (except skydiving unless the plane is on fire).

I write like I live. Come and explore my imagination.