I am so excited to be part of the Eden-South blog tour. I love the Eden series and Eden-South really is awesome. I will share my review with you and the rafflecopter of the tour wide giveaway. 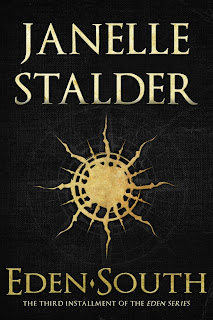 Blurb from Goodreads:
The betrayal that tore a family apart. Two brothers bent on destroying the other. A whole world on the brink of war.

Aiden has been through his second battle in the magical world of Eden. The victory is short lived and Aiden is sent racing toward his friends in the Capital. After being back in Eden with the Riders, he is eager to reunite with Wolf, Elisa and Logan, although he doesn’t realize just what he’s returning to. Surprises await him when he arrives in the Capital; his close-knit group of friends is slowly falling apart. On top of it all, another battle is just around the corner, one that will change everything.

Rain has made her choice, and now she is in some unknown fortress with the feared sorcerer, Aziz. She wants nothing more but to please him, but being his Queen isn’t as easy as she thought. While trying to learn sorcery, and dealing with Aziz’s advances, Rain is finding her new life a bit overwhelming. Just when she thought it couldn’t get worse, she discovers a secret of Aziz’s, and it is nothing she could have expected.

Rose has supported Callum throughout their journey, but now that the final battle is just around the corner she is faced with a hard reality. Everything she has gained with him could be taken away. Is she willing to live the rest of her life without him? Can she just stand by while he destroys everything, including himself? Will he ever be able to find peace? Will she?

In the third installment of the Eden Series fates will be decided, and the battle between brothers that has been a decade in the making will finally come to an end. Only one of them can be High King.

My Review:
Eden South was simple amazing! An emotional read and full of action. So much is going and happening in this book that I simple wanted to keep reading.

The story picks up little after the second book ended. The story is really well done and kept me wanting to read more and more just to know what would happen. It is again full of action and most parts are fast paced. there is also the big battle where the whole book is working towards and I kept thinking it couldn’t end well. I just had the feeling that any moment now a character I liked could be killed off.

The story is again told from multiple pov’s even though most of the characters are at the same place in this book. I still really enjoyed reading the different pov’s and the multiple point of views is still one of the things I love most about this book.. I especially loved Elisa and Wolf their pov’s, there is so much emotion and after what happened in the last book I just had to know how they would deal with everything. There also is a new pov in this book, namely from Rain. I actually have to say I didn’t really like her pov and it was one of the few things that mde me like this book a little less. Her behavior contradicted what she believed and I just didn’t understand why she did half the things she did. Also I just didn’t think she was a likeable character and I didn’t care about her side of the story. I still read everything, but I just didn’t like her and I didn’t think her pov added that much to the story. And the things I wanted to understand about her never were really explained.

The world building doesn’t progresses much, but there is enough going on and so much happening tha I didn’t really mind this. We already know most about Eden, but still there are a few new things we learn. Also there is hinted at some things and I hope we finally learn more about that in the next book.

To conclude: I really love Eden-South. The story is amazing and full of action. I still really like the multiple point of views, although there was one point of view I didn’t like. There isn’t much world building in this book, but I didn’t really mind as there is enough going on 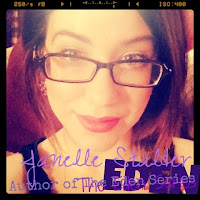 Janelle Stalder was born and raised in Brampton, Ontario. At an early age she developed a love for literature. Her debut novel, Eden, was the first book in a series of four, released in September of 2011. The second book, Eden-West, was released in July of 2012, and the third book, Eden-South was released in March of 2013. The fourth book of the Eden Series, Eden-East, will be release at the end of 2013. She is a strong supporter of other indie authors, and loves to interact with her readers. When she’s not writing, Janelle is at home with her husband, two children, Aiden and Elora, and her two furry children, Alice and Lily. She now resides in the small town in Ontario in her old, possibly haunted, century home.

You can enter the Rafflecopter for a change to win one of the awesome prizes. This is a tour wide giveaway.
a Rafflecopter giveaway