Today I am part of the blog tour for Deadly Kisses! 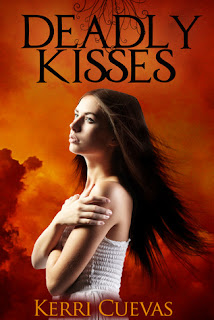 Blurb from Goodreads:
Aiden Grant has a killer kiss.  Literally. And it’s not every reaper who gets to work with the Sixteenth President. Sure, Honest Abe likes to throw out history lessons with reaping assignments, but when you’re favored by the ancients, grim reaper life is pretty sweet for a newly dead seventeen-year-old.
Then things get messy.

Aiden is assigned to reap the soul of Bee, the only girl he has ever loved. When Aiden’s kiss of death fails, intertwining their souls, she is still very much alive and they are both in trouble. The ancients want Bee, who has special powers of her own, and they’ll do anything to get her.

Some rules are meant to be broken, even if that means Aiden must bargain with his own soul to save Bee. Who knew the afterlife could get so complicated?

My Review:
This is one of those books that starts pretty good, but then halfway through I just lost interest. Also I think the cover doesn’t really fit the story. I just think I expected something different and while I was pleasantly surprised by the beginning it just fell flat for me around halfway through.

The story starts off immediately capturing my attention. There were some original twists to the whole reaper idea, like the fact that some reapers have gondola’s, I mean how awesome is that? I also liked that we got an introduction about a normal reaping and only afterwards the main problem was introduced. And until around halfway the story I realy liked it, I read the first half in one sitting and then gradually I just started liking it less. there were some evil guys introduced, which I didn’t really get their purpose and some plot twists just seemed a bit strange. Also I felt like I missing a bit of the background and kept waiting till it all was explained, only to have it not explained.

The characters mostly fell flat to me, characters are only one part of the story so if the rest is good I usually don’t mind it. The main character Ad is likeable, but I had difficulties understand his motives most of the time. also the romance was just done strange, these two character apparently have a past, but I didn’t really feel it. And then they fall in love quickly and there is someone else and it all is just a bit confusing. I didn’t really care about the characters and they didn’t seem to care about themself much either, it felt like they sometimes just wanted to kill themselves. they made some stupid mistakes and in my opinion they think a bit too lightly about death. Accepting it is one thing, but practically trying to kill yourself is something different.

The world building was interesting, but lacked depth. The idea why reapers exist is explained pretty early on and I liked the originality of this idea. I also liked the fact that they could kill with their kiss. But there just isn’t enough world building to make the world come alive. There are bit and pieces of world building here and there, but it just wasn’t enough for me. I wanted to know what the reapers did in their free time, how they lived, why those evil guys still roamed the earth, why nobody else figured some things out earlier. And for example it is mentioned that reapers can still eat, but then we never see any of them eat. Really if I was a reaper I would stuff myself with cake, cookies and chocolate the whole day.

I am now just starting to realize maybe I am not that into the reaper genre. I just have some difficulties with the whole hell and heaven concept and how reapers know who to kill and such.

To conclude: the story was pretty interesting and was actually the best part of this book. It was a quick read and I read the first half in one sitting. The character just fell flat to me and I couldn’t understand their motives and thought they acted a bit stupid at times. The world building was interesting, but there just wasn’t enough to make the world come alive.

You can add this book to your to-read list on Goodreads
You can buy it here:
– Amazon
– B&N
– The Bookdepository

Kerri Cuevas was born and raised in Rhode Island. She moved to New Hampshire with her husband, three kids, cats and a rabbit named Hercules in 2005. When she’s not writing, she’s chasing chickens on her small farm or searching for the ultimate mac-a-cheese recipe.

Kerri went to college for Early Childhood Education but now writes books for young adults full-time. Her storytelling stems from watching too many horror flicks as a teen, but she no longer needs to sleep with the lights on.