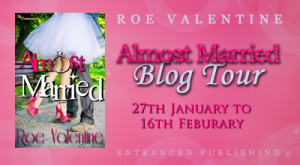 Today is my stop during the blog tour of Almost Married by Roe Valentine. I’ll share an excerpt of the book with and there is a tour wide giveaway.

Excerpt:
“You shouldn’t be here.”
Jacob shut his eyes. “According to?”
Silence.
The door pulled open, and there she stood. But that time, she wasn’t so smoothed down. In fact, she was barefoot and her long hair was tied in a bun on the top of her head. Her gray dress was wrinkled as if she’d been rolling around in the bed. His heart pounded. Beautiful didn’t begin to describe her.
“Your lawyer.” Her eyes lifted to meet his. Had she been crying?
“He doesn’t tell me where to be.”
She gazed passed his body, eyebrows slanted. “You should go.”
He didn’t step closer, though he desperately wanted to. Taking her in his arms was all he could think about. Especially if she was crying because of him. “What if I don’t want to?”
As her lips parted, he could see her deep sigh. She was tormented, and it was enough to make him steadfast in being there, while before he wasn’t sure why he ended up knocking on her door. Something had happened between them at his house, on the patio. He was more certain than ever.
She stepped aside, the hotel room coming in full view.
Stomach fluttering, he walked into the room. First thing he smelled was her vanilla perfume. The bed was unmade, pillows thrown. Clothes thrown over the wingback chair near the window. Shoes lined up near the dresser, though the flat ones she wore earlier were near the side table. He took it all in, remembering her hotel room from many years ago.
“I don’t know what else we can talk about, Jacob.”
He turned to her. The door shut with a loud snap. “Do we have to talk?”
Her eyes widened. “What else would we do?”
I have an idea. 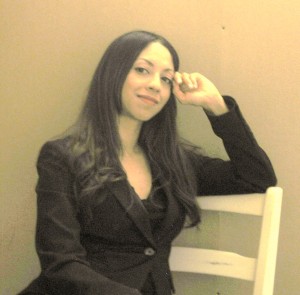