So this is the first time I actually participate in a trailer reveal. The trailer reveal of Open Minds. I guess it’s very similiar to a cover reveal, only then with a trailer.

With the help of over 20 cast and crew members, award-winning director Beth Spitalny has brought the concept of the bestselling Mindjack Trilogy to life on the screen.

I do have to say it is very different than I expected. It doesn‘t has the same feel as the book, but I do like how in the trailer you keep hearing everyone’s thoughts and I think that is done very well. It also makes me udnerstand a bit how difficult being able to read minds must be and how much thoughts you would hear. The person in the trailer doens’t look like I imagined the lead character, but I still envision the lead character as being the girl that’s on the book covers.

And  to celebrate the release of the trailer, the author has put Open Minds on sale! Normally it is $2.99 but now $0.99 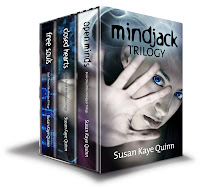 This sale only lasts a week, so grab your copy fast. And that’s not all, also the Mindjack Trilogy box set is on sale, normally $9.99, but now $7.99.This sale is also for one week only.

Susan Kaye Quinn is the author of the bestselling Mindjack Series, which includes three novels, three novellas, and a trailer. She’s currently writing a steampunk fantasy romance, just for kicks. When that’s out of her system, she has ambitious plans to embark on a series about the Singularity (the time when computers become more intelligent than humans) that should appeal to fans of the Mindjack novels. Or possibly play on Facebook all day. Could go either way.
So what do you think of this trailer? You think it’s a good trailer or not? And if you have read this series does this trailer correctly display how you think it looks?