What happened this week?
This week was a bit slower then the past few weeks. And while normally I don’t mind staying busy, this break was a nice change. I did a lot of baking and cooking again this week. For dinner I made Mixed Vegetable Curry, Simple Southwest Tofu Scramble and Brocoli Teriyaki casserolle, only I didn’t put it in the oven so it wasn’t really a casserole and without all the meat. Concerning baking I made those yummy Chocolate Snickerdoodles I mentioned last week again, but this time I left the chocolate and cacao out of the dough and added pieces of chocolate instead, as the chocolate flavour was less pronounced you could taste more from the cinnamon. And I made One Bowl Banana Bread Cinnamon Rolls, they tunred out really well! I really liked the addition of banana, they were especially good when they were still warm!

Concerning blog stuff I finally figured out a way to make sure wordpress doesn’t save all revisions anymore. I hardly ever use revisions, so I wanted to make sure wordpress didn’t keep all revisions. There’s a way to set a maximum on the amount of post revisions wordpress saves. Normally wordpress saves all revisions and I have a lot of those for most posts. What revisions basically means is that wordpress has multiple copies of the exact same post with minor differences and it saves those all, which is a lot. Especially for someone like me who often has at least 5 revisions for almost every post. And for Lola’s Blog Tours those amount of revisions get even higher, every time a new blogger signs-up for a tour I’ll add them to the tour schedule on the sign-up post and then during the tour every day I update the schedule. So yeah I had a few posts with eaisly into the twenties or thirties of revisions. I even came across the My Reviews page here on Lola’s Reviews which had over 84 revisions. And adding a simpel line to one of the core files set that maximum to 3. I am not sure if this makes my sites faster, but at leats it’s less data that needs to keep saved, so I am sure that’s a good thing.

Yesterday evening I watched a horror comedy movie with my boyfriend, it was called called Tremors. I normally don’t watch a lot of movies and stay away from horror ones, but my boyfriend really wanted to see it. It wasn’t really scary, but it wasn’t such a good movie either. I did like hearing the southern accent some of the characters had, never heard that before. The first half was a bit scary and there was a sad scene were some sheep got killed :(.

Beside that it was a relatively uneventfull week, just normal things like Lola’s Blog Tours work, scheduling blog posts for Lola’s Reviews and blog commenting. I also got quite some reading done this week. I read Wraith by Susan Kaye Quinn as soon as I got it and almost finished read Silver Shadows by Richelle Mead, both reviews will be posted next week! And next up is the next Debt Collector book by Susan Kaye Quinn.

Here’s a picture of the One Bowl Banana Bread Cinnamon Rolls. They tasted really good!

This week I posted about:
– Cover Reveal: Simple Beginnings by Janelle Stalder
– Read Play Blog #3
– Blog Tour: Secret of the Souls by Terri Rochenski – guest post
– Lola’s Ramblings: How do you use categories and tags?

Wraith is approximately 17,000 words or 68 pages, and is the first of nine episodes in the second season of The Debt Collector serial. This dark and gritty future-noir is about a world where your life-worth is tabulated on the open market and going into debt risks a lot more than your credit rating.

“The street-smart science of LOOPER meets the cold, just-the-facts voice of DOUBLE INDEMNITY in this edgy, future-noir thriller that will have you holding your breath, looking over your shoulder, and begging for more.” –Leigh Talbert Moore, author of The Truth About Faking, The Truth About Letting Go, and Rouge 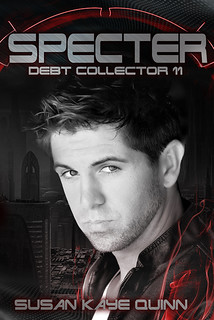 Wraith’s first encounter with Gehenna is not going to be her last. Her attempt to keep the two sides of her life separate is about to be stress-tested to the breaking point.

Specter is approximately 12,000 words or 48 pages, and is the second of nine episodes in the second season of The Debt Collector serial. This dark and gritty future-noir is about a world where your life-worth is tabulated on the open market and going into debt risks a lot more than your credit rating.