Until December 25th two books by the awesome Kendall Ryan are on sale. Unravel Me is just .99 cents and Make Me Yours (Unrvale Me #2) is 1.99. Do you love hot romance with a good story? Then you should read these books! Not convinced yet? Read my reviews of these two books below. 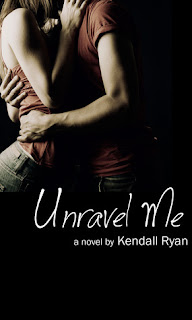 Unravel Me
by Kendall Ryan

Blurb from Goodreads: Psychology student Ashlyn Drake’s neat, orderly life takes a turn for the crazy when she finds the perfect subject for her amnesia thesis – a young man without any memory of his previous life, including the murder he’s accused of committing.

Against all common sense, Ashlyn’s drawn to him like a moth to a flame. Perhaps it’s that he’s so incredibly male, and even handcuffed to his hospital bed he could pass for a cologne ad – Scent de Insanity. Or perhaps it’s because she’s spent too many lonely nights studying. Either way, she’s determined to help him solve the mystery of his past. She begins to unravel who he was before, using his cryptic tattoos, and his paintings that scream of a dark past as her only clues. When she finally learns his secret there’s no telling which one is the real him, the gentle lover she’s fallen for or the troubled man with a dark past.

My Review:
When I agreed to read and review this book I expected a good romance story with a good story. I must say there was less mystery and story to it than I expected, but I did enjoy the story and the romance was done very well. I wanted to give this book 3.5 stars, but ended up rounding it up.

The plot was what drew me to this book in the first place a psychology student who is a nice girl and who falls in love with her test subject for her amnesia thesis. I liked the fact that the character was a student and I liked the mystery of the man she falls in love with. I was looking forward to seeing them figuring out who he was in his past life. Some parts of the story felt like they were moving too fast. I also felt like there was less mystery in it than I hoped for. There were also some parts that I didn’t like. But all in all I enjoyed the story, I liked reading a romance book with sex and a story. Although I do have to say that there was less story than I expected, there was still enough of a story to keep me interested.

At the beginning we miss a too big part of their beginning relationsh, because a huge part of this is summarized, I was dissapointed by this. I wanted to experience this part and see how they got to know each other. And I think theu author could’ve explained this in more depth.

The characters are actually not developed that well. I did like Ashlyn and the man she falls in love with, but I felt like there was so much we didn’t knew. Also there were times that Ashlyn described herself in a certain way, but her behavior was totally different. I think it would’ve been better if we had gotten to know Ashlyn how she was before she met him. I also think that sometimes the characters acted a bit unbelievable, of course I don’t know how a real amnesia patient behaves, but I have the feeling they would be clinging to everything that was familiar. And the side characters mostly felt like they were there to fill up the story, except for Liz, she actually played a part and we got a feel for her personality.

I did was a bit disappointed when we finally found out what this man’s past is. I had expected more mystery and then remembering small parts and struggling to remember more. But it was different and I just missed a bit of the mystery that I had expected.

To conclude: I enjoyed reading this book, but felt like some parts where a bit too fast paced and although the story was short it was the right size to tell the story. I liked the main characters, although sometimes they acted a bit unbelievable and the side characters were mostly used to fill up the story. I did enjoy the book and would recommend it to people who love a good story and some hot romance. 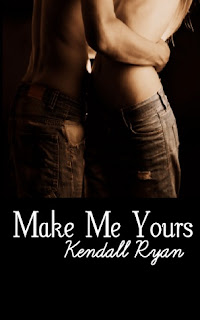 Make Me Yours (Unravel Me #2)
by Kendall Ryan

Blurb from Goodreads: Emotionally crippled Liz isn’t looking for a relationship when she meets delish boy-next-door, Cohen. He’s a few years younger, a volunteer firefighter, oh…and a virgin, making him totally off limits. But never one to back away from a challenge, she’s drawn to him even while she continues to satisfy her physical needs elsewhere.

Even as she spends her evenings in another man’s arms, she somehow finds herself curled up in Cohen’s bed each night. It’s been a long time since she had a true honest-to-goodness make out session, but Cohen’s showing her just how much fun not having sex can be.
When Cohen’s injured, her real feelings for him rise to the surface, and she has to decide if she’s willing to take a risk on love after enduring so much heartbreak in her past.

MAKE ME YOURS is the sexy conclusion to UNRAVEL ME.

Ashlyn and “Logan” from UNRAVEL ME also make a few, um *appearances* …ahem

My Review:
I was really excited when the author asked me to read this book, I read the first book in this series and really liked. And this second book is even better. I have read this book twice now already, first as a beta read and the second time the finished copy. Both times I really enjoyed this book and the fact that I can read a book twice this close afterwards means to me that it deserves those 5 stars. I almost never re-read a book and certainly not this fats afterwards reading it the first time.

The story from the blurb sounds like there would be less of a plot in this book than in the first book, but luckily that isn’t the case. The book mostly centers on Liz and Cohen and how they get to know each other, in this book that part isn’t skipped and I really liked seeing how they got to know each other. But there is also more to this story than Liz and Cohens growing relationship, Liz has her own problems to deal with and even Ashlyn and her story get some attention in this book. This book is just as fast paced as the first book. I had some problems getting into the story the first time I read it, but after that I just wanted to keep reading and see what would happen to Liz and Cohen. Also the second time when I read the finished version the beginning flows much better now and this book has really improved.

The characters are awesome! We really get to know Liz and Cohen. Cohen and Liz are so sweet together and I liked reading about them. I also liked the fact that even though this is Liz’ story we also learn what happened and is happening with Ashlyn and Aiden. I liked seeing things from Liz perspective and it was fun to see the friendship between Liz and Ashlyn from Liz perspective this time. And Cohen and Liz are so sweet together. Also there are some emotional parts in this book and I felt this make the story come more alive.

I like how this author manages to create a mix between a story and romance, the story is nicely done even though the focus is more on the romance. And the romance is hot and sweet at the same time.

To conclude: I really enjoyed this book. It’s even better than the first book and I liked reading about Liz. I also liked that we kept seeing Ashlyn and Aiden, even thought this wasn’t their story they still played a part. This book is a nice mix between story and hot romance.

2 responses to “Sale & Review: Unravel Me and Make Me Yours by Kendall Ryan”