I don’t post often about sales here on my blog. But this one is epic. The whole Eden series by Janelle Stalder is combined in one book is on sale for 0.99$! That is four books and a sneak preview of the spin-off series for only 0.99$. 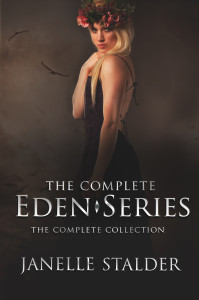 Blurb:
This edition is the complete collection of the Eden Series, including all four books –
Eden
Eden-West
Eden-South
Eden-East
PLUS an exclusive preview of the upcoming spin-off series, Elysium.
Individual books still sold separately.

“I don’t know if there are words enough to describe this series accurately. It’s exactly what YA fantasy should be like.”
– Alana Rock from Dark Obsession Chronicles

“All hail Janelle Stalder!!!!! Her Eden series doesn’t disappoint. She grabs you from the start and doesn’t let go until you are so enamored in this amazing world she has created. Her words are like poetry, they flow and mingle and leaves you breathless.”
– Julie Sumner from Up All Night Reviews

“The author pulls us into their world, and by the time the book is over, we want to go back. Go back to Eden and relive the experiences again. This is one of those books where when you’re through reading it, you miss the characters.”
– Emerald Barnes, Author Piercing Through the Darkness

Eden is an epic Fantasy ride, following a young boy who is thrown into a world on the brink of war. Along with an ensemble cast of captivating characters, he begins a journey that will change his life and make him question everything he’s ever known.

Here is the blurb of the first book Eden:

Trapped within the cruel world of hormones and bullies, fifteen-year-old Aiden is convinced life has more to offer him. His instincts are proven correct on the night he is awakened by a voice calling to him from outside his window. As he sleepily peers into his yard, his eyes slowly focus on a woman who says she is there to take him to Eden. Aiden is about to fulfill the life purpose he never knew he had.

It is in Eden, a land on the brink of war, where Aiden will finally learn to trust himself and those around him. Accompanied by Wolf, his sidekick Logan, and the beautiful archer, Elisa, Aiden is soon thrust into a battle to save Eden. Meanwhile Elisa, the only girl in the King’s Army, is in the midst of her own struggles. Betrothed to a man she has no intention of marrying, Elisa is caught between the need to prove herself and her desire for true happiness. And now that she has met Aiden, she is more confused than ever.

In this action-packed fantasy tale, romance, adventure, and intrigue surround Aiden as he learns just what he is capable of when he discovers confidence and courage. 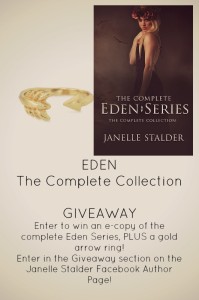 You can add the Eden series complete edition to your to-read list on Goodreads. You can view the four seperate books here.