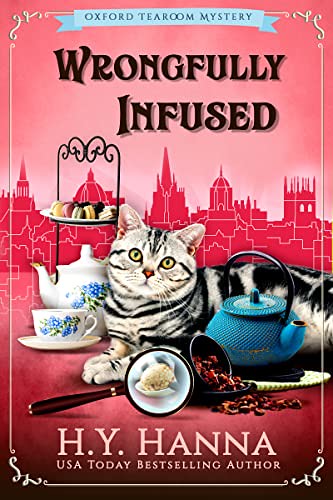 Blurb:
When a trendy “tea bar” opens up in the same Cotswolds village where Gemma’s quaint English tearoom is situated, she suddenly finds her customers being stolen and her business the target of sabotage. Things go from bad to worse when the ruthless rival owner of the new tea bar is mysteriously murdered and Gemma is considered the key suspect! With her detective boyfriend Devlin O’Connor in hot water, accused of nepotism for helping her, Gemma is forced to tackle the case on her own. Luckily, she can still count on the help of the nosy Old Biddies, while the naughty antics of her tabby cat Muesli uncover some unexpected clues too!
But with a full menu of suspects—from a belligerent chef who lost everything to estranged sisters hurt by the ultimate betrayal—Gemma discovers that solving this mystery is no piece of cake…

Wrongfully Infused is the 11th book in this series following Gemma, a tearoom owner, and the mysteries she gets involved in. I enjoy this author’s books, but lately they’ve been a bit hit or miss for me sadly. I feel that I’ve read so many of them that they start to feel a bit similar in how the characters act and how things progress. I was looking forward to this new book, but sadly this one was a bit of a mixed one for me. There were parts I enjoyed and others that I didn’t.

As with the previous books in this series it’s an easy read and I like how the mystery has plenty of suspects. It kept me guessing for a long time, but I managed to solve the mystery shortly before the main character did. I liked seeing how Gemma looked at all different angles, but didn’t like how she investigated some of the things and how she handled her involvement.

This book has a bit of a tricky situation with how her boyfriend usually handles these cases, but he is now suspect of giving police information to Gemma. And with Gemma being a suspect in this case another police officer handles the case. Not only did this book suffer from one of my pet peeves in cozies namely incompetent police officers, there was also the whole situation with how Gemma couldn’t get involved as it would look bad for her boyfriend. Devlin, her boyfriend asks her not to get involved as it could risk his job and chance on promotion, but Gemma does so anyway.

I know it wouldn’t be a cozy mystery if Gemma wouldn’t get involved, but I just didn’t like how she handled things with Devlin and getting involved in the investigation. On the other hand Devlin isn’t the best boyfriend either, always putting his job first and not being understanding of Gemma. They don’t really communicate well in this week and I didn’t really like seeing where their romance went in this book. There are a few nice scenes with them together at the start, the overall air of miscommunication and them not being on the same line bothered me.

It was lovely returning to this series and the familiar characters. There are plenty of fun scenes with Muesli again, as well as Gemma’s mother. I also liked getting to know the Chu family and leaning something about Taiwanese culture and customs. I didn’t really care for the whole situation with the tearoom and the competition and the way it got resolved in the end. I would’ve liked to see a bit more of the process of what they did and see things slowly change. It felt a bit too easy and sudden now. The ending wrapped things up nicely.

To summarize: Unfortunately this book was a bit of a mixed one for me, while some parts where quite good others didn’t quite work for me. I liked being back in this series and seeing the familiar characters again. It also was fun to get introduced to some new characters and learning some things about Taiwanese culture. I liked how the mystery had plenty of suspects and reasons why people wanted the victim dead. It kept me guessing for a bit, but I managed to solve it shortly before the main character did. I didn’t like the way Gemma got involved and handled some things with the investigation and how she did something her boyfriend explicitly asked her not too. I didn’t like how their romance progressed in this book as they didn’t really seemed to communicate well and handle things well. I also didn’t like how incompetent the police were, that’s one of my pet peeves in cozies. All in all I still had a fun time reading it, but wasn’t able to enjoy it as fully as I would’ve liked.