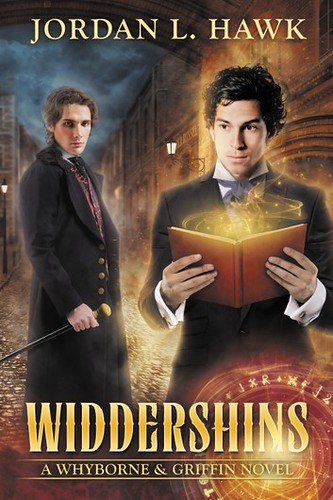 Blurb:
A reclusive scholar. A private detective. And a book of spells that could destroy the world.

Love is dangerous. Ever since the tragic death of the friend he adored, Percival Endicott Whyborne has ruthlessly suppressed any desire for another man. Instead, he spends his days studying dead languages at the museum where he works. So when handsome ex-Pinkerton Griffin Flaherty approaches him to translate a mysterious book, Whyborne wants to finish the job and get rid of the detective as quickly as possible.

Griffin left the Pinkertons after the death of his partner. Now in business for himself, he must investigate the murder of a wealthy young man. His only clue: an encrypted book that once belonged to the victim.

As the investigation draws them closer, Griffin’s rakish charm threatens to shatter Whyborne’s iron control. But when they uncover evidence of a powerful cult determined to rule the world, Whyborne must choose: to remain safely alone, or to risk everything for the man he loves.

Widdershins is the first novel in the Whyborne & Griffin series, where magic, mystery, and m/m romance collide with Victorian era America. Buy it today and join the adventure.

After having read another one of Jordan L. Hawk’s series I decided to finally give this series a try as well. Widdershins is a great start to this series. It combines different elements well together in an engaging story. This book has a historical setting, a mm romance, fantasy elements, Lovecraftian themes and monsters as well as some mystery. And it all works great together.

Widdershins follows the point of view of Whyborne, who mostly keeps to himself and focuses on his job at the museum. His careful controlled life is being thrown in disarray when he meets Griffin. Griffin needs help translating a book that’s in cypher, but along the way they discover a lot more. As they try to solve the mystery of someone’s murder they gets pulled into something much bigger.

I wasn’t quite sure what to expect from the book and while it took me some chapters to really get into it, I quite enjoyed this book. At first I wasn’t sure if this book would have fantasy elements as those only come to light later and I like the subtle way this gets revealed when the main characters realize there is more to this world. And then there are the creepy monsters, which I definitely hadn’t expected. It gives the book an unique feel. The further I got the more interested I got and the more we discover about the world and this mystery they’re trying to solve.

I liked getting to know Whyborne and see him fall in love with Griffin. Whyborne is a bit of the stereotypical shy bookish guy, but I liked that as we got to know more about him there was more to his character. And where Griffin was so put together and capable, when we learn more about him and what he’s been through he becomes a lot more human too. I liked that. It was fun to see these two grow closer and then fall hard for one another. There is a bit of drama here and then, but not too much, although I did get annoyed at a certain scene later on where Whyborne doesn’t let Griffin explain. I liked where things are left at the end and look forward to reading more about these characters.

I also really liked Whyborne’s best friend Christine, whose always there for Whyborne. I liked her personality and her interactions with Whyborne. There are some other side characters as well, some we find out more than others and there are some unexpected turns involving some of them.

The world building is done well, but I also very much feel like we’ve only discovered the first bit of what really goes on in this world. This book only slowly shows the barest hint of what more is out there and while that really worked here I am also curious to find out more.

To summarize: I enjoyed reading this book. This book took me by surprise and I liked the intricate combination of genres, from historical to romance to fantasy with lovecraftian elements. I liked following Whyborne along as he meets Griffin and his life changes forever. Together they try and solve a mystery and discover there’s more to the world than they knew. The characters both clearly have a type and feel a bit stereotypical at first, but I liked how there is more depth to them as you get further into the story and I enjoyed getting to know these characters and see their relationship develop. The story is as interesting as the romance and I liked how they two blend together to form a great book. I liked what we see of the world and look forward to seeing more.