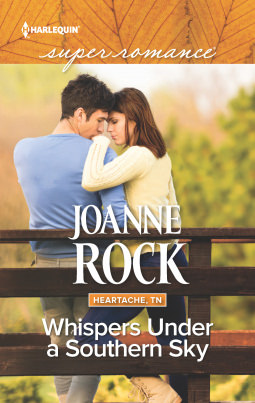 Whispers Under a Southern Sky (Heartache, TN #4)
by Joanne Rock

I really enjoyed the first 3 books in this series and then forgot all about it somehow. Until I saw a post about this series on social media and I remembered this series so fondly I dove right into Whispers Under a Southern Sky, the fourth book in the Heartache series. At first I was a bit lost, trying to remember the events from the first 3 books. While this book can be read as a standalone I think it’s best read in order as there are some plot lines that carry throughout the series as well as previous characters playing a role in future books.

I really enjoyed Whispers Under a Southern Sky. I like how this series has every book told from three point of views, the main couple as well as a teenage girl who somehow is related to either the characters or to the plot line. In this book the teenage point of view is Bailey, the best friend from Megan who we got to know in book 3 and her story is related somewhat with that of Sam and Amy. She has own story and a bit of romance too. Then we have Amy who left Heartache years ago and is now finally returning as well as Sam who is the sheriff of Heartache.

I loved the second chance romance between Sam and Amy. It was awesome seeing them reconnect to each other and getting to know eahc other again. They both have some things they have to deal with and I liked seeing them both grow throughout the book. I thought they made for a great couple. Their struggles and the way their romance developed felt realistic. There was a bit of drama towards the end with Amy jumping to a weird conclusion without talking to Sam that I didn’t care for, but I liked how Sam set her straight. I would’ve loved to see an epilogue, but as some plot lines likely won’t be wrapped up till the next book it makes sense the way this one ends with a few threads left open.

I liked both Sam and Amy. There was a lot more to them than you see at first and I liked learning more about them as the book progressed. I liked reading about them and seeing them interact with eahc other and other characters. Amy’s reunion with her family felt realistic and heartfelt and it was awesome to see her reunite with them. I also liked reading about Bailey. I think the addition of a teenage character adds to the story and I liked how Bailey ties into the case that Sam is working on and how she becomes the babysitter for his infant son.

To summarize: This was another solid read in this series and I am glad I picked it up. I enjoyed the story and the romance. Amy and Sam made for a great couple and I liked their second chance romance. It was fun seeing them reconnect and get to know each other again and then deepen their relationship. I also liked the addition of Bailey’s point of view, she has her own struggles and a bit of romance too. Amy and Sam were both great characters and I liked reading about them and seeing them develop throughout the story. There are a few threads left open and I am looking forward to read the fifth book.

4 responses to “Review: Whispers Under a Southern Sky by Joanne Rock”