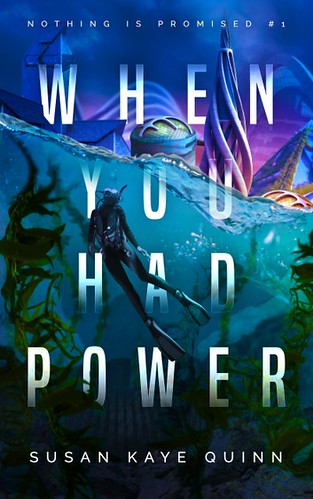 Blurb:
For better, for worse. In sickness and in health.

It’s a legal vow of care for families in 2050, a world beset by waves of climate-driven plagues.

Power engineer Lucía Ramirez long ago lost her family to one—she’d give anything to take that vow. The Power Islands give humanity a fighting chance, but tending kelp farms and solar lilies is a lonely job. The housing AI found her a family match, saying she should fit right in with the Senegalese retraining expert who’s a force of nature, the ex-Pandemic Corps cook with his own cozy channel, and even the writer who insists everything is stories, all the way down. This family of literal and metaphorical refugees could be the shelter she’s seeking from her own personal storm.

She needs this one to work.

Then an unscheduled power outage and a missing turtle-bot crack open a mystery. Something isn’t right on Power Island One, but every step she takes to solve it, someone else gets there first—and they’re determined to make her unsee what she’s seen. Lucía is an engineer, not a detective, but fixing this problem might cost her the one thing she truly needs: a home.

When You Had Power is the first of four tightly-connected novels in a new hopepunk series. It’s about our future, how society will shift and flex like a solar lily in the storms of our own making, and how breaks in the social fabric have to be expected, tended to, and healed. Because we’re in this together, now more than ever before.

I was excited to start this new series by Susan Kaye Quinn. I’ve read most of Susan Kaye Quinn’s books and I always enjoy them. When You Had Power is a Science Fiction book, or Hopepunk as the author calls it. It’s set in the future, but not so far off that it’s hard to imagine it becoming reality. In fact it felt quite realistic. It follows the point of view of power engineer Lucía who gets entangled in a big conspiracy when she tumbles on some things she shouldn’t have seen. Instead of staying quiet she’s determined to find out what’s going on and stopping it.

When You Had Power was a great start to this series. I liked discovering this futuristic world that was relatable, but also showed what could happen to in future both for good and bad. There are big environmental disasters and plagues, but also humanity bonding together to get through it all. The pace of the plot is well done with the story progressing quite quickly, but never feeling rushed. Lucía stumbles upon the first signs of a bigger plot/ conspiracy quite early on and the story progresses from there onward with her diving deeper into this. I like how far she gets in this book, but it also feels like there is still so much we don’t know and I am excited to see what happens next.

Lucía was a great main character. She felt real with how she had emotions, wishes and dreams. I liked her longing to find a family to belong. I also liked how open and vulnerable she was at times. She is afraid her new possible family won’t be what she wants and also afraid it is what she wants. Instead of shielding herself, she decides to open herself up and give it her all. I thought this was great to see. I also like her determination to go after what it is she discovers and to find out what’s going. I liked the concept of how in this world you get adopted into a family and live with them. It’s like the concept of chosen family that you find in books, but then it actually being a legal thing here.

There is quite the big group of side character too, I think about 6 people in her new family and then a few people outside of her family too. I liked how they all seem to have their own personality, but I would’ve liked a bit more time to get to know them all especially the possible new family members. With the story taking up a big chunk of the book and how that developed and a lot of the characters only being present early and later on, at times it doesn’t feel like there’s enough time to get to know everyone. I did like how Lucía stays in touch with them through communication methods and how we see a bit more of Joe as well. Hopefully in future books we get to see even more of them. There is a hint of romance as well and while things move fast I liked them together and with how they confide in one another quickly it did feel like they bond quickly and deeply.

I liked getting the feel of how the world is different than ours and what had changed. It was fascinating to read about all the ways they now create power and the technologies that they use. I liked how there clearly has been some advancement, but it’s also not so far in the future that everything’s different. I liked the concept of the power island and the things like turtles and the virtual reality type thing they have. It’s a bit overwhelming at first to take everything in, but it was great to learn more about the world and understand how everything worked. I also like how encouraging/ positive the whole world building feels, there is ofcourse a nefarious plot line, but in general it was quite positive with how they are fighting the climate change and trying to undo the damage to the planet. It’s not a dystopia, but also not quite an utopia. The author calls this genre Hopepunk and I think that fits the vibe of this book.

To summarize: This was a great start to this new series. I liked discovering this futuristic world and how things changed and how things are the same to our current one. Lucía was a great main character, I liked her vulnerability, her openness and her determination to find out who was behind the strange things she find. There are a bunch of side characters and I liked how the author gave them all their own personality. I just wish we would’ve seen more of them as the majority of the side characters are only there are the start and end of the book. There is a hint of romance here as well and while it progresses quickly I liked them together and it felt like they bonded quickly and deeply too, so it feels fitting. I liked the world building, seeing all the new technologies and how they handle the climate change and power issues. There is something very positive and hopeful about it all, even with the bad things that are going on, overall it presents a positive version of a possible future where humanity works together for the greater good. This was a amazing start to this new series and I look forward to the next book!