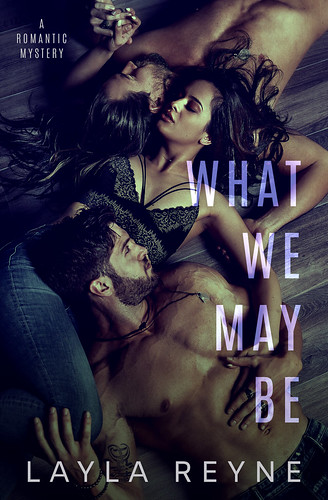 What We May Be
by Layla Reyne

Blurb:
What we were…

Sean found love once, with his college roommate, Trevor, and Trevor’s best friend, Charlotte.
The missing piece, Sean made it possible for Trevor and Charlotte to find love too.
But then Sean left and took the love with him.

Now an FBI agent, Sean is back in town, ten years later, to investigate a murder.
A case that pits him against his ex-lovers—Charlotte, a local detective, and Trevor, a literature professor sucked into the Shakespearean mystery.
Everyone guards their hearts, but before long, desire sparks anew the feelings that burned hot a decade ago. That still burn true.

What we may be…

Love is within their grasp again, but as the killer escalates, it’s more than just their hearts and futures on the line.
Sean, Charlotte, and Trevor will need to work together to solve the case.
If they can’t, lives will be lost and pieces of their love gone for good.

I received a free copy from Gay Romance Reviews and voluntarily reviewed it.

When I saw that cover I knew I wanted to read this book. I also loved the sound of the blurb with the romance between three people as well as a suspense plot line. And having read some of Layla Reyne’s contemporary romance books, I was excited to try one of her romantic suspense books. Unfortunately I didn’t enjoy this book as fully as I had hoped. I read this one during a stressful week, but instead of providing the escape I was hoping for, I had trouble to fully get into the story.

I had some trouble getting into this book. We’re thrown in the middle of a scene with lots of characters and their connections to one another and some history between then. And I had some trouble connecting the dots and getting a feel for who everyone was. There are quite a few side characters and while most of them have their own personality, it does take some time for me to really get a good handle on everyone. Not everyone gets as much page time or is as fleshed out. Then shortly after that there is a time skip and after that I felt like it got a bit easier to get into the story.

What We May Be has a great mix between suspense and romance. The story switches back and forth between the two and intertwines them in an interesting way. Unfortunately I wasn’t as invested in the suspense element as I had hoped. The murders are kinda creepy with the serial killer enacting murders from Shakespeare. I somehow didn’t get as invested or intrigued with the mystery. And I didn’t really have the brain space to try and figure out who the killer was. Late in the book I did settle on a suspect. For the motive I was thinking in the right direction, but the murder was someone different. I don’t think it would be easy to figure out who had did it from the clues alone as I don’t think they’re too many clues in that direction, but I might’ve missed something. I also skimmed the chapters told from the point of views of the victims as I thought those were creepy, so I might’ve missed some clues because of that.

While I liked the romance and the way this author wrote such an interesting romance between three characters, I just wanted to see more of it. With the way the investigation and romance are intertwined it feels like the romance is always progressing, but there aren’t as many quiet character focused scenes. It is a second chance romance, so it has the benefit that a lot of the romance already got established in the past, but I would’ve loved to see some more scenes where they get reacquainted and figure out what has changed in the meantime. The scenes that dealt with that I enjoyed.

I really liked how these 3 characters are so close together and also know their relationship doesn’t work unless all 3 of them are in it. I thought that was an interesting set-up and I liked the way their dynamic worked best with all three of them involved. I also liked how each of them had a solid band with the other two. Charlie and Trevor are best friends and I liked how they always have each other’s back. Where Sean is the one who left them and over the course of the story they figure out why and see if they can make it work again.

I have to say I didn’t really care for the reason Sean left, it just seemed like not a good enough reason they they wouldn’t see each other for 10 years. I also think this might be starting to become a pet peeve of mine as I have had trouble with second chance romances this year. There’s just something so sad about all that time they lost because of a lack of communication. And with how strong their love is, I just didn’t buy it that they never looked for one another earlier.

To summarize: This book has an interesting set up and a good blend of romance and suspense elements. The suspense didn’t quite work for me. The murders were kinda creepy and I just wasn’t as invested. I also think the actual murder would be hard to guess as I can’t recall many hints in that direction. This book has a lot of characters and history between them, which made it hard for me to get into the story at first, but it gets easier as the story progresses. I would’ve liked to see more focus on the romance as that was the part that interested me the most. I liked the poly relationship in this book and the dynamic between the three characters. I didn’t really care for the reveal of why Sean left the other two years ago, but I liked how they’re trying to make it work again now. I liked the three of them together and how they’re there for one another. I just would’ve liked a few more quiet or touching scenes as those were the ones I liked most. Definitely a solid read if you like romantic suspense books.

4 responses to “Review: What We May Be by Layla Reyne”