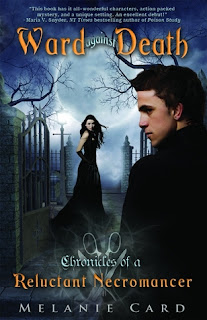 Ward against Death
by Melanie Card

Blurb: Twenty-year-old Ward de’Ath expected this to be a simple job—bring a nobleman’s daughter back from the dead for fifteen minutes, let her family say good-bye, and launch his fledgling career as a necromancer. Goddess knows he can’t be a surgeon—the Quayestri already branded him a criminal for trying—so bringing people back from the dead it is.

But when Ward wakes the beautiful Celia Carlyle, he gets more than he bargained for. Insistent that she’s been murdered, Celia begs Ward to keep her alive and help her find justice. By the time she drags him out her bedroom window and into the sewers, Ward can’t bring himself to break his damned physician’s Oath and desert her.

However, nothing is as it seems—including Celia. One second, she’s treating Ward like sewage, the next she’s kissing him. And for a nobleman’s daughter, she sure has a lot of enemies. If he could just convince his heart to give up on the infuriating beauty, he might get out of this alive…

The book is about a necromancer (something I don’t read about that often)who revives someone from the death and decides her help find her murderer. I really was pulled into the story and wanted to know what was going to happen. After a while it just seemed like the character were running in circles and nothing really happened for a while, the characters made some stupid chooses and then the ending was action packed again. I just expected something more, the mystery about her death was easy to solve, but the characters just didn’t seem able to figure it out.

The characters were likeable, I especially liked Ward and his naivity and clumsiness. He was a really enjoyable character and I liked him with all his flaws, it made him seem like a real character. I also liked Celia, although she was a bit too much of the stereotype assassin. And some times she really acted like an awesome assassin, but at other times she acted really dumb. Also I think that the characters made some stupid mistakes and I hated the fact that if they only just talked about things, they would’ve actually solved anything. Also sometimes it was just too much thinking about things and i got confused because of it.

At the end of the book there are still many things that aren’t resolved and the ending felt a bit abrupt. You are left quessing what will happen next.

To conclude: the book started out really good and I liked the characters, but eventualy I lost my interest and got annoyed at the stupid descisions the characters made. There was hinted at world building, but there wasn’t enough explanation to really get what was going on.